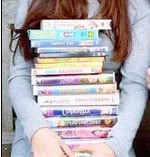 My kids are outgrowing more than their clothes: We now have dozens of DVDs that are considered too “babyish” for my precocious offspring. Instead of just leaving them in an ever-growing pile in my basement, I’m sending my stack to Kidflicks.org who forwards gently used DVDs to children’s hospitals and pediatric wards.
Kidflicks was started about eight years ago by two smart sisters, Marni and Berni Barta who donated their own video castoffs to a local pediatric ward, and were told that kids who enter the hospital request movies more than anything else to help pass the time. Now, rather than send a few DVD’s here and a few more there, I love their approach: Once they have 100 movies, they send that entire movie library to a hospital that needs it.

So far, more than 500 hospitals in the U.S. and South Africa have benefited from the generosity.

Let’s be honest, there are plenty of children who will appreciate Elmo Learns the ABCs much more than that box in your basement does. –Christina visit Kidflicks to find where to send kids’ DVDs or to make a monetary donation
Tags: Africa, charity + causes, eco friendly, movies + media for kids, recycled