Warning: Reading this book during pregnancy will make you pee yourself. Even more. 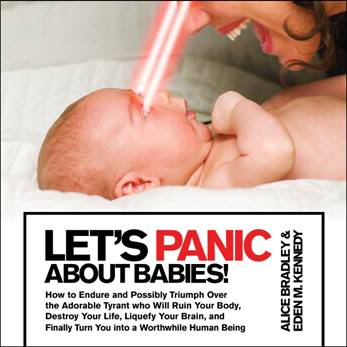 We have eagerly been awaiting the Let’s Panic About Babies book every since we first became pregnant with our own babies. And that’s saying something. Because back then, we didn’t even know anything about authors Alice Bradley and Eden M. Kennedy, how funny they are, or that they were even considering writing a book together. That’s just how awesome this book is: It transcends the impossible!

If you’ve ever seen the Let’s Panic About Babies Website, you might have an inkling of what to expect–new babies referred to as “recently freed fetal captives,” and the suggestion that your first month of pregnancy means it’s time to stop trolling the docks for anonymous sex at night.

In other words, Let’s Panic About Babies (full name: Let’s Panic About Babies: How to Endure and Possibly Triumph Over the Adorable Tyrant Who Will Ruin Your Body, Destroy Your Life, Liquefy Your Brain, and Finally Turn You Into a Worthwhile Human Being) is clearly not for those who read satire then say, “Are they being serious? That’s offensive! I would never troll the docks for anonymous sex at night!”

The book is sarcastic, a little bawdy, and more insightful than you might expect. (The authors name the fifth month of pregnancy “the smug month.”) With clever sidebars, laugh out loud quizzes, and lists like socially acceptable places to barf, it really is a whole lot of fun. However don’t expect to read it for advice; unless you appreciate advice like the real reason to avoid eating bologna during pregnancy is that the baby will grow up to live in a van.

The one negative: Reading it might make you pee a little. Fortunately you pregnant ladies have an excuse. –Liz