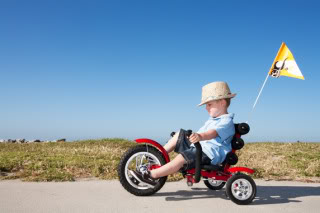 Our garage is filled with bikes, trikes, scooters and even one Skoooch, but I’m a big believer in “you can never have too many outdoor toys.” So, I’m always on the lookout for cool new ride-on, kid-powered things that can hold their attention for at least as long as the latest Wii game.
For some of my favorite “tried and true” ride-on toys, check out our Scooter Smackdown and Second Scooter Smackdown from past years. But if you’re looking to get something that no one else on your block has yet, keep reading.
For toddlers, I’m not sure I’ve seen anything as neat as the Mobo Mini Cruiser (at top) which blows my memory of the Big Wheel out of the water. Nice and low to the ground, this would be a great first three-wheeler for kids as young as 30 months, and the adjustable frame will keep them comfy up to five years.
Steering looks really intuitive for little kids, with the handles at the sides and the recumbent position means they can relax against the padded backrest without tumbling off. Mobo has even addressed my concerns about low-to-the-ground vehicles by including a safety flag—very smart.

We have loads of scooters, but the kids have been bugging me for an electric one so they can really zoom. Unfortunately for them, that isn’t going to happen, though I think I’ve found a scooter that will give them the “zoom” they want, but will keep them moving and not passively standing still.
The Zike is kind of a hybrid between a bicycle, a scooter, and those exercise stair climbers at the gym. Kids stand on two “pedals” and by shifting their weight back and forth the Zike moves along. The entry-level Hotshot is made for kids between the ages of 5-8; kids need to have enough balance to keep it steady on single-file wheels.
We haven’t tried the Zike out yet, though from what I saw of the bigger-kid models at this year’s Toy Fair, they look sturdy and easy to master.

Despite its “I’ve got to be crazy to try this” name, the CycoCycle isn’t quite as “psycho” as it is fun. Looking like an oversized tricycle without handle bars, I imagine this is as close to the feeling of riding on a unicycle I’ll ever get. The CycoCycle glides along on big soft tires and feels really sturdy though it did tip a few times as we were learning to turn on it. One note: No brakes—but the wheels don’t turn unless you pedal so I was able to keep from speeding pretty easily on a slope, though this is not one to take to the top of a hill and let her rip unless you’re 14 or covered in bubble wrap.
It took me many tries to get the hang of it, but my less fearful ten year-old was riding around the driveway effortlessly in about five minutes. Her eight-year-old sister also picked it up quickly, though my six-year-old wouldn’t go near it– it’s a bit high off the ground for smaller kids.
Get tired of pedaling, and the cycle turns into a makeshift scooter that trickster kids will have doing wheelies and spins. And at around $100, this seems really reasonable for such a unique toy that has already gotten so much use in the week we’ve had it.-Christina
Target has great prices on the Mobo Mini and the CycoCycle, which is also available with free shipping at Toys-R-Us. The Zike is currently for sale only at the Zike website.
Tags: bicycles, gifts for teens + tweens, kids' toys, outdoor fun, outdoor toys, scooters, tweens + teens