Pixar’s Brave review – A princess movie without a handsome prince 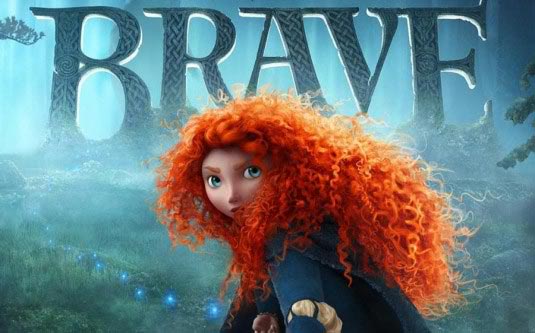 It’s kind of hard to believe that Disney produced the wonderful new “princess” movie Brave. After all, there’s no handsome prince, no fantasy dance scene in a sweeping gown, and no dead mother. What there is is a strong (super strong) female lead, and a lot of big bears.

My girls, 5 and almost 7, simply adored Brave and so did their
mama. It’s beautifully produced, funny on both a kids’ and an adult
level–something John Lasseter is pretty awesome at–and dramatic enough
to keep you interested right through the very end.

Brave is the
story of a 10th century Scottish princess named Merida, an animated
Katniss Everdeen of sorts, whose preferences in life are to ride her
horse fast, shoot arrows, and think for herself. When, according to the
kingdom’s protocol, the three major clans send in their sons to compete
for her hand in marriage, she takes a cue from mythology’s Atalanta and
rejects the tradition.

Without giving away spoilers (please, don’t read any spoilers because it’s so fun to watch Brave
unfold knowing very little about the story), it’s more a love story
between a girl and her mother. In fact, unlike most princesses who fall
victims to bad magic or their own vanity–or that of some other jealous
female character–turning into frogs, eating poison apples, or sleeping
for 100 years. Here in fact, it’s her own mother who becomes a victim,
which leads to a far greater lesson than self-preservation or catching some prince.

The voices are just wonderful, with Kelly MacDonald
as the lead, Billy Connolly stealing the show as Merida’s father the
King, Emma Thompson as Queen Elinor, and the clan lords hilariously
played by Robbie Coltrane (Hagrid!), Craig Ferguson, and Kevin McKidd.

There
are a few caveats for parents of course. There’s a whole lot of cartoon
violence as the clans pummel each other with abandon. It’s similar to
the tavern-goers in Tangled
(though less inebriated), and nothing worse than you ever saw on Bugs
Bunny as a kid. There are a few less cartoon-y moments with vicious
bears which can be pretty intense for skittish kids; my five year-old,
who is very sensitive to tension of all kinds, buried her head in my
shoulder a few times, although she promptly recovered.

In fact,
skip the 3-D if you’re on the fence. Extra cost aside, I’d imagine giant
bear fangs are only scarier when they’re flying into the theater right
at your head. That said, my theater was packed with kids, from about two
on up, and I hardly heard a peep throughout the film. It’s just that
captivating.

Also know there’s one teeny joke in there about the king’s
stock of mead which kids will never get anyway unless you explain it (I
did). There are a few no-undies under the kilt jokes. And there’s a very
brief moment in which the king shows affection towards his beloved by
smacking her on the rear–a sight my own kids are not entirely
unfamiliar with. Ahem.

But overall, what I get from this movie
is a super strong female lead, a self-actualized princess, true,
long-lasting love between the King and Queen, and a beautifully strong
mother-daughter bond. Plus I like that my older daughter is now excited to try out her
“Brave” moves in the playground when the boys are playing ninja.

Ironic that we had to go back 11 centuries to find a princess who’s just perfect for this one.

Bravo Pixar. Brave
is guaranteed going to be a frequently watched DVD in our home. My kids
are already begging to see it again, and it has hardly been 24 hours. –Liz

Pixar’s Brave is out now in a theater near you. It is rated PG.