Wishing for a great kids’ CD? Throw a Penny in the Wishing Well 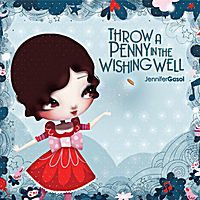 My singing voice is best kept in the shower. But that didn’t stop me from singing to my kids when they were younger, though I’d usually do it along with the lovelier voices of Laurie Berkner, Frances England, and Charlie Hope. (I think my kids appreciated this.)
Here’s another wonderful voice I can’t help but sing along with. I think you will too.

Canada’s Jennifer Gasoi recently released her second kids’ CD, Throw a Penny in the Wishing Well, and it is packed with 18 oh-so-pretty original tunes. And though the lyrics speak directly to kids who might wonder How Does Pink Lemonade Get Pink?, her voice and diverse backup instrumentation make this a pleasure for grownups as well.
At times I felt like I was listening to music from decades ago, as in the title song with its 50s doo-wop vibe, or in I’m a Bubble which comes in with a 1940s-style harmony at the chorus. I especially adore Hey There Joe which contrasts her bright, cheery voice with the grittier bluesy style of Grammy-nominated Eric Bibb. And Cherry Tree has such a fun calypso sound, it warms us up as we dance around the kitchen on a chilly morning.
Although there is a huge range in the many different musical styles, this CD feels totally cohesive–probably because Jennifer herself stays true to her own sound. In other words, you won’t hear her snarling through a rock song or adopting a faux country accent.And when she sings the French-language Les Etoiles Dansent, it will make you hope she’s working on a lullaby album–in any language–right now.

Grab a copy of Jennifer Gasoi’s Throw a Penny in the Wishing Well from her website or from CD Baby.
Tags: kids' music that's actually good