Personalized books for kids that will blow their minds. And yours. 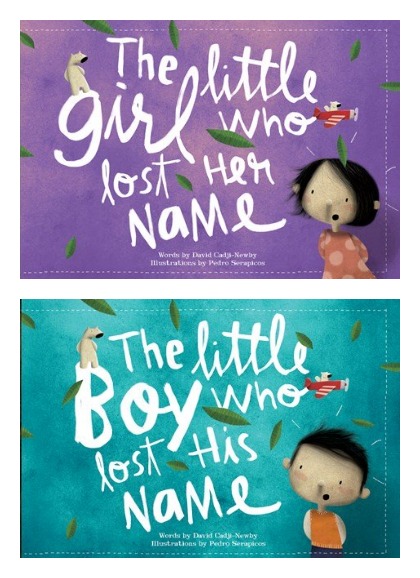 We’ve looked at many personalized books for kids over the years. Some are really lovely; others, not so much. Now there’s one more to add to the lovely column, but with an extra-special touch that makes it way more impressive than any I’ve seen.

The difference between the Lost My Name Books and others that simply incorporate your child’s name or details about them is that the entire story is customized–not just a few name mentions scattered about here and there. That means every single book is completely different–what a genius gift if you have more than one child to shop for.

The story is a stunningly illustrated adventure of a girl or boy who wakes up in the morning to find his or her name on the bedroom door is missing, prompting a wild quest to find it. Here’s the kicker: For every letter in your actual child’s name, there are four pages of a mini adventure between the hero and a clever animal or creature whose name starts with the same letter.

So for example, my daughter Sage meets a squid who has gotten his tentacles all tangled up doing multiplication tables, helps him out, and he’s so grateful that he gives her an S from his name with the hopes it helps her too. After that, she gives a lonely aardvark some company, appeases a vain giant, and helps a confused animal to identify that she is an elephant.

My daughter Thalia, on the other hand, met six different characters including my favorite, an angel who wants to play rock-and-roll instead of harp music. Nice touch–multiple letters in a name yield multiple characters, so no, “Ella” and “Molly” won’t be reading about the same lion twice in a row.

David Cadji-Newby’s story itself is not an afterthought at all. The rhymes are clever, the characters and the words, evocative. It’s nice to read about crossing “a wide and frothing river” or a yeti “with an existential gripe.” Just be aware this is British English, so, you know…colour.

The well-placed touches of humor are delightful as well, brought to life in Pedro Serapicos’ illustrations. Imagine an ice fishing Inuit who hates the cold and would rather be sunbathing in Greece. (Yeah, my kids liked him too.)

I also love that the printing and thick, eco-paper stock are about as nice as I’ve seen on a book like this. You will not end up with pages missing after a few days, that’s for sure.

The Little Girl Who Lost Her Name reminded my girls of one of their other favorite books, the excellent The Well At the End of the World, in which an intrepid princess uses kindness and cunning on a quest to save her father, and is rewarded along the way by every magical creature she encounters.

It’s nothing short of magical to experience that moment that your child realizes the characters are helping to spell out her own name. And trust me, you will witness that excitement over and over–at least if you have my six year-old who won’t put the book down. And then afterward, the girls want to trade books and see all the other possible stories too.

Get The Little Girl Who Lost Her Name or The Little Boy who Lost his Name from Lost My Name Books. They’re $29.99 plus shipping and you can see a preview on site–though some pages may be slightly different than the ones you receive. Thanks to the publisher for sending one for review.