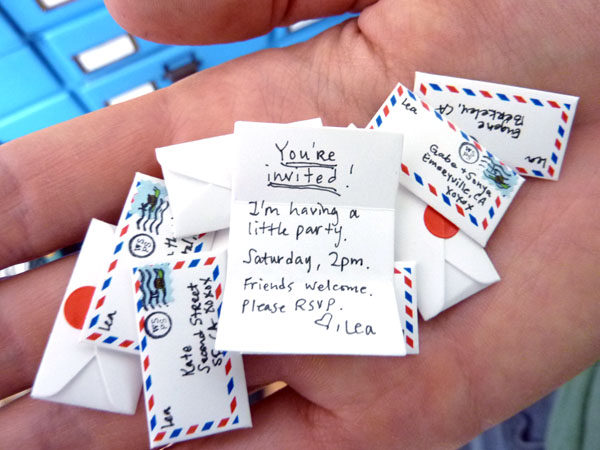 Letter writing isn’t a hobby I would have imagined my almost-seven-year-old daughter would become obsessed with, especially with our love for Rainbow Loom still strong. The Tiny Mail Activity Kit from Leafcutter Designs has caught on fast, though, and turned her and her friends into letter-writing maniacs.

Five years ago, we discovered the company that has offered the clever World’s Smallest Post to send tiny cards, letters and packages through US mail on behalf of …oh, say, the Easter Bunny or the Tooth Fairy. Now they’ve launched a DIY letter-writing kit, and we’re hooked.

When my daughter first opened one up, she was beyond excited by all the stuff in there. This thing is truly loaded with lots of cards and envelopes (both tiny and those big enough to mail through the USPS), tiny parcel boxes, wrapping paper, stickers, and twine. The deluxe version even includes rubber stamps, lined notebook paper, and security envelopes for those super-secret if still very small messages.

This kit goes firmly in my “Why didn’t I think of that?” category. There’s just something so much fun about tiny things, especially for kids, and the creatives at Leafcutter Designs get it. I’d order it as an end-of-the-year gift for the kids in my daughter’s class, so they can stay in touch in a fun way over the summer, or as a just-because gift for my cousin who lives out of town. I have a feeling the tiny mail craze is just getting started, so it looks like I’ll have plenty of time to spread the letter writing love.

Order your own Tiny Mail Activity Kit with a pledge of $29 to Leafcutter Designs’ Kickstarter Campaign. Higher pledges will score you more stationery goodies, but they’ve already met their goal. Yay!