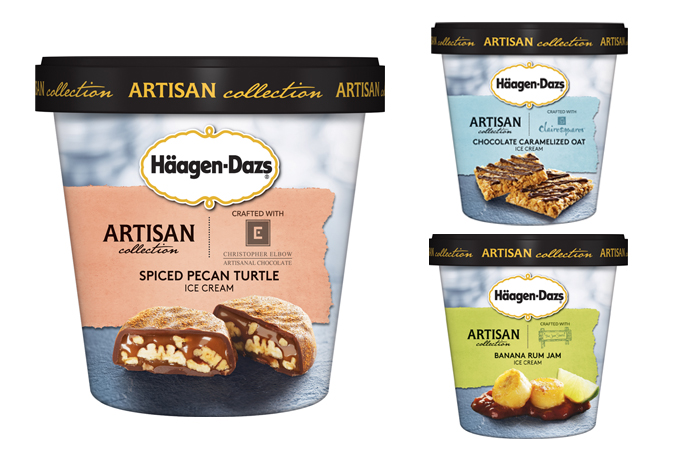 Though I’m a big fan of the artisanal food movement, there are some products from big food brands that I just can’t live without, and Haagen-Dazs ice cream is one of them. I grew up eating the stuff—their butter pecan is still a favorite—and am beyond excited that they’re getting into the artisanal food spirit now too.

This April, Haagen-Dazs will be launching a new line of flavors, the Haagen Dazs Artisan Collection, each of which has been developed with a culinary artisan entrepreneur over the course of a whole year. They’ve taken each artisan’s goodie, from cookies to jam, and turned it into a killer ice cream flavor that honors the original indie roots of what was once a little mom-and-pop run ice cream company, which made only vanilla, chocolate, and coffee.

Here are the flavors we’re looking forward to. Oh, and the following is safe for work if you don’t mind your co-workers seeing you drool.

Tres Leches Brigadeiro
Inspired by the Brazilian brigadeiro bonbons made by Paula of My Sweet Birgadeiro in New York City, this flavor converts her Happy Couple candy into a chocolate-vanilla bridadeiro sauce that’s swirled into a tres leches ice cream.

Oh, and if you don’t know what a brigadeiro is, think a dense, creamy truffle-like bite made with chocolate and condensed milk. Sold? Me, too.

Banana Rum Jam
My kids and I are big fans of the Drunken Monkey Jam made by Jessica and Sabrina of The Jam Stand, so I’m psyched to try this vanilla ice cream swirled with a sweet combination of bananas, rum, and lime. No worries: Nearly all of the alcohol in the rum is cooked off, so this can be enjoyed by your little one, too, in case you’re wondering. But I happen to like my fancy ice cream just for me.

Applewood Smoked Caramel
This is the most adventurous of the new Haagen-Dazs flavors thanks to pastry chef Cruz Caudillo’s proclivity for combining sweet and savory. Inspired by his creations at Praline Patisserie in San Diego, Cruz and Haagen-Dazs created a sweet cream ice cream tangled with applewood smoked caramel and almonds. If you’re a sweet-salty person, I’d say this is the flavor to start with.

Spiced Pecan Turtle
Kansas City’s Christopher Elbow Artisanal Chocolates are among the finest in the country. Christopher and Haagen-Dazs riffed on of his beloved spiced pecan turtles to make this chocolate ice cream mixed with caramel swirls and chocolate-covered spiced pecans. My mouth is literally watering just typing those words.

Related: Jeni’s Splendid: Is it the best ice cream in the country?

Ginger Molasses Cookie
I happen to live within walking distance of The Good Batch, a cookie bakery to die for, and can personally vouch for Anna’s ginger molasses cookies. The fact that Haagen-Dazs has chosen to make a cinnamon vanilla ice cream combined with Anna’s cookie pieces is proof that they know exactly what they are doing and are doing it well. Perfectly, even.

Chocolate Caramelized Oat
I’d never heard of Clairesquares  before, but man am I happy to know about these Irish treats now. In homage to the combination of shortbread, caramel and chocolate created by Clair herself, this new flavor features caramel ice cream blended with chocolate-covered oat clusters. Which is great because I’ve been looking for a way to eat more healthy oats and this totally counts.

These artisanal ice cream flavors sound out of this world, but, more than that, how cool is it that Haagen-Dazs is supporting these indie food makers? Not only are we about to have access to some of the most amazing new ice cream flavors I’ve encountered in a while, but now we also know about Clairesquares, The Good Batch, and more.

Now that I’ve gotten you all hot and bothered…well, we wait. I imagine it will be worth it.