The ABCs of Game of Thrones: A is for Arya 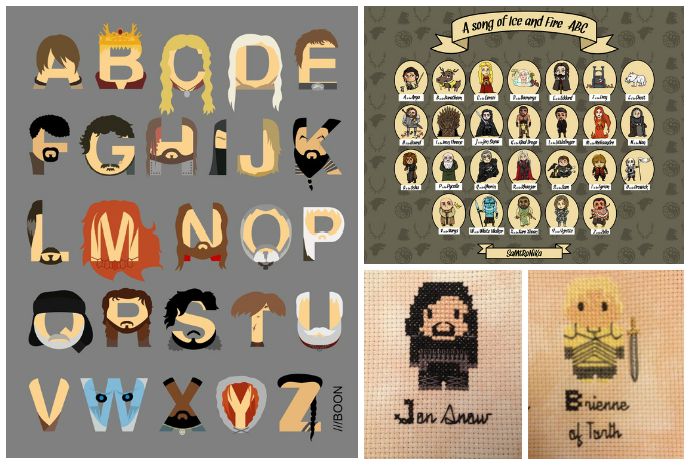 Hi, my name is Liz and I’m obsessed with Game of Thrones. So I’m cheering that the show has earned 24 well-deserved Emmy nominations — though oddly, no nods for comedy after that really bizarre Sandsnake fight scene in Dorne. In any case, while our children may be too young to watch the show (I told mine that 30 was an appropriate age), they’re not too young to know that W is for Winterfell. Or White Walker. Or, WHAT THE $&*!-ING  $&^%! which is pretty much what I screamed as the closing credits rolled after every episode this past season.

Okay, maybe kids are a little young for that too.

So just for you cool GoT loving adults, I rounded these extremely awesome Game of Throne ABC picks. Or as the Dothraki might say, Hazi davrae!

We’ve shared the wonderful alphabetical cross stitch work from this Etsy shop before, including homages to geekery from Harry Potter to Star Wars to Dr Who. I love Delilah’s original idea to just use the letters you want to spell out a child’s name or family name. That’s pretty Cersei – Osha – Osha – Littlefinger.

Game of Thrones Alphabet Print ($18 by Mike Boone at Society 6.)

I really love this print which personifies all the letters by turning them into the characters themselves. They’re so good, I don’t even need a key for most of them — is there any mistaking Danaerys, John Snow, or Melisandre? (Man I hate her.)  Also available as a mug, phone case, tee, or very cool tote.

For something a little more graphic and less cute, check out this tee. I love the style though I admit I question some of the letter choices. F is for Fear? T is for Targaryen and not even Tyrion? HOW CAN YOU FORGET TYRION?! Hm…I’ll have to think about that one. And why I’m so upset that I’m using all caps?

I kind of like this ABC poster which feels like a family tree. And props to the Iron Throne making the I slot.
Nice touch considering that’s what it’s all about.

It’s not for sale but I can’t stop examining the wonderful detail Amanda put into each character, with extra emphasis of the great female characters including Ygritte, Arya, and Margarery and Olenna Tyrell. Even Sansa Stark, who deserves way more prominence in these ABCs. Hey, she’s going to be an X-Men!

For bonus nerdery points, check out the artist’s really impressive Instagram account and you catch shortm time-lapse videos of her creating each character.

You Spawned listeners may know Kristen hasn’t yet caught up — as in, she has watched zero episodes of Game of Thrones — but I’m working on her. Any help is welcome.

We’ve been trying to turn that ugly debate into