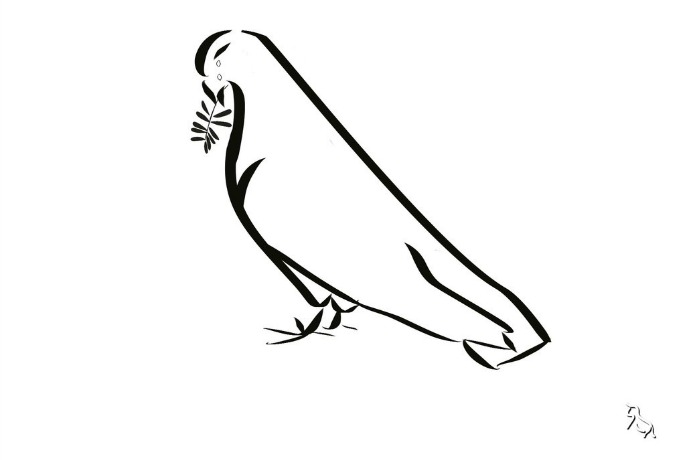 When we first wrote this post in 2015, Kristen and I had each gone to bed distraught, waking up no less unsettled after the news about two mass shootings in San Bernardino and Savannah —  the 354th and 355th in the US in 2015 alone.

November 6, 2017,  the day after 26 people were murdered in a Texas church, and 36 days after more than 500 people were gunned down in Las Vegas, we updated the post.

Then again in 2018 after Parkland.

And now, after the domestic terrorism incidents in El Paso and Toledo — less than 12 hours apart — here we are again.

When these things happen — as they continue to do — we alternate between outrage and grief, wondering just kind of world we are raising our children in right now. Especially when in an average year, more than 17,000 US children a year are injured or killed as a result of guns, and nearly 115,000 Americans as a whole.

As far as we’re concerned, even one is one too many. 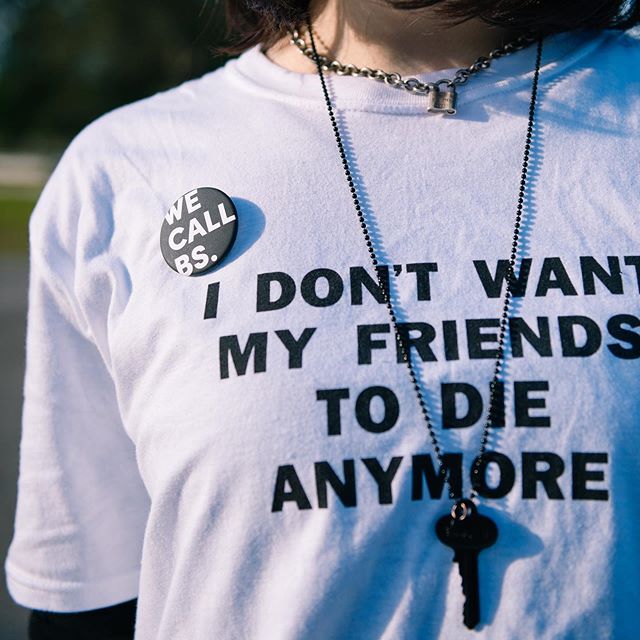 While this is not a political site per se, we have never shied away from sharing the causes, concerns and values that are dear to us personally. In fact, our values are what our network was founded on when Kristen and I first got together back in 2006.

And so, after much discussion, we decided we would be remiss if we didn’t talk about unnecessary gun violence today, and what we can do about it.

We’ve see so so many of our readers on social media sharing feelings of hopelessness, and asking just what can be done — if anything at all. And so we felt it was important to share a few organizations advocating for common sense changes to legislation.

When we say common sense changes, we’re talking about policies like:

-Mandatory background checks for all gun purchases, universally, across all 50 states.
-Keeping guns out of the hands of those with records including a history of domestic abuse in part through red flag laws/extreme risk laws.
-Closing loopholes that currently allow individuals on the terrorist watch list to purchase guns.
-Closing the gun show loophole.
-Strengthening concealed carry laws and regulations on silencers
-Keeping guns stored more safely to prevent family fire
-Establishing insurance for gun owners, as well as ammo regulation and limits
-Banning high-capacity magazines, some of which can hold up to 100 rounds of ammunition
-Reinstating federal funding for gun violence research through the CDC, and allowing it to be treated as the public safety issue that it is — a measure supported by more than140 medical organizations, representing more than one million American health professionals.

Also, we need to take a hard look at why civilians need unfettered access to military-style assault weapons and high-ammunition clips.

We think these measures make good, common sense. They are research-based, and data-driven solutions.

A recent Pew Research Center poll about gun laws indicates that a vast majority of Americans support these initiatives. Gun safety is not a partisan issue. Even the AAP is getting involved in a letter to congress, calling firearm-associated death and disability now “a major public health threat to American children.”

Take look at the work of these organizations and find strength in a likeminded community. Not all of them may be right for you to support, but perhaps one is.

Also, we always remind you to look for the helpers. But you’re an adult. It’s not enough. You need to find the helpers, support them, give money, give time. 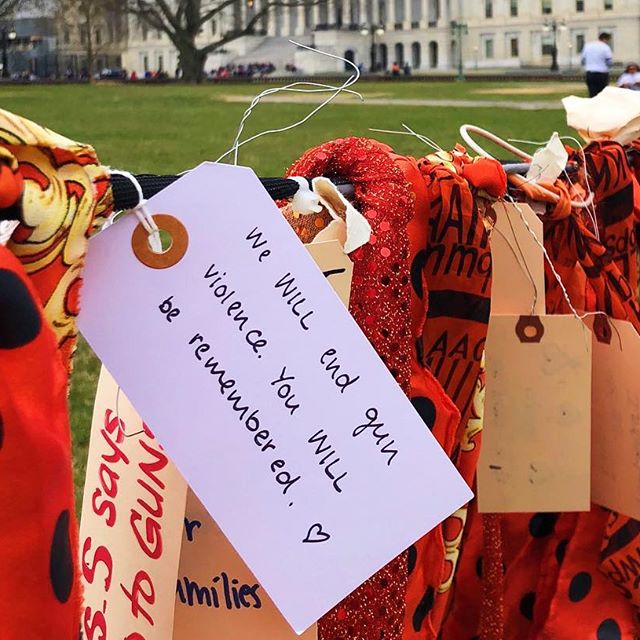 Brady United (Formerly, The Brady Campaign to Prevent Gun Violence) was started by Sarah Brady and the late James Brady, former press secretary to Ronald Reagan, who was seriously wounded in an assassination attempt on the President. Their aim is to reduce US gun violence 25% by 2025, with specific campaign initiatives including educating responsible gun owners about safety at home, expanding background checks, ending family fire, closing unregulated online gun purchases, and mobilizing young people in the fight against gun violence.

Giffords Courage (formerly Americans for Responsible Solutions) was founded by Congresswoman Gabby Giffords and her husband, retired Navy Captain and astronaut Mark Kelly. They work to reduce gun violence and support lawmakers who support responsible policies through national coalitions made up of an impressive list of veterans, law enforcement officers, faith leaders, educators, parents, and responsible gun owners. They are

Everytown for Gun Safety is a union of the bipartisan organization Mayors Against Illegal Guns (co-founded by former NYC Mayor Michael Bloomberg and former Boston Mayor Thomas Menino) plus Moms Demand Action for Gun Sense in America, a nonpartisan group mobilizing mothers at the community level. They’re a vocal presence on social media (as are @momsdemand) and have had enormous impact in the fight for gun reform in a short period of time. 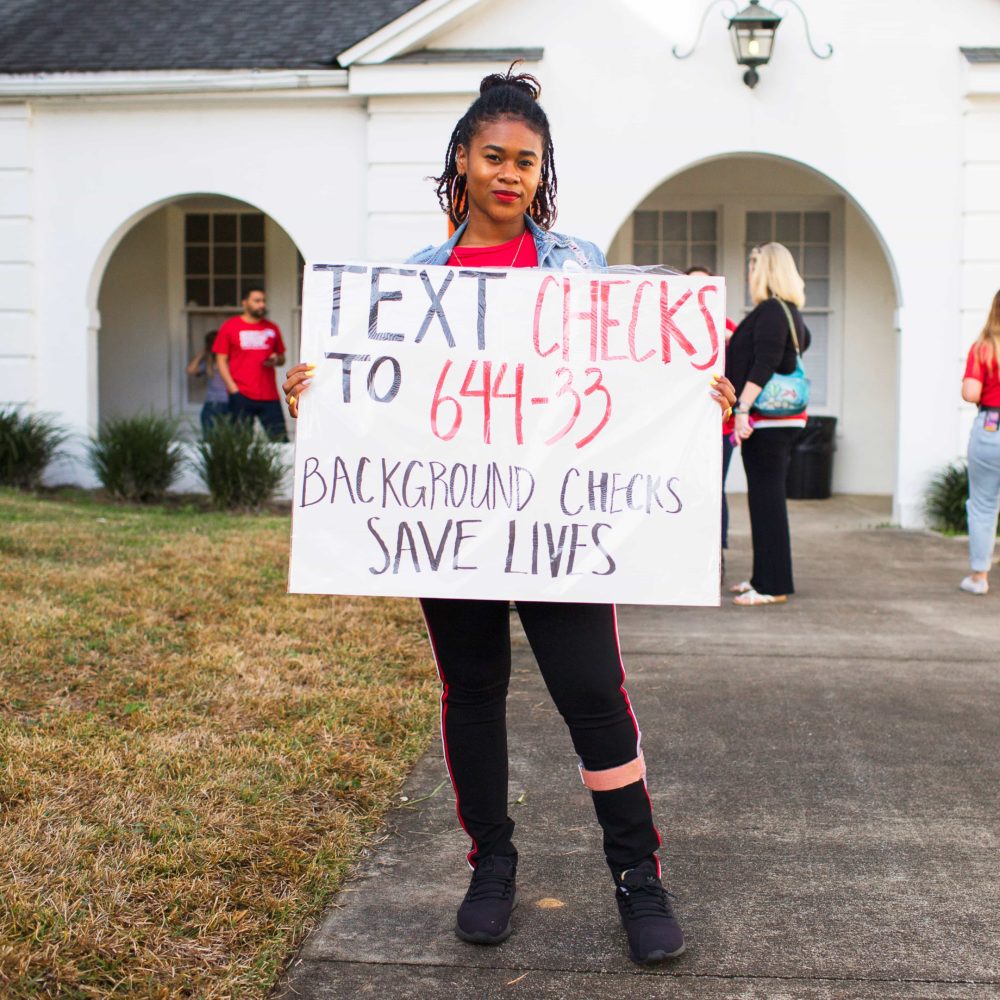 Moms Demand Action deserves their own recognition since we first wrote this post. Founded by powerhouse (and mom of five) Shannon Watts, there is now a chapter representing this grassroots movement for more public safety measures in all 50 states. They have been incredibly impactful at changing law at the local and state levels, with focuses on issues like responsible gun storage, disarming domestic abusers, keeping schools safer, and updating background checks. They have an excellent resource center for more info on their site.

Students Demand Action is another offshoot of Everytown, engaging young activists to help end gun violence in our communities. With our own children growing up in the midst of a gun violence crisis, they encourage students to get involved by organizing and starting chapters in their own schools, universities, and community centers. 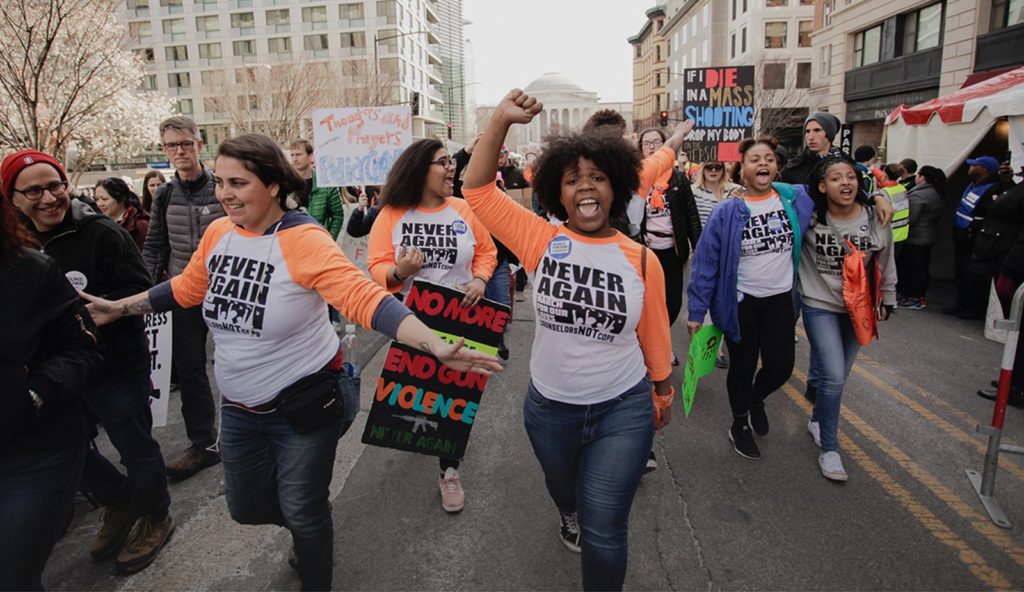 March for Our Lives (above) was founded in the days after the shooting in Parkland, FL, by the students of Marjory Stoneman Douglas High School. They’re activating young people to advocate for common sense gun reform in part by holding voter registration drives and supporting gun-sense candidates. They are also working to fund gun violence research and intervention programs, eliminating the ATF’s oversight restrictions, disarming domestic abusers, pushing for universal background checks, advocating for safe gun storage and mandatory theft reporting and more.

The Newtown Foundation was founded in the wake of Sandy Hook, to provide comfort, education, scholarship, support and resources to those impacted by gun violence in America. Their goal is to help all American communities move forward together to create a positive cultural change towards a more peaceful, less violent future. Every year since 2013, they have have sponsored national vigils and remembrance events, including the National Vigil for All Victims of Gun Violence 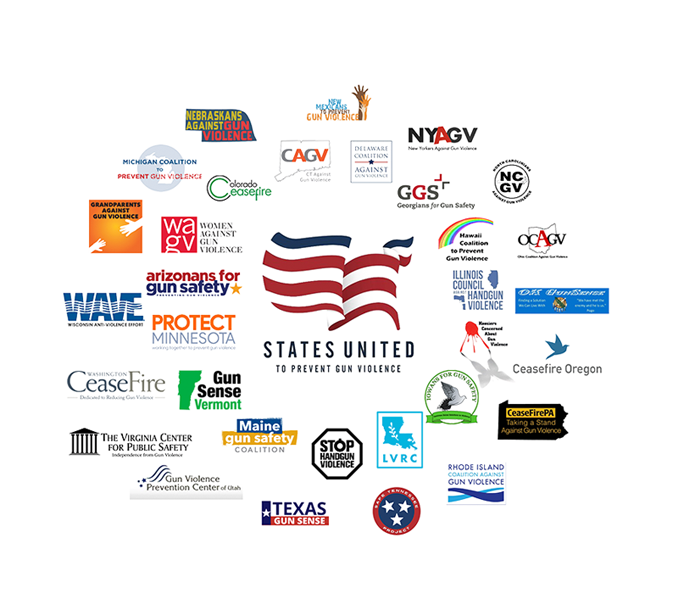 The Trace This is an independent, nonpartisan, nonprofit journalism startup dedicated to shining a light on America’s gun violence crisis. They focus on the communities most impacted, report on possible fixes, and collaborate with other publications, creating content like this interactive atlas of American gun violence with data gathered from Gun Violence Archive

Faiths United to Prevent Gun Violence is a faith-based, interdenominational group supporting specific legislation to increase criminal background checks, eliminate high-capacity weapons, and criminalize gun trafficking on the federal level. They are not a non-profit, so they are not asking for support. They are just out there doing the work on a grassroots level.

What else you can do

Doing something always makes us feel better than doing nothing. (And by the way, doing nothing is not working to help stem this epidemic.)

–Start with he US Congress and Senate: This link takes you to the contact info for all federal, state, and local elected officials. These are all individuals who have sworn an oath to represent your interests, and you have the right to tell them what those are. You can also visit this call your Senator webpage, type in your name, number and zip code, and your phone will connect automatically. Or Text “enough” to 877-877 for an automatic connection.

–Here’s what to say when you contact your member of congress — you can even use an app, or your own texting app when you register with Resistbot.

–Please visit the Action Plan for Ending Gun Violence, a Google Doc created by our friends at Feed Our Democracy.  You’ll find a list of 10 actions you can take to prevent gun violence, plus handy fact lists, links and resources, organizations to follow on social media, and more.

This matters to us 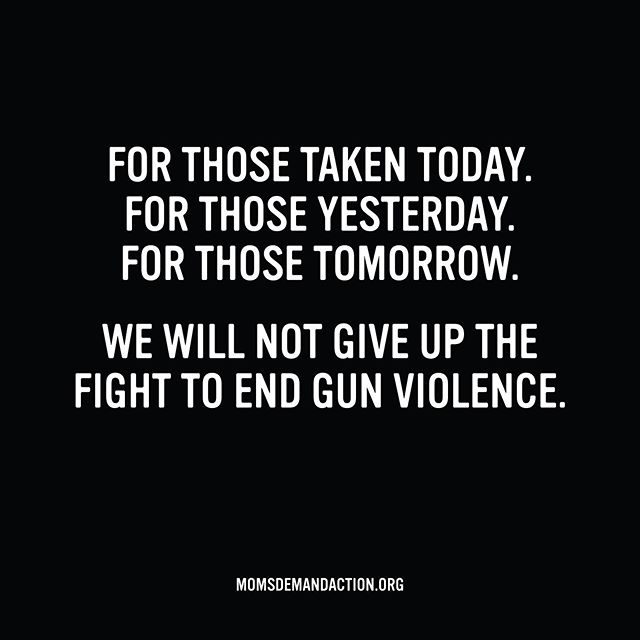 We have military members, hunters and gun owners in our families too. We understand the complexity of the issue. We are not posting to start comment fights or encourage trolling. (In fact, trolls are not welcome here, sorry!)

We are moms who care about kids and their well-being. Over the years, we’ve discussed everything from crib safety to food safety to car seat safety to ways to eliminate preventable childhood deaths from diseases like polio with vaccinations — for which so many of you showed your amazing support with donations and social shares.

We hope with those same big hearts of yours, you can also consider ways to eliminate preventable firearm deaths in this country.

We know that this is a site that many readers visit as a way to escape the horrible news of the day. Self-preservation is absolutely understandable; if you would rather look at our gift recommendations, play a game of Candy Crush, or binge watch Netflix, then by all means do what you have to do. But after you’ve t taken a break, we certainly hope you’ll get back to fighting for a safer world for us all.