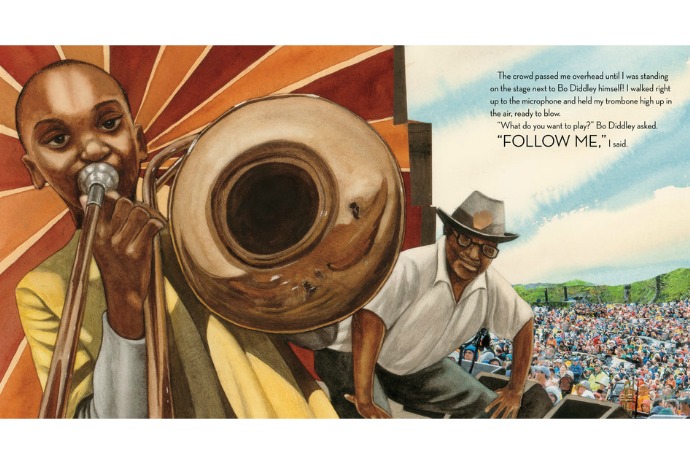 I don’t want to let holidays like Martin Luther King Jr. Day slip by with my kids thinking it’s just an extra day off of school. So if you’re like me and are looking for some ways to honor the spirit of MLK while you’re home today, we highly recommend you check out last week’s winners and honorees of the 2016 Coretta Scott King book awards which we briefly mentioned in our roundup of all the best book lists and award-winners of the past year.

This is a list of winners we share each year because it’s important for us to seek out diverse stories from diverse authors, that aren’t always featured prominently in the windows of bookstores or on the front page of online bookstores. However this isn’t just about diversity; the fantastic writing and illustrations in these books stand up on their own. Plus, they help spark some great conversation with our kids about how people experience life differently across the United States.

We hope they’ll motivate our kids to become passionate about equal rights and dignity for everyone, so we can each play our own part in helping to fulfill Dr. King’s dream.

And with that, here’s a terrific list of books to add to your collection or take out from the library.

CMP is an Amazon affiliate or find these books at your local indie bookshop or visit your community’s library.

The Award for Best Writing
This year’s award for best writing went to Rita Williams-Garcia for her book Gone Crazy in Alabama, a follow-up to her award-winning books One Crazy Summer and P. S., Be Eleven. It’s a fish-out-of-water story about three sisters from Brooklyn who spend their summer in rural Alabama. A fun reads for tweens and older.

Honor Books for Best Writing
This year’s honor books are definitely geared toward older readers. First there’s All American Boys by Jason Reynolds and Brendan, about a racial incident with police shared from two perspectives. The Boy in the Black Suit, also by Jason Reynolds (impressive!) is a love story about a boy working at a funeral home after his mother dies.  Then, there’s the fictionalized story of Malcom X’s youth, told by his daughter Ilyasash Shabazz with Kekla Mangoon, in X: A Novel which has received a lot of praise and notoriety, since its release a year ago.

Related: 4 fantastic books for kids about MLK to help educate kids while you celebrate

Award for Best Illustrated Book
We’re not surprised that the dynamic, wonderfully evocative art by Bryan Collier in Trombone Shorty won him this year’s Coretta Scott King Award for best illustrated book. The story was written by Troy Andrews and details his own life — all 29 years of it so far — in which he worked hard to rise from a young child in the Tremé neighborhood of New Orleans playing the trombone at age four, to the legendary jazz musician he is today. We think kids will love getting to know the story of this contemporary musical idol who’s played with legendary artists like Eric Clapton, Lenny Kravitz, B.B. King, and U2, and even performed at the White House.  The book also includes a selection of Trombone Shorty’s own music, making it that much more fun for kids to read.

Honor Books for Best Illustration
Two honor books were also announced which I can’t wait to read. The first is The Book Itch by Vaunda Micheaux Nelson and R. Gregory Christie, about the 80 year-old National Memorial African Bookstore, which became known as Harlem’s greatest bookstore. It’s been lauded as a wonderful book about the importance of reading and community, themes I know my kids would spark to.

Then there’s one of my own favorite books of the year, Last Stop on Market Street by Matt de la Peña and illustrated by Christian Robinson. The story revolves around a a grandmother and somewhat-reluctant grandson going to serve soup to the homeless, as told in brilliant, poignant prose. A must-read for any child.

The Awards for New Talent
I’ve always liked that the Coretta Scott King award panelists actively seeks to bring new authors into the spotlight. This year, they’ve recognized the new talent of Ronald L. Smith for his haunting book, Hoodoo, set in a world of dark magic in 1930s Alabama. With a story revolving around a twelve-year-old reluctant hero who needs to defend an entire town, it sounds like it will have great appeal for 5th through 7th grade fans of books like Percy Jackson, Harry Potter, or even The Hunger Games.

The list is rounded out with a great educational read for kids: Voice of Freedom: Fannie Lou Hamer, Spirit of the Civil Rights Movement, illustrated by Ekua Holmes and written by Carole Boston Weatherford. It describes the uphill battle of Fannie Lou Hammer, who faced outrageous obstacles in her quest to champion equal voting rights as a woman of color. However she triumphed, even rising to speak at the Democratic National Convention. In my mind, that makes this one more biography that’s important for kids to read as we seek to demonstrate just how much influence Martin Luther King had on the world, one remarkable person at a time.