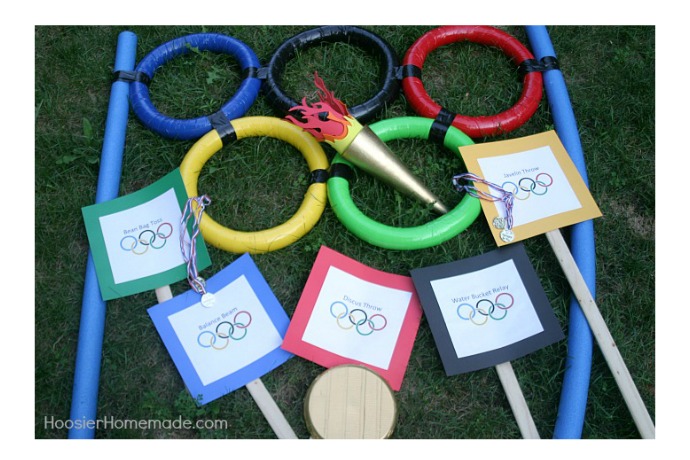 With the Summer Games set to begin on August 5, we are getting ourselves ready to do some Olympic-sized television viewing as we cheer on the amazing athletes from around the world. So if you’re celebrating what is sure to be a spectacular opening ceremonies this weekend, we’ve put together some awesome ideas for throwing your own backyard Olympic games, with Olympic themed activities for all ages.

Related: Throwing an Olympics Party? Some of the coolest printables, snacks, and party ideas.

Bring all of your athletes together with the free printable Olympics party invitations and backyard game signs courtesy of The Dating Divas. They feature several common yard games, like Corn Hole and Bocce, and you’ll also find a blank sign onto which you can write your kids’ own favorite games. They even have brackets if you really want to up the Olympics party competition, plus some cute printable medals for the winners.

Keep the competition going with some of the fun backyard Olympic games we found at 7 on a Shoestring. You’ll find ideas for making colorful hurdles (shown above), a soccer target game, a faux discus distance throw, and even a giant ring toss game. For snacks, she’s got you covered too! Don’t miss her clever golden torches and yummy “gold” medals.

Another cool set of Backyard Olympics games at the Inspired by Family blog includes throwing the discus, doing the high(-ish) jump, and even showing off some gymnastics moves using nothing more than a hula hoop. I particularly love her idea for good sportsmanship Olympic bracelets. And don’t miss the ideas for adorable, edible Olympic medals that look so delicious, they probably won’t make it home with your guests.

We’ve got to award the gold medal to Hoosier Homemade (also at very top) for their five fun Olympic-style games that incorporate those iconic colored rings in such a cool way. Check out this set-up for a javelin toss! I wonder how many Olympians got their start with pool noodles? I mean, outside of the pool, of course.

Related: 10 of the most fun, most creative pool games for kids to play this summer beyond Marco Polo

If the Summer Olympics water events are as popular in your house as they are in ours, recreate some of your own backyard Olympics pool games in your backyard or community pool. Along with swimming races and synchronized swimming,  you have to check out our own Creative Pool Games ideas which includes this hilarious Watermelon Water Polo game that would be fun to play with teens… or even adults.
(photo via Jerry Pennington Photography)

Set up a giant Olympic-sized obstacle course in your backyard like the one shown on Martha Stewart, that conveniently makes use of whatever props you have on hand, and adapts easily to your own space. Consider it your own Olympics Decathlon.

Turn the weekend into a social event and make your backyard Olympics games fun for the whole neighborhood. Invite a few of your favorite families over for a friendly Family Olympics party. Matching t-shirts and props are optional — but totally encouraged. And check out the many all-ages games that party planner Courtney DeFeo offers, that will spark plenty of ideas for a very memorable summer Olympics of your very own.