11 unique gender reveal party ideas that will surprise everyone. Including the parents. 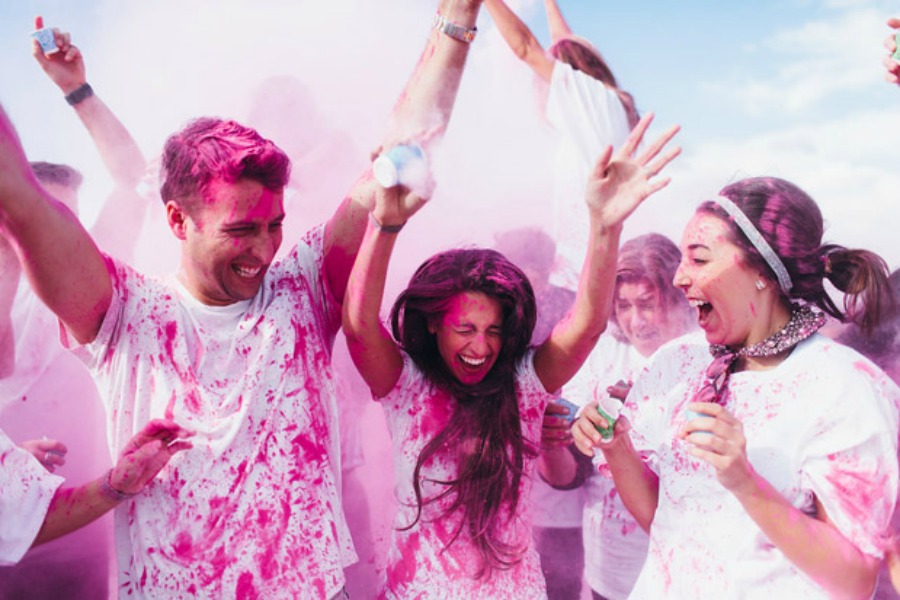 Finding out whether your baby is a girl or a boy is one of life’s greatest surprises — and one of the longest waits, which can be problematic for those of us who need to know things now. (Um, not like we know anyone like that.)

To make the most of the surprise, gender reveal parties have been upping the ante, getting bigger, messier, and more creative by the ultrasound.

So we peeked around the web to share with you some of our very favorite ideas.

(Ed Note: Yes, we know that technically they should be called “sex reveal parties.” Only the baby’s biological sex traits are revealed, not the gender at all. But for the sake of using the common idiom, we’re sticking with gender reveal for now, with the strong acknowledgment that we hope one day, very soon, it changes and we can all be more accurate.)

At top: gender reveal at Grey Likes Baby | photo by Dreamtown
CMP is an rstyle affiliate

I’d say “milk and cookies” will always be a winning party theme where kids are involved. Even if the kids are yet to be. Visit Paige Meyer Photography’s gender reveal party which had cookies everywhere, but the milk came into play when the couple poured colored milk from a sealed jug for the big reveal. Click over to Kara’s Party Ideas to see the rest of the sweet party details.

And hey, if milk and cookies aren’t your thing, I’ll bet you could easily sub in any other kind of beverage. Just make sure that you can color the liquid in two different, easily distinguishable ways.

For this powder-fueled gender reveal party we saw over at Grey Likes Baby (also shown at top), the parents-to-be put together one impressive idea that involved a whole lot of coordination and trust (will your guests really keep their eyes closed until the big reveal?), plus a big wide open space. It’s very cool to read about. And the photographs by Dreamtown are amazing.

Psst… We love this idea so much we looked around some more to learn how to do it and landed on Lovely Indeed, which has a DIY recipe for making your own powder — cool! 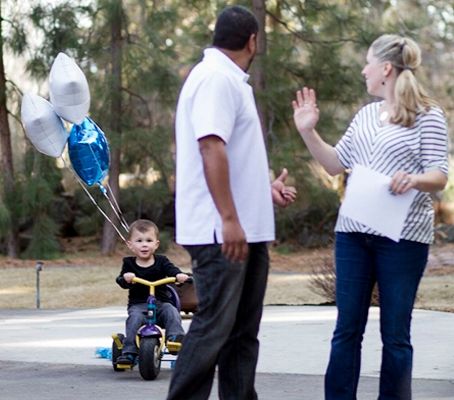 Older siblings can totally be involved with the big reveal, and in this gender reveal party idea by AE Creative, the older sibling is the big reveal. What an awesome way for big brothers or sisters to be the center of the excitement.You have to click through and check out the adorable way it came together.

At other gender reveal parties, parents have let older kids in on the big reveal action with glitter-filled piñatas and balloons in boxes. (More on that below)

For her librarian sister, Louisa from Ice Cream Off Paper Plates threw a wonderful book-themed gender reveal party complete with personalized bookmarks and a banner made from the pages of children’s books — a fabulously clever idea by itself. But one of the smartest touches was the actual reveal, which appeared on the very last page of a custom kids’ book. She has all the ideas on what to do, and just how to make it over on her site. So smart!

The gender reveal party by Macon Photography went the way of water guns — filled not with water, but with shades of blue paint to splatter on the couple. A huge mess, obviously, but such a fun one as everyone gets in on the action. She’s got some great warnings and suggestions on her site, including the kinds of paint you have to use, and the fact that this takes way more time to plan than you might think. Who knew?

Bubbles and Bumps found out the it’s-a-girl news after opening a box that a friend had filled with pink balloons — an idea that scores high on both the “easy” and “surprising” scale.

Our very own new mom Caroline, experienced this firsthand for her own reveal when our associate editor Kate (and clearly an awesome mom friend!) gift-wrapped a cardboard box containing blue balloons. Mostly blue balloons, that is — on top of those was a layer of white balloons with question marks on them, just to prolong the suspense. Sneaky!

Caroline says the box was a fun way to involve older kids too; she had her nieces help with opening the box.

We’d just say not to release them into the sky, because we’d all like our children to grow up on an earth that isn’t littered with latex remnants that can hurt animals and pollute our natural water resources.

The couple behind A Hint of Garlic are so into golf, they designed their entire gender reveal party around the sport. They found out the gender of “Daddy’s little caddy” thanks to a color-filled golf ball their friends had ordered, which exploded into blue dust upon impact. Click over for more info.

(And of course, Daddy’s little caddy could have also been pink. Girls are awesome golfers too!)

But, if golf isn’t your thing, you can find color-explosion baseballs and footballs online too. Who knew this was such a thing?

This isn’t just a cake. This is the cake. Cutting into sugary layers of pink or blue is pretty standard-issue for a lot of gender reveal parties, this amazing gender-reveal confetti cake by none other than Betty Crocker also appeared in our past post about 18 wildly creative gender reveal party ideas.

And if you take a good look at the recipe, it truly doesn’t even seem too difficult to pull off.  Of course I say that with wild optimism.

One of the things we totally love about this confetti balloon gender reveal idea that Brittany at Ever Love Design used for her own gender reveal party is that she made it herself — and shares all the details for how to do it on her site. And although she used cut-up tissue paper to make the confetti, I wonder if you could replace it with something like eco-friendly pink seed paper confetti hearts instead?

I’d say this idea may be best for moms-to-be who won’t be surprised into labor with loud popping sounds. Heh.

In a sea of confetti and paint, these gender reveal cookies by Montreal Confections that we spotted over at Sweet Sugarbelle are so sophisticated and subtle. I know for a fact that making storks out of icing is not in my wheelhouse, but the tutorial demonstrates that putting together the actual color-centered cookies is doable for most of us.

This is also a nice idea if you’re not all about a ton of guests and lots of mess. I can see inviting a few friends and family members over for a tea party and serving these cookies. The surprise is still there…just on a smaller scale.

One of the biggest questions you get asked when you’re pregnant — aside from “Do you know what you’re having?” — is ,”When are you due?” Lulu’s Event Paperie answered both questions in one party that was themed around…clocks!

The expecting mom used a DIY tutorial from Ever Kelly to make a cuckoo clock that would deliver the news right on time (ha). Click over to see even more brilliant themed party ideas, from timepiece cookies to a cute voting station. And I’m especially, ahem, cuckoo for the he/she chocolate bars.