The Beyond Tablet: Is this cool new screen-free gaming system worth the price? 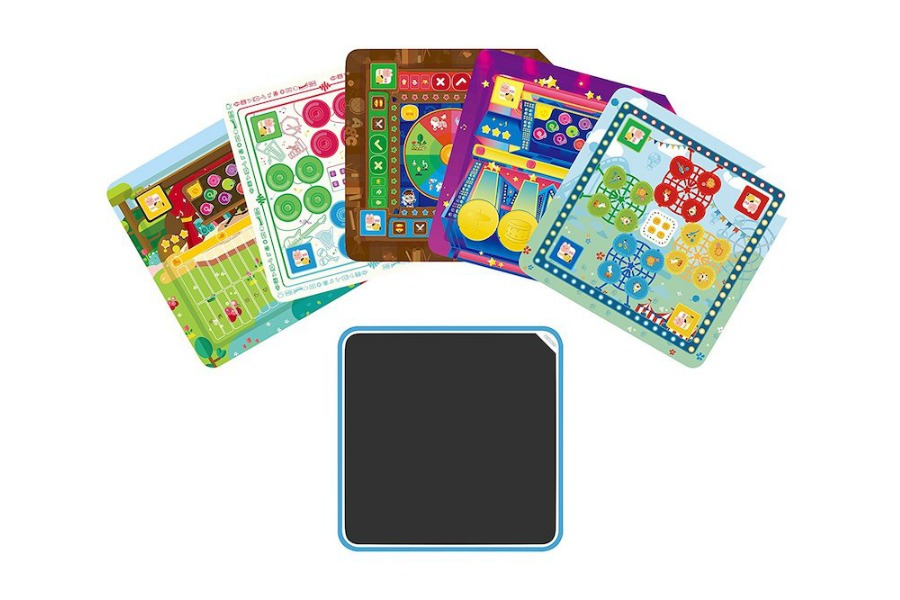 When my kids get bored over the summer, their go-to entertainment, other than the Xbox (of course), is board games. So when we got a chance to try out the new Beyond Tablet — an electronic, but screen-free, tabletop gaming system — in advance of its release, we were excited to see if it held our attention. And to find out whether it’s worth the hefty price tag.

Here are my feelings. TBH, they’re…mixed.

Related: The best family board games of 2016

The Beyond Tablet is a large (17-inches square) electronic smart tablet…with no screen. To play, you plug it in and lay one of the game maps on top, which the smart tablet instantly recognizes. The board comes to life, with voice recordings telling you how to play the game, lights indicating where to place pieces, and so on.

It’s pretty easy to follow…as long as your kids aren’t talking over the directions. My review copy came with no written instructions for the games (and it’s not clear if they’re in the in-store models), so you really do have to listen closely. Other than that, it’s fairly intuitive and we were able to figure it out pretty quickly.

Updated to add: The game system DOES come with a manual explaining the games. Whoo!

What comes with it?

The smart tablet starter set comes with five game maps and pieces for up to 4 players to play at the same time. The games range from variations on the classic Simon game with everyone playing at once — which gets really fun, and tricky — to trivia quiz games and even a musical drum set. (You’re welcome.)

My very competitive kids got quickly frustrated with the trivia game, because you can buzz in to answer before the question is completed. Meltdown ensues. But, the memory games — where we had to tap the right animals or sounds in order — were fun, and challenging enough for my 12-year-old. Especially once it asked us to tap the patterns in reverse. Whoa, hard.

Related: Robot Turtles: The board game that teaches coding. We’re playing on repeat.

You can add to it, and keep things fresh!

What I really like about Beyond Tablet is the “sold separately” games, which have been the most fun for us. I received a copy of Lost Pyramid, a logic game that challenges you to figure out patterns. It started off very easy — a little too easy, I thought — but things escalated quickly. Soon, my kids were having to help me figure out where to place my tiles so we could work as a team to complete the puzzles correctly. (Full confession: I was even tempted to pull it out to play with my husband the other night when the kids were in bed, but Netflix won out.)

There are math games like Funny Fruits, a modern update on Battleship in Battle of Submarines, and a virtual card game called Elemencery. While I’ve only tried Lost Pyramid, I think these look like they’re a lot more engaging and challenging for older kids than the games included with the starter set.

Is it worth the price?

This is an expensive toy with expensive add-on items. It’s more than I’d normally pay for a toy for my kids. I dislike the fact that the tablet is corded, and some of the games were frustrating to my kids.

But, all in all, I’d say, if this is in your budget, buy it. It is a fun, educational, challenging, screen-free diversion that we haven’t gotten tired of. I love that it’s made by an indie, dad-run company with the mission of making families stronger through play. I like that they’re continuing to develop new games, so your investment continues to pay off. And as a neat-freak, I love that the thin game maps mean I can store dozens of games in a small space.

While I’m not sure I would have made room in my budget to purchase the starter set, now that we have it, I’ll definitely be putting the sold-separately games on our Christmas wish lists and birthday lists for grandparents, because my kids do keep going back to it over and over..

And maybe tonight I’ll go ahead and challenge my husband to a round of Lost Pyramid.

The Beyond Tablet smart game board goes on sale June 30, 2017, although you can preorder it now at our affiliate Amazon. After that, look for it at your local toy stores. Thanks, Beyond Tablet, for sending us a sample and some games to try.

🔬🥼🧪 We love science, we are grateful to s