Her Right Foot: Why Dave Eggers has written the perfect picture book for our times 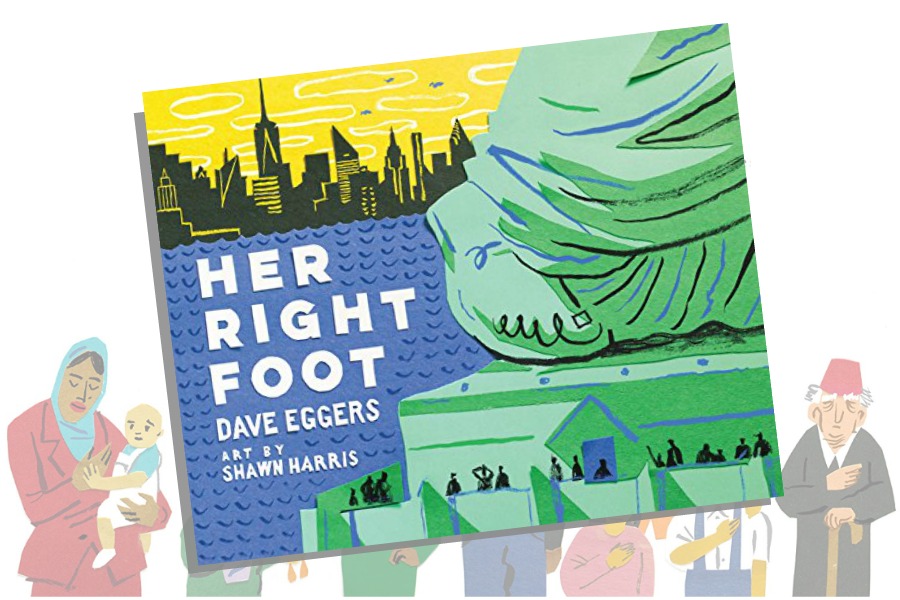 Back when I first discovered Dave Eggers, I never would have thought that he’d turn out to be one of the beloved children’s authors on my kids’ bookshelves. But he’s certainly cemented that honor with the new Her Right Foot, an equally powerful and charming story about the history and meaning of the Statue of Liberty.

In a similar vein as Eggers’ This Bridge Will Not Be Gray which I had described as no dry history lesson, Her Right Foot is more than just some “Let’s learn about the Statue of Liberty!” book.

Related: 9 lovely books about the immigrant experience to help encourage kindness and empathy

Eggers is adept at speaking directly to kids without ever talking down to them, in a way that’s reminiscent of Lemony Snicket. His wonderful, wryly funny voice (her gown would likely result in serious lower back issues) brings to life Lady Liberty’s origins in France, the painstaking construction process, the symbolism the part of the design, even the size of her shoes (Eggers is going with 879).

Plus he reveals details even I didn’t know — like how Thomas Edison once proposed to put a giant record player inside so she might speak. 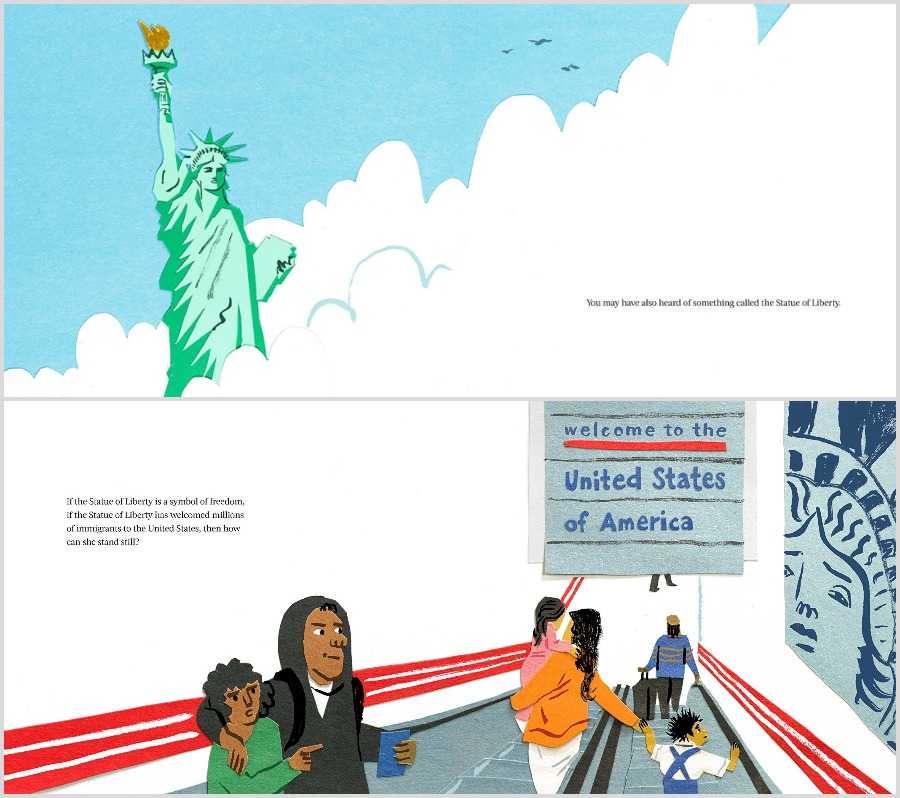 Meanwhile, your kids will be just as captivated by the sophisticated, often humorous cut-paper and ink illustrations of first-time book illustrator Shawn Harris, whose diverse cast of people evoke so much emotion, even in their simplicity.

(Be sure to have your kids keep their eyes open for John Lennon, Don Draper, and a redhead who bears striking resemblance to Broadway’s Annie.)

Related: What does being American mean to you? We love these artists’ answers.

But what’s really makes this book one I’ll be thinking about for a good long time, is the core question the book asks readers to consider (as you might have guessed from the title): Why is Lady Liberty’s right foot, recently unshackled from chains, raised?

Why is she depicted as up and on the move?

Here Eggers presents a beautiful theory about how liberty and freedom from oppression are not things you achieve — or grant — by “standing around like some kind of statue.”

It’s not a message about activism per se — though it can easily be applied that way — but about reaching out to others, connecting, helping when and where it’s needed, and working to achieve the things we care about.

Isn’t that a message we want all of our kids to carry with them?

And this is the part of the book where this mom stops mid-read because she’s crying at the description of all the immigrants from all the countries who have arrived here over the years — including her very own great-grandmother from Kiev whose name is engraved on the American Immigrant Wall of Honor on Ellis Island — and the powerful reminder that the Statue of Liberty, the one icon that best represents the ideals of the United States of America…is an immigrant too.

And it’s also the part where her kids make fun of her. (Not the statue; the mom.)

But yeah, I’m used to that.

I won’t give away the last line of the book, which is the very best part. I’ll just say, you want to own this.

Whether your kids are not yet reading or old enough to be troubled by the recent news about DACA; whether you’re an immigrant yourself or have been here for five or six generations, Her Right Foot is a most perfect book for all of us, at a most perfect time.

Pre-order Her Right Foot by Dave Eggers and Shawn Harris from our affiliate Amazon for a September 19 release date, or look for it at your library or support your local indie bookseller.

There’s been no shortage of “OMG KIDS AND SCRE