A list of excellent articles + analyses to help parents discuss “This is America” with our kids. 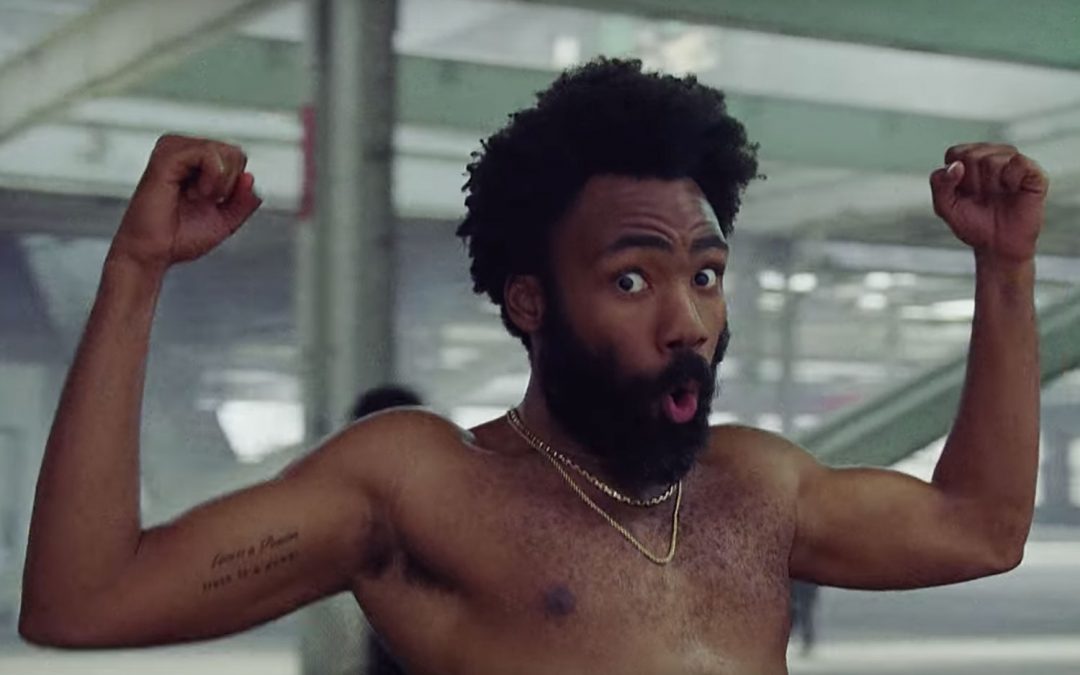 On Saturday night, I saw messages from friends, including our own editors and contributors, pop up on my computer. They all were versions of, “Whoa. WATCH THIS,” with a link to the new Childish Gambino video, “This is America.”

After watching it just once, I was speechless. While I still formulating my thoughts, I was immediately struck with the conclusion that this video was going to be very important. At both emotional and academic levels, Donald Glover and director Hiro Murai’s video is bitingly brilliant, a cultural marker, and a reminder to me as a white woman that I have so much to learn.

As the week has progressed, I’m seeing lots of chatter from other (generally not Black) parents about whether the video is “appropriate” for kids, whether or not they’re sharing it with kids, and if and how to discuss it.

Our editor Liz and I have discussed it, and our feeling is that there’s no reason to keep this from our older kids.

As white parents, we should discuss “This is America” with our tweens and teens, specifically because we are privileged to not to have to have “the talk” with our children about police encounters or topics like African-American stereotypes throughout our history. Also, we recognize that no matter how much we read perspectives from Black writers or listen to People of Color about how they see the world, we can never actually be in their shoes, which means we will always have a lot to learn.

And while we’re learning, so should our children.

Because it’s important that we’re having conversations with our kids about race in America, we’ve put together just some of the excellent essays, Twitter discussions, and other pieces that feature thoughtful, honest, smart analysis about “This is America.” We hope they’ll help you too.

I know they’ve been helping me see so much more in this piece of art than I would have without their guidance, and they’re helping me continue an essential discussion with my kids about what it’s like to be Black in America in 2018.

If you haven’t seen the “This is America” video yet (watch it!) I recommend catching it alone before watching with your kids. There are surprising moments of extreme violence which may be triggering to some adults, let alone younger kids.

After you’ve watched, check out these articles (an admittedly extremely abbreviated list) to help give you some important background info with the goal of being able to discuss Childish Gambino’s “This is America” more thoughtfully with your kids.

Because guaranteed, if they’re not hearing about it from you, they’ll hear about it at school from friends.

Related: The Roots created a Schoolhouse Rock-ish video about slavery. Here’s why every parent should watch.

Childish Gambino’s “This is America” Video: Helpful links, articles, and commentary for parents

First, start by reading the lyrics to “This is America” here. There’s a lot you might miss just from listening.

Read Angel Khalil’s twitter thread which describes references to Jim Crow-era propaganda, glorification of materialism, and modern symbols — like the significance of Glover dancing on Oldsmobile cars. (Just note that he acknowledged an error in his identification of the guitar-playing man, further down thread.) 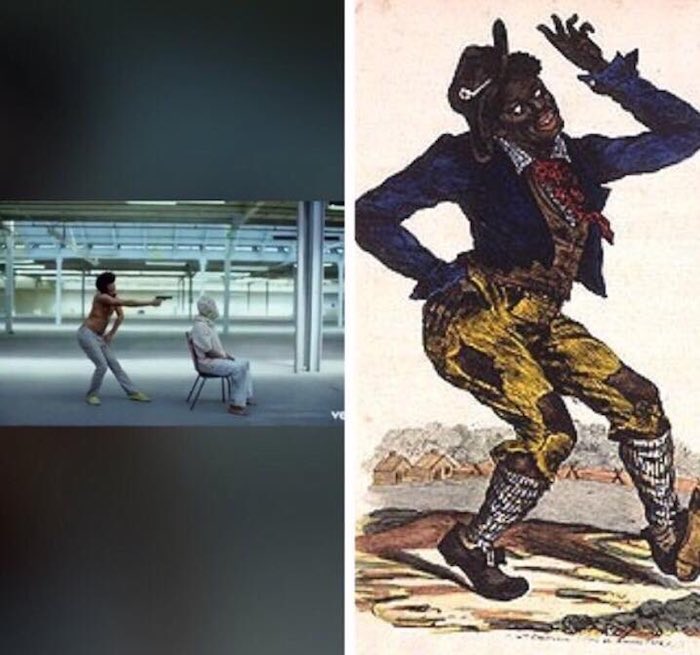 Luvvie Ajayi’s article about “This is America” on Awesomely Luvvie is essential reading. She really breaks the video down piece by piece, summarizing it as “Anything that can touch on Gun violence. Apathy. Generational Gaps. Police Brutality. White Supremacy. Constitutional Unfairness. Evolution of Music. Materialism. Cultural ADD. Unattainable Wealth. in 4 minutes, is a worthwhile study.”

Also follow, her advice on Twitter to watch the entire video, but only focus on the background. I was really moved by the things I missed when I was distracted by Glover’s dancing — which is the point. Don’t miss the comments responding to the thread too, like @HonestTaalib’s observations about the metaphors of the warehouse, prison, and captivity. Wow. 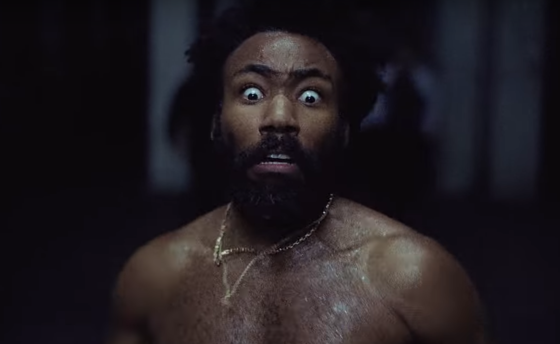 In this interview with Time, U Penn professor of music history, Guthrie Ramsey, talks through the four key moments in the video, including the ending. Ramsey observes that the imagery of a black person running for their life has been a part of American culture since the time of slavery.

Sonia Rao at The Washington Post breaks down the video’s references pretty thoroughly, including her focus on the ending of the video as well, and its connection to Jordan Peele’s 2017 horror movie Get Out — another must-see by the way, on the outside chance you haven’t yet. (I know parents can’t get out much; fortunately it’s streaming now.)

In “How Childish Gambino’s ‘This is America’ Indicts and Challenges Its Audience,” Ira Madison III writes in The Daily Beast about the horror of the black experience, the connections with Kanye West’s recent news-making behavior, and nihilism in “This is America.” This is a fantastic article to read a couple times and think through before you have a talk with your kids, because we’re going to need the next generation to be hopeful, optimistic, and determined to fix these problems.

Speaking of Kanye West, older kids who may be following the Kanye debate might be interested in the outstanding Atlantic article by Ta-Nahesi Coates, “I’m Not Black, I’m Kanye.” It’s been the top trending article on the Atlantic site all week, and can help inspire great critical discussions about the differences in how the two men are presenting themselves (and how, of course, no one person can represent or speak for any race). 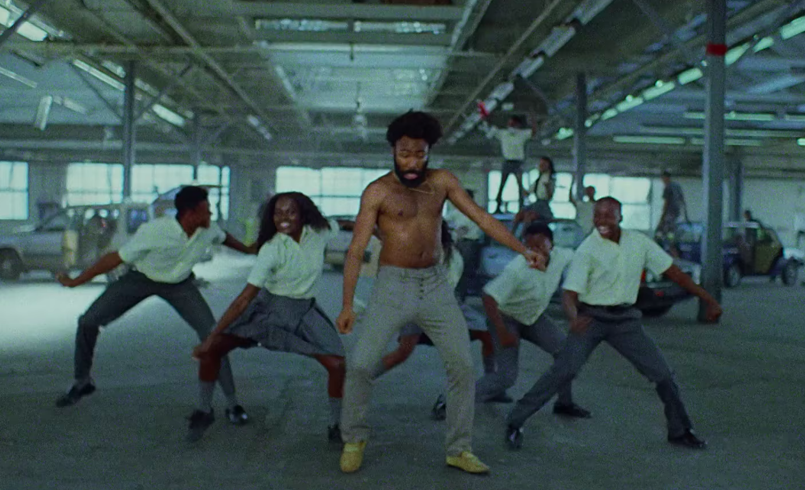 The Atlantic actually has a ton of excellent perspectives including Aida Amoako’s “Why the Dancing Makes ‘This is America’ So Uncomfortable To Watch,” which examines the idea of how it complicates audience empathy and why none of us are passive observers of this video, using examples of other social media and video responses.

Also, be sure to read Spencer Kornhaber’s “Donald Glover is Watching You Watch Him,” which examines audience complicity, and takes on some of the criticism of the video, including sensationalistic violence and why a Black man would depict himself reenacting shootings perpetrated by white men. It’s a good piece to help answer some questions (if not to come to answers) that kids may ask as well.

This article about “This is America” by Emily Mae Czachor at Bustle rounds up a lot of the Twitter conversations happening about this video, making it a good article to bookmark — because it’s going to take time to go through all of the links thoughtfully.

The Doreen St. Félix article about “This is America” at The New Yorker  shares a bit of background on Donald Glover’s career in but also warns about the culture of chaos and the problems with technology. Really important: her observation that we’re already seeing cheery GIFs of Glover’s infectious dance moves which entirely undermine the song’s point. (Or, helps make it for him?) 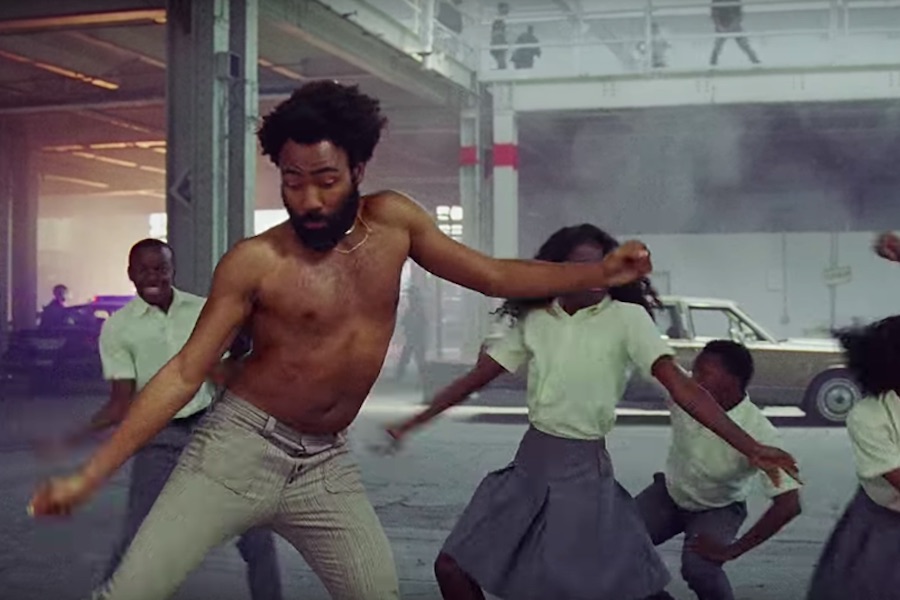 After her initial tweets — and 10 more views — Luvvie Ajayii goes long form and highlights 10 of the symbols we need to be talking about in the “This is America” video. For parents, play close attention to #5. We cannot let our kids become numb to this.

Joshua Adams writes at DJBooth about how the culture that has allowed black joy to go viral is also monetizing black death, and points out that the video leaves us with some unanswered questions — likely deliberately, I believe.

The Guardian’s Ben Beaumont-Thomas summarizes three of the major theories about the “This is America” video, in a quick reads that teens can easily follow. Although, I think following this article with some of the deeper conversations started by some of the articles above is a good choice, because a lot is left out here.

If there are any excellent essays or articles that you loved, please share them here in comments. And if you’re having these talks with your kids, we’d like to hear about that too.

* An ongoing list of the most trusted Coronavirus websites and resources * Expert tips for talking to your kids. Very reassuring! * What to buy beyond toilet paper and canned food * Pantry-stocking tips from someone who's trained her whole life for this * The best ways to clean and disinfect your phones and gadgets * Safety tips for orderinng take-out and delivery right now * 15 awesome podcasts to keep kids engaged * 7 gym alternatives keeping us sane * Homeschooling 101: Tips for newbies * How to create a homeschool schedule that works for you