Pride Month: 5 simple ways to be a good LGBTQ ally 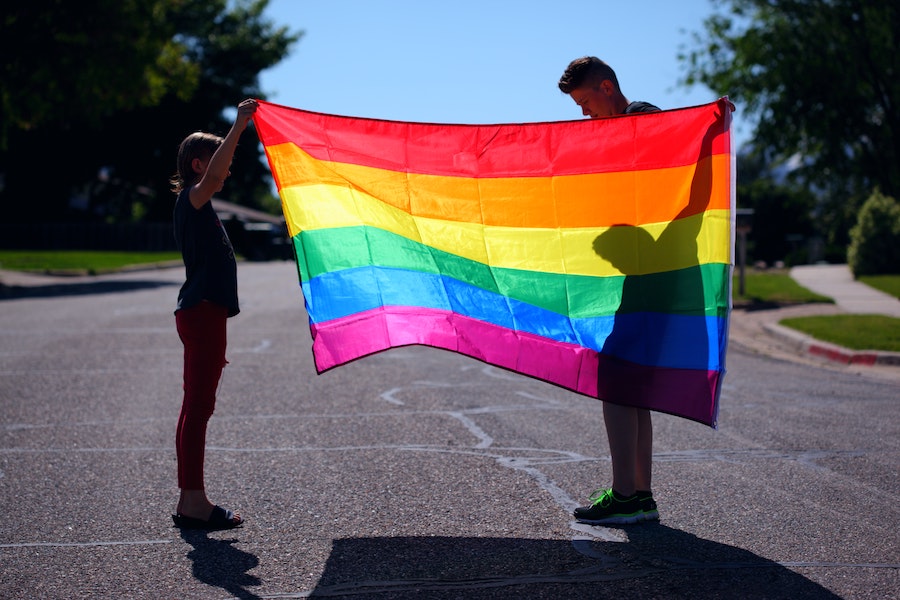 While we’ve shared so many resources for Pride Month over the years, we wanted to write today about ways to be a good LGBTQ ally, whether you’re a parent, friend or family member of someone who is LGBTQ, or whether you just want to step up and be a more compassionate, supportive person overall.

By now you probably know that June is the month commemorating the 1969 Stonewall Riots in Manhattan that kicked off the modern gay rights movement, and Pride Month encourages us to support and celebrate all the unique and beautiful adults and children who make up today’s LGBTQ+ community. And celebrate them we will, but we are also painfully aware that this community remains under attack at the highest levels.

From the censoring of books that feature LGBTQ+ characters, to Florida’s alienating and cruel “Don’t Say Gay” bill, to the many anti-trans bills in Texas (and Arkansas and Tennessee and…) that will have significantly negative impacts on trans youth and adults, it’s all happening. In 2022 no less. And now, there’s a real fear that same sex marriage could be overturned by the Supreme Court.

It’s time for us allies to step up — or for more of us to learn how to be a good LGBTQ ally in the first place.

Keep reading for five ways to be a good ally. They aren’t hard, but may require some self-reflection and a bit of work, but of course, the happiness and well-being of LGBTQ+ people we love in our lives are absolutely worth it.

Photo by Sharon McCutcheon on Unsplash

1. Being a good LGBTQ ally: Do your own research first

As a middle-aged mom, I will admit that I didn’t always know a quick definition for “newer” terms like pansexual or nonbinary. But with the internet at our fingertips, there is absolutely no excuse for not doing a few minutes of research to become more educated and empathetic.

Instead of asking someone to “explain themselves” to you (not good ally behavior), you can go look things up yourself. 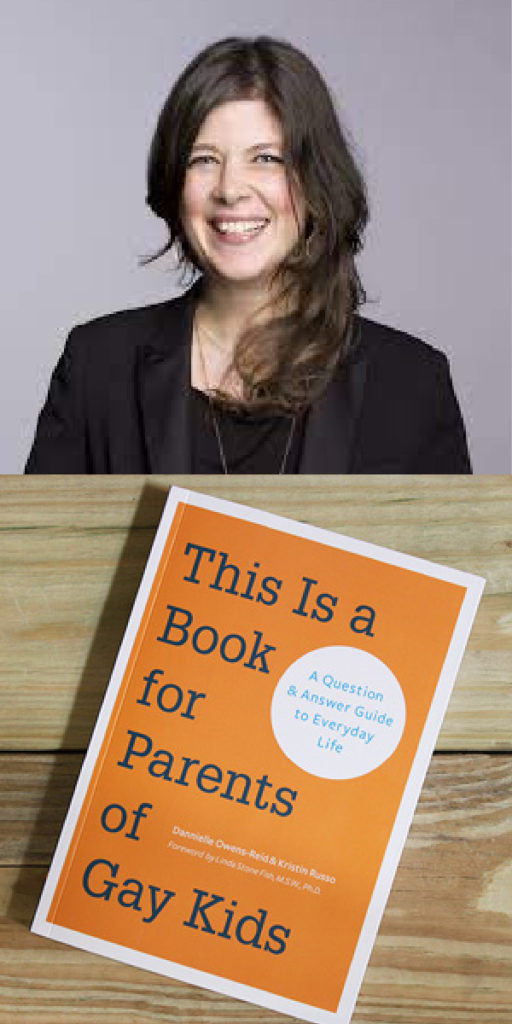 After that, if you’ve done your research and explored a topic as best you can, ask someone knowledgeable who trusts you whether they are willing to answer some remaining questions for you. But please don’t be offended if they are exhausted from being approached and simply don’t feel like being your LGBTQ+ resource for questions.

And whatever you do, please never ask a child to explain themselves. You can help answer their questions, but not the other way around.

As a parent, I have worked really hard to try not to jump in and “solve” every issue my child has, which has been good practice for being an ally. What it’s taught me is that not every conversation requires my input, especially when I am not a part a particular community or group.

This is especially important if your kids are coming out to you or want to talk over their feelings.

Some favorite advice from author Kristin Russo on an episode of Spawned: don’t pepper kids with questions as if you’re an FBI interrogator. Let them know you are willing to talk at any time, then help them find answers to questions or concerns they may have. From there, go back to point #1 and do your own research if you are still curious about their questions or their decisions. 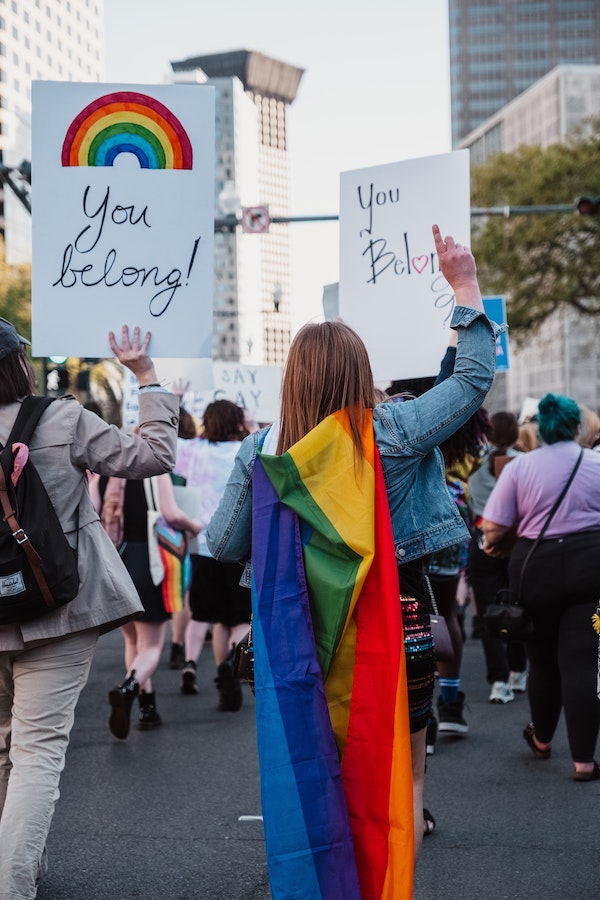 Photo by Aiden Craver on Unsplash

3.Being a good LGBTQ ally: Watch what you say.

Thankfully, many awful slurs from my 70 and 80’s childhood have been (mostly) retired from the modern vernacular, but I’ll occasionally still hear a term that isn’t kind or acceptable by today’s standards. For instance, adding an article (a, an, the) before LGBTQ terms — like saying “the gays” —  is not okay.

There are many other slurs that are still tossed around way too often and may be leftover from your own childhood; it may be something as seemingly benign as “that’s so gay,” or something that’s more pointedly hurtful.

Rule of thumb: If you say something and are corrected for saying it, don’t get defensive! Don’t freak out. Just apologize, move on, and do better next time. As Liz pointed out, when you say, “oh, I’m so sorry I screwed up! I’m such a jerk!” you are now centering the issue on yourself, and actually making things more uncomfortable for the person to whom you are trying to apologize.

And, take note: While people who are LGBTQ+ may identify in ways that help them “reclaim” slurs or insulting words, that does not give the rest of us — including LGBTQ allies — license to use them too.

Of course inclusivity in language goes beyond slurs and insults. It’s important we as a society work on expanding our vocabularies beyond phrases like “mom and dad” (say “parents”), “boyfriend or girlfriend” (say “partner”), and even “pregnant woman” (say “pregnant person” — and read this Atlantic article by Emma Green to help understand the thinking behind that, because I know that’s a hard one.

Overall, a good ally works to be inclusive and not to presume that heteronormative standards (like asking “what do your mommy and daddy do?”) are always at play.

4. Being a good LGBTQ ally: Make your support known publicly.

Though we strongly believe in doing your own research about LGBTQ allyship, being a thoughtful listener, and paying attention to the language you use, that doesn’t mean we want allies to be silent or to linger in the background when it comes to equal rights and social justice.

By all means, get involved and participate in the movement toward equality to show your support!

Drape yourself in rainbows and attend a Pride parade! Buy amazing and supportive pride merchandise like the cool Pride Month products we rounded up last year. Put up a lawn sign or window sign. Put up a bumper sticker.

And hey, use your social media — add your pronouns to your bio and feel free to share memes and articles, which can make it clear you are an ally and will not put up with the bullshit going on across this country. It’s not performative activism if you couple this with other, meaningful actions. And hey, you never know who you might reach; if only a friend who’s struggling with what to say themselves.

Above all, be sure to stick up for LGBTQ+ youth and adults publicly, especially in front of your kids. Being an LGBTQ ally means you don’t hesitate to cut off an ignorant comment or hurtful talk and say “hey — that’s not okay with me.”

5. Being a good LGBTQ ally: Donate. And vote!

Finally, support for our LGBTQ+ family and friends goes beyond rainbows and parades and pronouns.

LGBTQ+ organizations and charities need our financial support so that they can continue to fight legal battles and offer life-saving services for kids and adults. And while we love some of the big organizations like The Trevor Project, PFLAG, The Human Rights Campaign. and GLAAD, don’t forget smaller or niche groups too. There are so many great people serving the Black LGBTQ+ community, AAPI LGBTQ+ groups, or even regional groups like Fiesta, dedicated to supporting San Antonio-area LGBTQ youth.

And, it goes without saying that these next few elections — up and down the ticket — will have massive repercussions for those who are LGBTQ+ as well as those of us who love them. We simply must vote as if their lives depend on it, because they do; the correlation between stigmatization and suicide is real and hit’s horrific.

If you aren’t sure who to vote for in any given race, Human Rights Campaign manages a great list of how elected officials stand on legislation that impacts the LGBTQ+ community. Though as a general rule, candidates who are aligned with the GOP are not going to be an ally when the going gets tough.

You might also consider supporting those businesses that also support LGBTQ+ folks — or at least don’t actively work to hurt them. As our editor Liz always says, “chicken tends to taste a lot better when it’s not served with a side of bigotry.”

For something fun starting today, June 1, google “LGBTQ” and see what comes up.