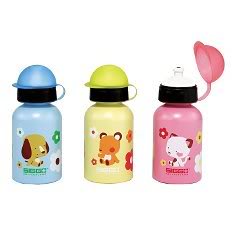 It’s disheartening to support a brand like SIGG for making safer, BPA-free drinking bottles for kids and adults when it turns out that nope, that wasn’t the situation at all. Or as the old saying goes, “we was played.”

News broke this week that SIGG, the aluminum bottles we’ve often lauded as a safer, Bisphenol A-free alternative to plastic cups and bottles–and that my own kids drink out of every day–have linings that contain small amounts of the proven endocrine disrupting chemical.

This is the case with all SIGG bottles made before August 2008, and plenty still being sold.

Before you panic, there is no evidence that the BPA in the liner can leach into the drink – this is the statement the company has always made and continues to make. And we do believe them. My own kids continued to use their SIGG Sippies yesterday and will do so until I can get a replacement.

SIGG’s assertion is that consumer concern has shifted from BPA leaching to any sort of BPA presence (which I’d agree with) and that as that shift occurred, the company worked quickly to address it by creating a new BPA-free “eco liner.” Even so, we’re pretty annoyed that CEO Steve Wasik played on the public’s goodwill, by allowing trusting consumers to believe something they knew not to be true as early as 2006.

I don’t know why he couldn’t just take a page from the old PR playbook and say, SIGG bottles are safe, but we’re making them even safer.

So do your own SIGG bottles contain the old lining? Look inside. If they’re coppery and shiny, then yes. If they’re beige and flat, they’re SIGG’s new eco-liners. Then it’s up to you to decide what to do about it. It would be nice if SIGG would offer a bottle exchange, as TreeHugger suggested, but not holding my breath here.

Read more reasoned takes on the issue from our friends at Z Recommends, TreeHugger, Eco Child’s Play and Inhabitots, and see the letter from the SIGG CEO Steve Wasik which is now prominently linked on the consumer site.

As for bottle alternatives we continue to feel good about, make sure you check out Klean Kanteen [edited to add: and Thermos and Safe Sporter] whose bottles are made from stainless steel, and not aluminum, and don’t require a lining. And whose advocates are currently doing a little happy dance, no doubt. –Liz

What are your thoughts about this? Join the discussion on the Cool Mom Picks Facebook fan page.