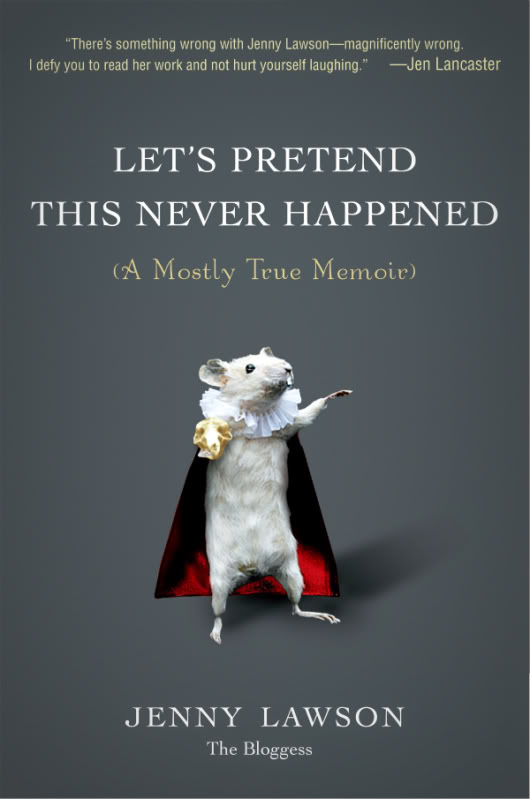 Anyone who’s familiar with the uber popular blog The Bloggess, by Jenny Lawson, won’t be surprised in the least that her new memoir Let’s Pretend this Never Happened (A Mostly True Memoir) is spit-bourbon-out-your-nose funny. You won’t be surprised that this is not a book to read out loud to the nun sitting next to you on the bus. You also might not be surprised that it debuted #1 on the New York Times best-seller list this week.

What might surprise you, however, is how poignant, moving, and absolutely captivating it is from cover to cover.

From the first page you know this is not your ordinary memoir. It’s
loaded with hilarious stream-of-consciousness asides, rambly chapter prefaces,
and “footnotes” in response to notes from Jenny’s editors. (“My agent
and editor don’t love this chapter because it’s about me doing drugs
(poorly)…but I pointed out that druggies will totally relate to it and
nondruggies will feel smugly self-satisfied with their life choices
when they read it so I’m basically hitting all the demographics.”)
But while those paragraphs keep you laughing, it’s really the compelling
trainwreck narrative of her life that will keep you reading.

Jenny’s
father was an eccentric Texan Taxidermist who would regularly stick his
hand in dead animals and make them talk as if they were puppets; and her
mother was not only complicit, she made 80s style Jams for said dead
animals. Other stories of Jenny’s early years in small town West Texas
are so bizarre–swimming in an open-air cistern meant for pigs,
artificially inseminating cows–you may have trouble believing that
they’re true. Knowing Jenny personally, yes, they’re true. But knowing
Jenny personally, they’re also mostly true. (Thus, the title of the
book.)

Interestingly, the manic pace of the early chapters
slowly gives way to a beautifully told (and okay, still pretty weird)
story about her unusual courtship with her husband, a mismatched stint in HR for a religious organization, her painful journey
to becoming a mother, the evolution of her marriage, and battles with
anorexia, anxiety, and afflictions real and imagined.

I think
what makes this book so special, however, is that even a woman with
pretty much the most unrelatable life ever, makes her life absolutely,
completely relatable.

While Jenny’s voice is most distinctly her own, in a way, Let’s Pretend may remind you of two of my favorite humorists, David Sedaris or Augusten
Burroughs, only with more cursing. Even Burroughs wrote about the
book, “Even when I was funny, I wasn’t this funny.”

Huge caveat: If you are not a fan of the F-word, the S-word, the GD-word, or
pretty much any word starting with any letter when it’s in the hands of Jenny
Lawson, by all means, stop reading this review instantly and slowly step away
from the Amazon link.

If you are a fan of the F-word but your kids are not, then consider
reading the book between the covers of a Better Homes + Gardens,
considering the first blurb on the back cover reads “F*cked up in the best possible way. Adorably offensive.” -Jesus

Let’s Pretend is without question the funniest book of the year. It might even be the
funniest book of any year, but I’m not ready to make that statement
until I read the sequel.

In fact, if the second one is not out soon, I think Jenny’s going to have a few hundred thousand angry fans to answer to. Some wielding taxidermy. –Liz

Find Let’s Pretend this Never Happened: A Mostly True Memoir by Jenny Lawson online from our affiliate Amazon or at your local indie book store. You can read her blog for free at TheBloggess.com. Either way, make sure you have some extra mascara on hand.