Circus Smirkus – the must see kids tour of the summer 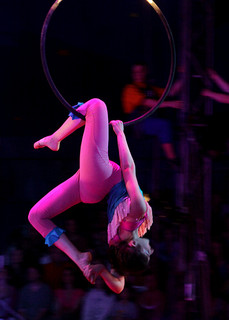 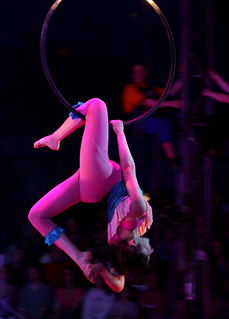 Last year for the first time, I discovered the genius that is Circus Smirkus, and I’m not exaggerating when I say that my kids have been counting the days for an entire year until we could return. Well, we did. And you can too, now that they’re on tour again for their 25th annual summer (wow).

There’s a whole lot of great reasons to nab your family some tickets for this special show this year.

The non-profit Circus Smirkus is everything kids inherently love about the circus–acrobatics, humor, clowning, aerial stunts, hula hoops–only
all performed by a cast of unbelievably talented children, ages 8-18. My
friends called it “Cirque du Soleil Junior” and I’d say that’s about
right; in fact, as in my Circus Smirkus review last year, I suggested some of these kids will go onto that level of success, and indeed some of them already have.

It’s
the kind of thing that sounds a little strange–an amateur
circus? With kids? But trust me, this is no high school production of
Guys and Dolls (says the former 15 year-old Hot Box Girl) which accounts for its cult following. It’s wildly professional. Plus the small big top, the length and pacing, and the
ability for kids to sit on the ground right up at the ring makes the scope just perfect for the kids 3-10 who joined us last night. 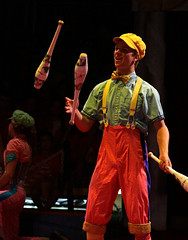 The
theme this year is time travel, which leads to some clever thematic
segments: a genius Anthony/Cleopatra acrobatic and
contortionist routine; some wonderful clowning between a Victorian dandy
and a George Washington in red noses; a cowboy “showdown” with diablo
spinners instead of pistols; and a show-stealing soloist “astronaut,”
whose gravity-defying aerial silk stunts were made for this Neil
Armstrong homage, complete with Space Oddity-esque mission control SFX.

Plus hey–no creepy animal acts with questionable weirdness around the treatment of lions and elephants.

My
kids were also happy to see the return of clowns like Chase Culp and
Magnus Giaver, both 17. (Pretty amazing that they now have their own
Smirkus “celebs” after just one year. Take that, Bieber!)

If you’re already a fan, you’ll devour the beautifully produced new book, Circus Smirkus: 25 Years of Running Home to the Circus by Rob Gurwitt and Smirkus founder Rob Mermin, which will pretty much lock your kids’ insistence on going to their summer camp next year.

Also, it enlightened me as to the reason for the name of the organization. It’s a derivative of the Yiddish, Circus? Schmirkus. As in, Go get yourself a real job! Ha. 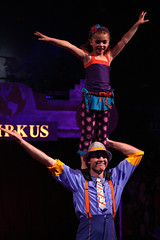 Does
the concept of your kids riding unicycles and swinging through the air make your palms sweat? Me too. But you know, kids are
pretty darn capable if you allow them to be. When I asked Rob Gurwitt,
whose children both perform in the show, how it feels to watch his 18
year-old daughter dangling 25 feet above the bigtop floor in a poodle
skirt, by a single leg hooked around a bar, he said without missing a beat, “amazing. I know
how hard she’s worked to get here and how professional and committed to
safety they all are.”

In an age of helicopter parenting, I have to respect that big time.

Also, I thank him and the other parents and grandparents who support this show for allowing their kids to pursue their dreams. It gives my own kids the chance to explore theirs as well. If only with the “hula hoop show” we’ll no doubt be treated to this evening. –Liz

The 2012 Circus Smirkus Tour runs now through August 19 around Vermont, Maine, Massachusetts, Rhode Island and Upstate New York. And grab Circus Smirkus: 25 Years of Running Home to the Circus through their website