Grammar police: Your mugs are here. 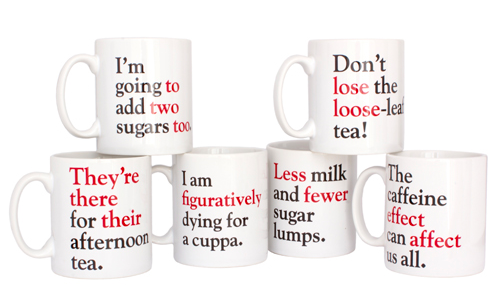 We all have our pet peeves, and one of mine happens to be spelling and grammar. Even a text message with they’re/there/their used incorrectly is enough to make me cringe. (To say nothing of all the pitches we receive daily that assure us “mom’s will love this!”) That’s why this set of mugs would be perfect for starting every grammatically-correct day.

I love how the Grammar Grumbles mugs from The Literary Gift Company illustrate the proper use of two/to/too and clarify that no one will actually die if they don’t get what they’re yearning for. (It’s a figure of speech, hence “figuratively.” Get it?) Succinct, educational, and hilarious too, in the same vein as the Grammar Rules dishes we recently found.

Even if you don’t take grammar as seriously as I do, I still think these mugs are great reminders of the rules. They might even make you think twice about whether to use less or fewer when you’re writing that email to your boss.

How cool–a mug that delivers caffeine and might save you from an embarrassing grammatical blunder. I’m sold.

Get the set of six Grammar Grumbles mugs at The Literary Gift Company.