Dan Zanes new web series gives parents one more thing on YouTube for kids that we’re not terrified of. 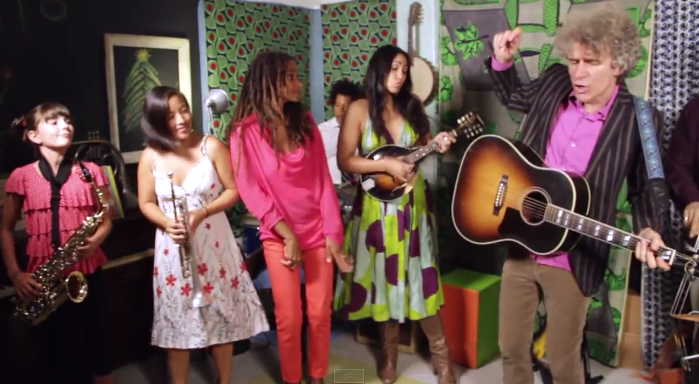 For the past 14 years, the likable, talented, and crazy-haired Dan Zanes has been putting out some of the very best family music with albums like House Party, Catch that Train, Little Nut Tree, and, most recently, Turn Turn Turn with Elizabeth Mitchell. But his latest venture brings the magic to life through video at a new home on YouTube with the Dan Zanes and Friends web series that lets fans (young and uh, formerly young) enjoy this prolific performer in a whole new way.

Dan Zanes and Friends is a series of nicely produced and edited videos, each about 9-10 minutes long, which follow the adventures of two young Brooklyn kids named Brandon and Lola. Brandon’s mom, played by artist Sylvia Maier, becomes Dan’s tour manager which sets the plot rolling, letting the kids meet the band and eventually play with them.

This isn’t some madcap adventure story where Dan gets lost in the city and the kids need to find him before he misses his big show. (Cue wacky sound effects!) The episodes stay true to their tagline which references no plot and no drama. Each episode instead has a gentle, slice-of-life pace, as if you are that fly on the wall who just happens to have landed in Brandon’s apartment.

It actually feels–in a good way–a little like an extended docu-style Sesame Street video, although the kids are visiting a local jam session in Brownstone Brooklyn, as opposed to a dairy farm.

The two young performers are very likeable and authentic, if their scripted performances are a little big, but everything comes together nicely by the time the music starts; each episode includes a rousing tune led by Dan Zanes, usually along with some bandmates and the rest of the cast. And wow, those kids are playing their own instruments, with Lola rocking the sax and Brandon killing it on piano.

Kids may love that part best.

The actors definitely grow into their roles and become more comfortable with each other over the course of the first three episodes and you’ll see the difference. By the third episode, the show finds its mojo and I feel less like we’re watching a show and more like we’re peeking in on the lives of working musicians.

So yes, I’m definitely looking forward to the next one.

These videos are such fun, impromptu sing-alongs, they’ll make you wish you were neighbors with Dan Zanes and his friends. In fact, don’t be surprised if you find yourself joining in too.

Catch the first three episodes of the new Dan Zanes and Friends web series on YouTube. Hit the “subscribe” button under the video screen to be notified of future episodes.