When to replace makeup? An easy, common sense, non-alarmist guide 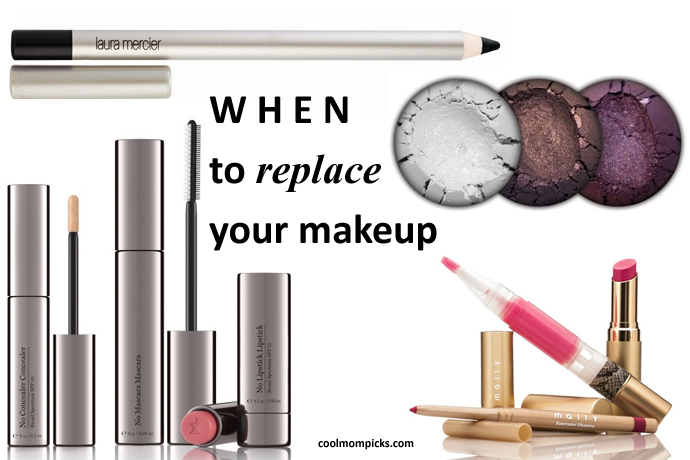 One of the biggest questions we see around the web is when to replace makeup. And I totally get it. I have a drawer full of makeup–like that cool auburn eyeliner that I might wear some day, or a pale pink lip gloss that was awesome over the summer and not so much for the fall. But the thing about makeup, unlike, say, a pair of skinny jeans you’re aiming to fit into, is that it does have an expiration date.

Some products last a really long time and others not so much, so we’ve put together this  “when to toss your makeup” cheat sheet. The thing is, we’re not the beauty experts who want to tell you that you have to replace your stuff every week or oh no terrible things will happen! We’ve got a slightly more realistic point of view, as women (probably like you) who don’t want to spend a fortune replacing our favorite cosmetics before it’s time. We hope this guide helps.

When to Replace Mascara

I know it sucks to throw out a seemingly perfect tube of mascara, but while the cosmetics companies will tell you an open tube should be tossed after about three months, we are going to give it six months, which is when bacteria can begin to form inside. And yes, we know that totally sucks when it’s something you might have spent some good money on. However mascara is more susceptible to bacteria growth than a lot of cosmetics, both because it’s a liquid and because you’re dipping the wand in the tube and then pulling it out to apply and putting it back in again. So if you’re going to be most prudent with any of your cosmetics, this would be the one.

The reality is that I’ve ever gotten an eye infection from older mascara, but there are plenty of anecdotes floating around. The longest I’ve personally gone with one tube is about six months, at which point it starts to get crumbly and cakey anyway — two clear signs that it’s time to retire it. (Although some of our staff admit to keeping theirs nine months to a year without any problems.)

Also, consider the short shelf life of mascara a good reason to splurge on other kinds of beauty products besides this one.


When to Replace Eye Liner

Pencils trump liquid eye liners in this case. Liquid eyeliner is pretty much in the same boat as mascara, with a recommended max of six months use because of the formulation. If you don’t use it frequently, you can probably go longer.  However an eye pencil can last up to two years as long as you’re using a sharpener that you’ve sanitized with alcohol. (Sorry, you can’t just keep it at the bottom of your makeup bag and forget about it for a year.)

And of course if you’ve had an eye infection of any sort, you’ll want to get rid of all of your eye makeup products immediately.  But I would suggest you avoid keeping those little eye pencil stubs around “just in case” – though we know, we’ve done it too.

When to Replace Lipstick

When cared for properly (i.e. not letting my daughter borrow it and put it all over her face for clown makeup), lipstick can actually last anywhere for a year up to four years, according to some experts. We’d like to lean towards the longer end of the spectrum, considering great lipstick doesn’t come cheap anymore. It also explains The Lipstick Effect – a proven decades-long correlation between a down economy and higher lipstick sales. It’s a small investment that can make you feel great for a long time. The best way to know if your lipstick is ready for tossing, is that it starts to change texture, color or smell. Lipstick is pretty good at letting you know when it’s ready for retirement.

As for the new lip pencil style lipsticks and glosses, they can often last longer as with eye pencils, if you keep them clean, covered, and sharpened with a sanitized sharpener.

When to Replace Lip Gloss

Tossing your gloss is a good idea after about six months but we find we can go a year, should last year’s hot summer color still look awesome 12 months later.  It’s that whole liquid thing again–solids do a better job of staying bacteria-free, plus glosses require that double-dipping thing.

Regardless of the formulation, toss out all lip products if you come down with a cold sore, or if you notice that it feels extra sticky. In which case you probably wouldn’t want to use it anyway.

When to Replace Foundation

Liquid foundation is typically good for up to one year if you take care of it properly. And considering how much a good foundation can cost you, it’s worth it to take extra measures, such as storing it in a cool, dry place (hint: not the bathroom or your glove compartment) and using clean applicators to apply. If you notice any discoloration or separation in your foundation, just throw it away. There is even a scary risk of the strep bacteria forming in liquid foundations, but there’s no bad bacteria you really want to introduce to your sensitive facial skin if you don’t have to.

One smart suggestion is to stick with smaller containers so there’s less to potentially waste. While there are some super-sized liquid foundations from companies like Mac, those are best for the pros who are using it all day long. Besides, you’ll probably be switching out shades from fall to spring, and maybe even going with a tinted moisturizer during the warm months when you need less coverage.

When to Replace Nail Polish

Nail polish is one of the easiest of all the cosmetics to figure out when it comes to expiration dates, because it will show you loud and clear. The color starts to separate, and you can see that right through the bottle. Plus the formula becomes more cakey or sticky and you find yourself cursing at it when it globs all over your cuticles. If you shake it and it still looks questionable, go with your gut and toss it. You’ve probably got a good year or two with each bottle, but by that time, new colors will be piquing your interest anyway.

If you’re using natural nail polishes, especially for your kids, they are likely to go bad sooner because of the lack of preservatives. But if your kids are nail-polish obsessed like ours, one small bottle will not last that long anyway.

When to Replace Blush and Other Face Powders

Powder beauty products are the least likely to develop any yucky bacteria issues (hooray!) because water-free formulas are not the best environment for bacteria to thrive. If you clean your makeup brushes regularly, all powder products–blush, bronzer, loose powder, eye shadow, powder foundation–can last up to two years. Though we have to admit, a few of us have been known to keep some longer without any major problems. It’s just so hard to fall in love with that sparkly plum eyeshadow that you just know you’ll wear more–one day. Even if you haven’t yet. However if your skin is more sensitive and you’re more prone to breakouts, by all means err on the side of prudence and stick with a year or two.

A little cheat sheet for you:

For more make-up tips, including some of the best beauty time-savers for busy mornings, check out our archives.

Also visit our Looking Good Pinterest Board filled with lots of cool tips and products.