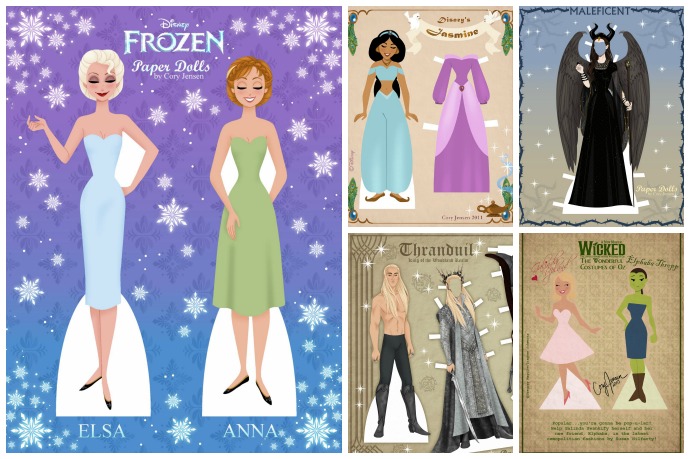 Several years ago, my youngest daughter fell in love with paper dolls, so I scoured the Internet for tons of free printable paper dolls for her, then shared my favorite ones with you all. Well now she’s gone through them all–multiple times. She’s insatiable, I tell you. In looking for more for her, I found the most remarkable artist in Cory Jensen and I am officially obsessed.

Also known as Cor104 on Deviant Art where I originally found him, Cory is seriously a master of illustration. I adore his style so much, and his clear devotion to the fan art he creates. The fact that he’s made so many (many, many) paper dolls free for download makes me want to recommend him for every paid illustration job I can find, to support him right back.

First off, he’s got all the characters a Disney-crazed kid could ask for, starting with Frozen paper dolls along with plenty of outfits for them. He also makes them in a cuter “little kid” style if that’s more for you.

But if you’re over Frozen (you’ve let it go? Ha.) don’t worry–he’s got all your princess covered.

I also love Cory’s Disney villain series (how can you have awesome imaginative paper doll play without the bad guy?) including Cruella De Vil and Malificent. And yes, there’s Hans.

But…there’s more. Ready to get out of Disney Land?

Check out this collection of Les Miserables paper dolls that, of all things, my girls were begging to download first. I always love paper dolls in period costume so the early 19th century French wardrobe is fantastic.

Honey Lemon from Big Hero 6 is here, and I can’t wait for him to work up the rest of the characters, having finally seen the movie myself this week. Baymax wouldn’t have a whole lot of wardrobe choices, though the armor wings would suffice.

I was pleasantly surprised find a Lord of the Rings paper doll featuring Thranduil amidst all the animated characters. It’s just him so far, but wow, the possibilities here are amazing. (Think of all the shoes for the hobbits!) Yay for paper dolls for fans of sci-fi fantasy.

Cory also has a thing for Broadway with paper doll tributes to Funny Girl, Hairspray, and My Fair Lady. But it’s these Wicked paper dolls, featuring quite a few costumes for Galinda and Elphaba, that my girls would most gravitate to. Even Kristin Chenowith gave him a shoutout on Twitter for these beauties which makes me like her even more.

And then, just in time for Valentine’s Day — how could I resist the Queen of Hearts paper dolls. The biggest question is going to be, where to start? Because my daughters are sitting over my shoulder right now, “calling” who gets which one first. Wish me luck.

Find tons of free printable paper dolls of Disney characters and much more on the Cory Jensen tumblr, or at Paper Dolls by Cory Jensen on Facebook. Is it too much to ask for some Princess Bride dolls, Cory? Just a gentle suggestion.