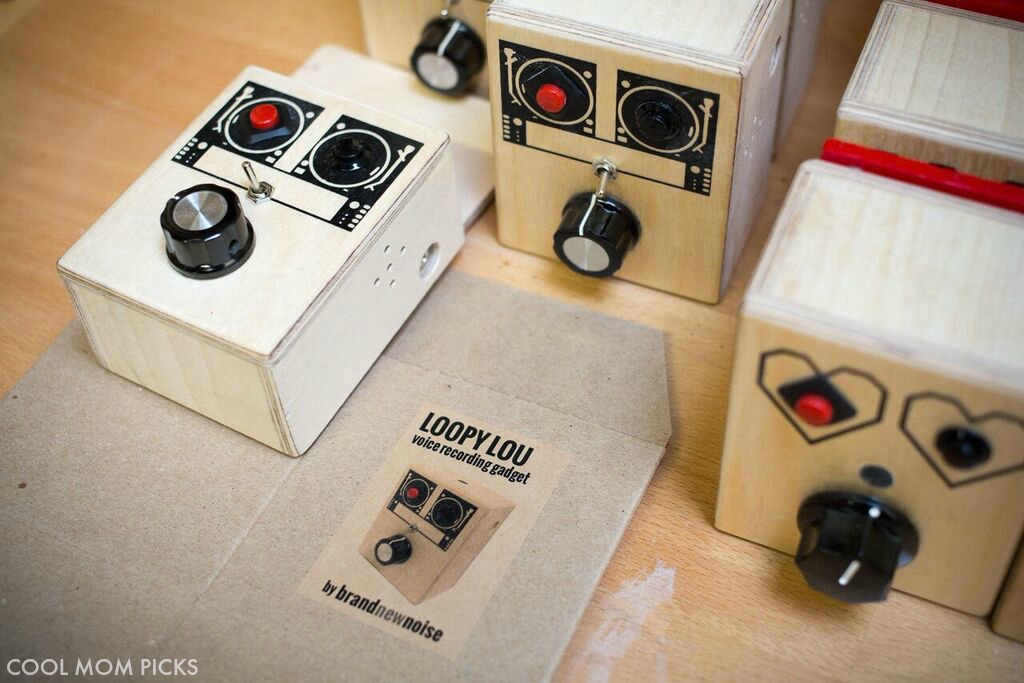 My kids were in a museum gift shop with friends this summer and of everything in the store, all four spent the entire time fighting over (I mean, taking turns with) what’s best defined as a handmade voice  or music recording gadget from a cool little Brooklyn company called Brand New Noise. And while you might have seen something like their nifty sound boxes, nothing tops the original, which is why we’re happy to include them in our series on original makers, thinkers, and artists.

These recording toys are like the best of tech toys meets the best of low-tech toys, and they are awesome.

Essentially, Richard Upchurch built his first basic recording gadget for his nephew with the adorable, appealing look of a face, complete with a red record button and black playback button for eyes, and a pitch control knob for a mouth. It was such a hit, Richard started building and selling more, eventually growing the collection with new variations that were in part inspired by cool stories of how his customers were using them.

While I love his basic models like the affordable Nob Nob, there are so other neat options if you’re willing to spend a little more. Like the Lil’ MIB (below) with a little red mailbox-style flag you can raise to let someone know there’s a voice message message waiting for them when they get home. Sweet gift, right?

Also, way cooler way to communicate than sending a text message or scribbling a note on the back of an ATM receipt.

There’s now a Shaka-Kahn percussion recording gadget that comes with little vials you can fill with candy, beans, change — whatever will let kids experiment with percussive sounds, record then modulate the sound. There’s Zoots — my kids adored this one! — which is a thumb piano meets recording device. And then my youngest daughter’s favorite, hands down, is Mr Purple, which has a purple mustache. Because, come on! Purple mustache!

Richard was so kind to invite my girls to his Red Hook studio to get a look at how his boxes are made. And now, I think he’s got a couple of future interns on his hands.

Because kids today are naturally inquisitive about how things work, Richard recently devised a DIY Brand New Noise looper kit which makes a super holiday gift. It’s perfect for tweens and teens who want to put those STEM inclinations to work and build their own recording gadgets, like my kids did.

Just add a hot glue gun and a screwdriver. Maybe some markers or paints so your kids can really make theirs their own.

There are even signed special edition recording gadgets like one hand signed by Patrick Carney of The Black Keys to support their favorite hometown Akron charity. In fact, The Black Keys have actually used the Brand New Noise recording machines on their albums which, wow. Awesome.

And then, there’s 8 Bit Santa.

I love how committed Richard is to promoting creativity through music and sound, to sustainability, to old-fashioned solid manufacturing practices, and to making customers happy. He even gladly sends out replacement parts, should your kid ever get a little too…passionate with one of the knobs, for example. He’s also truly invested in the community, providing internships to NYC inner-city high school kids, and staying in his Red Hook studio to help the neighborhood rejuvenate, even after his building was flooded with more than 6 feet of water after Hurricane Sandy.

In other words, he’s just the kind of maker I’m so thrilled to be able to support.

Just know that these are not $14 toys; when something is totally handmade in the US from sustainable materials, it’s going to cost more. Which is why they tend to be in higher end boutiques and museum shops.

However I’ve spoken to parents who are fans of the brand, and it surprises me how widespread the popularity is. What they really love is seeing how the boxes can get kids as young as three creative with sound and excited about experimentation. They’re just that simple to use.

In fact, for any of the boxes, all you need are 2 AAA batteries, and a kid who’s ready to play around with something that doesn’t plug in, use WiFi, or connect to a server. I know I’m ready.

Visit the Brand New Noise website or the Brand New Noise Etsy shop for some really cool gifts for kids, adults, or the music lover who has everything. They all ship in 24 hours! And thanks so much to Richard for opening his workshop to us and just being an cool guy all around. Y