A look at the brand new curvy Barbie: Will you buy her? | Thinking: Parent 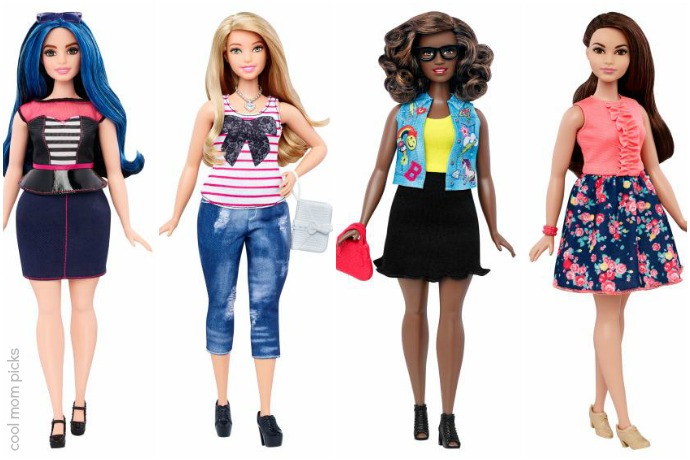 Well, after oh, only sixty years or so of women complaining about Barbie’s unrealistic figure, Mattel has decided to get with the 21st century zeitgeist and the changing look of the world, today releasing Barbies with three brand new body shapes — curvy, tall and petite.

And you know, looking at them? They actually are curvy, tall and petite. Yes!

Interestingly, they’re called the Barbie Fashionista line, which I suppose is a smart marketing move as opposed to calling them something like Barbie Body Shape. Or Bootylicious Barbie which I imagine was off the table immediately.

Of course we had to have a chat about it right away on the Spawned podcast, Episode 31: The buzz about the big Barbie Makeover.

You can also listen to Spawned right on iTunes. And see below for other links mentioned on the episode!

I do still wish that fashion weren’t promoted as her main appeal — especially after last year’s terrific Imagine the Possibilities commercial, which points out how imaginative play with Barbie inspires girls’ dreams from veterinarian to soccer coach. Still, I forgive them for sticking with their core benefit — you can brush her hair, undress her everywhere, as Aqua so perfectly put it in 1997.

The one issue I have to point out however, as Kristen smartly put it: they’re curvy, tall and petite compared with the traditional Barbie. In real life, I might call Curvy Barbie, Regular Barbie, seeing as how she now actually looks like an actual regular person and not a lollipop in a jumpsuit.

Actually, I think if you put them side-by-side, the original Barbie now looks a little sickly compared with her new sisters. Not surprising if you do the math on Barbie’s actual measurements and how they translate to real life.

Also, I confess I find it a little odd that there are no tall or petite Barbies who are also curvy. Not all tall girls wear a size 2-long! But you know. Baby steps.

That said, this is an amazing step for those who seek to get body-shaming out of our collective consciousness — and that means we need to also be sure not to put down the size 2-long women out there too.

All women are “real women.”

And I must say, huge kudos to Mattel for going with the adjective curvy, which could help the next generation of girls better embrace their boobs and hips and bellies and other shapely feminine body parts. In fact, I’ve always appreciated the term opposed to alternatives like chunky, top-heavy, pear-shaped, or zaftig (ask your favorite Jewish grandmother about that one) that I always heard growing up.

I am also happy to also see the line includes different face shapes, eye colors, 7 different skin tones, and new hair color and styles. Even if, in the Dreamworks style of aspirational female depictions, none of these dolls actually seem to have noses.

You may also notice Barbie is now wearing less makeup than ever before, and as a minor detail — though one my eagle-eyed 8-year-old would catch right away — the ankles are articulated, allowing Barbie to now wear flats like so many of us on-the-go, taxi-chasing, comfort-valuing, cobblestone-fearing, but still fashionable women.

However what I think is most important about the new curvy Barbie in particular, is that years after so many of us became horrified watching the original Clark Doll Test (I’m sure you’ve seen various videos floating around the internet that duplicate the experiment) in which young children of color pointed toward black dolls as “less pretty” or even “bad,” is that if this is successful, more kids are going to grow up with the opportunity to have dolls that look like them, their moms, and other women in their lives.

That’s more opportunity to see all kinds of women, of all races and body types, as “pretty” or “good” or especially, “capable” and “inspiring.”

This kind of new product from a major toy manufacturer can have marked effects on girls’ self-esteem — and as much as we may not want to give a single item of Chinese-made molded plastic with hair and clothes that much power, it’s true. And it’s not that I don’t think there are some other issues with some of the Barbie collection, but this is a fantastic step worth applauding.

Of course I’m waiting to see if there’s Muffin Top Barbie or Middle-Aged Wiggly Tricep Barbie coming out any time soon. I’m just saying, I’d love to see one that looks like me, too.

Visit Mattel to see the new Curvy Barbie, Tall Barbie and Petite Barbie dolls in the Fashionista line. A very few are available now, some are on pre-order, with the rest coming soon.

Other Links from Spawned Episode 31

Fascinating opinions of all kinds about Curvy Barbie on the Cool Mom Picks Facebook page and Liz’s own Facebook page.

(And hey, we predicted “some dude” would jump in on the discussion and crap all over the idea, so thanks to the guy who made us right! )

Stacie’s snow ice cream recipe and the article that talks about its “dangers.” Or maybe suburban snow is worse?

The difference between Legend and Labyrinth.

Liz’s Cool Pick of the Week: The color your own Lillebaby carrier

Kristen’s Cool Pick of the Week: The Twinsters documentary

If you ever have questions, comments, topic ideas, email us any time at spawned@coolmompicks.com, tweet us @coolmompicks using hashtag #SpawnedShow, and don’t forget to download the episode from Soundcloud or iTunes so you can listen wherever you go. Thanks for listening!