Clear the table for 11 of the best board games for older kids. (Hooray for outgrowing Candy Land!) 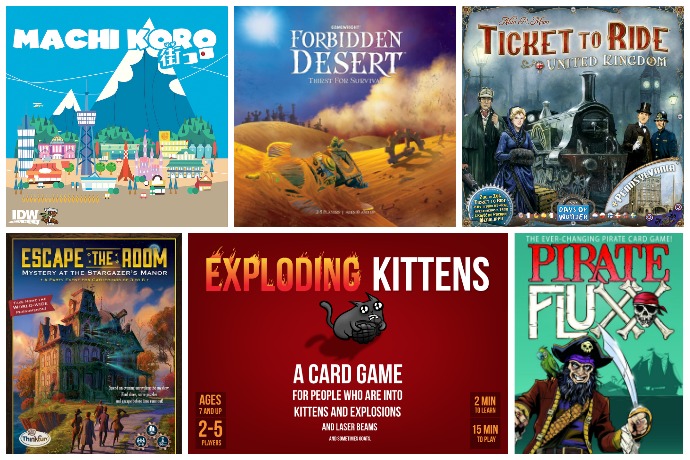 The school year is winding down and I’m looking forward to nights with no homework (yay!) and fewer extracurricular activities on our calendar (double yay!). That means board game night. So I started to track down the best board games for older kids, since mine are quickly outgrowing the likes of Candy Land and Pictionary Jr.

Of course, there are always classics like Risk or regular old Chess, which we’ve loved and played for years at home. But I’ve also discovered some newer games for older kids that are a little more challenging for kids 10 and up. And that, of course, means they’re a bit more fun for us adults to play too. (Sorry, Sorry.)

The 11 I found range from fun party games to strategy games that require a bit more concentration. But all can be played in about an hour or less, which means bedtime isn’t a total bust.

Find all these games at our affiliate Amazon, or visit your local neighborhood toy store.

My kids have been begging us to take them to one of the Escape experiences that are popping up all over town, but at $50 per person, we wanted to wait for a special event. Then we found Escape the Room: Mystery at the Stargazer’s Manor from the indie gamemasters at Think Fun, and decided to try it at home. It’s chock full of challenging puzzles tied together with a mysterious storyline, which means we all have to work together (family bonding, check) to get through it. Be aware that you can only play it once — but it makes for an affordable and really fun night at home with the kids. And if you get hooked, there’s an Escape the Room Second Edition with new storylines and puzzles coming soon.

Ultimate Werewolf is a bluffing game that really works best with a big group and was one of our top picks among our absolute favorite family board games for 6 or more players. It’s like a modern adaptation of “Murderer” or “Assassination” which we all played as kids, in which the goal of the game is to figure out who among us are the werewolves, as they kill the rest of us who are villagers of various kinds. Let’s just say there’s a whole lot of sneaking around that goes on to hide true identities. The game says you can play with as many as 75 players (which, seems, um, unrealistic unless you’re at sleepaway camp), so we’d say at least 6 people make this game a real winner but it’s more fun when you get up to 10 or 12 players; perfect for slumber parties or family reunions.

Exploding Kittens was a massive Kickstarter success and one look at the cards and you can see why. It’s basically a witty cat-themed version of UNO, and you can stay alive in the game as long as you don’t pull an exploding kitten. But even if you do, you might survive if you have the right cards to defuse the bomb. (Lucky for us grownups, they also have a new NSFW version of Exploding Kittens for your adults-only dinner parties.)

Whenever we’re looking for a quick, fun game to play before bed we pull out Ticket to Ride. Your job is to collect cards that match the colors of the train routes you’re trying to build, then be the player with the most points from those routes. Be careful though, because any routes you don’t finish will count against you at the end. The USA version of Ticket to Ride is the basic game, but I prefer the European edition, which has the added benefit of allowing me to mentally plan my dream family vacation.

The thing that makes Fluxx so fun is that the rules are really simple — draw a card and play a card — but then, as the game goes on, the rules change depending on which cards people play. So just when you’re about to win, someone might change the goal of the game and you’re back to square one. And if that isn’t enough variation for you, you can find versions like Fluxx Batman, Fluxx Holiday, Fluxx Pirates, Fluxx Monty Python and dozens others to keep it ever more interesting.

Apples to Apples has become what I think of as a new classic. If you’re not familiar, this is a game that will almost guarantee you’ll end up laughing so hard you cry. To play, a judge lays down a card with an adjective or characteristic, and then other players need to go through the cards in their hands and pick one they think best exemplifies the judge’s word. For example: the judge’s card might read “awkward” and you might play a card that says “my first kiss.” Or “a funeral.” Or “alien abductions.” After players make their case for their choice — one of the funnier parts of the game — the judge chooses the one he or she thinks is best. And it’s not always the most obvious choice.

While the game is rated for kids ages 12+ we’ve played with kid as young as 8 — even if they need help with some of the political and pop culture references — making this a good one when your family has kids of all ages. Of course, there’s always Apples to Apples Jr which is rated for 9+ but again, still so much fun for adults too.

Related: 8 of our absolute favorite family board games for 6 or more players

Lately we’ve been hooked on the games Forbidden Island and Forbidden Desert. In each version, you work together to gather four treasures from different areas of the board before it either floods (in Forbidden Island) or is covered by sand (in Forbidden Desert). If you can collect them all and get away before the land disappears, you win. This is a great game for those of us with kids whose feelings can be hurt easily, because it’s collaborative; you play together as a group rather than competing. Also, younger kids can join in more easily with help from the rest of the team.

In Loonacy: The Maniacal Matching Card Game, you’re quickly slamming down cards to make matches so you can be the first one out of cards to win. Think of it like a more advanced version of Spot It. There’s not a lot of thinking involved, but this one can end up being loud, boisterous, and a whole lot of fun. In other words, don’t play it while little kids are napping.

Telestrations is like a mashup of the Telephone game (in which you whisper a word and pass it around the circle) and Pictionary (which, no explanation needed, we hope). You start with a word which becomes a drawing which becomes a word which becomes a drawing, until what started as “apple tree” somehow turns into “measles.” This game is just perfect for parties, because the more your drawing gets passed around the room the more hilarious it ends up becoming. Plus, there are no winners. You just have fun. You can play with kids as young as about 6 or 7 provided they’re pretty good with letters and drawings. Actually — the worse anyone’s drawing skills, the more fun the game is!

Machi Koro is a cool Japanese card game where you’re the mayor of a city and your goal is to meet your citizens’ demands. All you have right now is a wheat field and a bakery, but the citizens want cool stuff like an amusement park and radio tower. But, as in real life, all those things cost money. You’ll have to be a smart planner to make money fast so you can buy everything the city needs before someone else beats you to it. Needless to say, this is a far cry from that other real estate game we all know and love — the most wonderful difference being that you can play Machi Koro in about 30 minutes.

Pictomania has been called a “gamer’s party game,” so if you’re into more challenging strategy games but need something light to play with friends and older kids, this might be the one for you. In it, you’re drawing pictures of clues you’ve been given, but so is everyone else. All at once. It’s like Pictionary on… a, er, sugar rush. I haven’t tried it yet but based on friends’ accounts, I can’t wait.