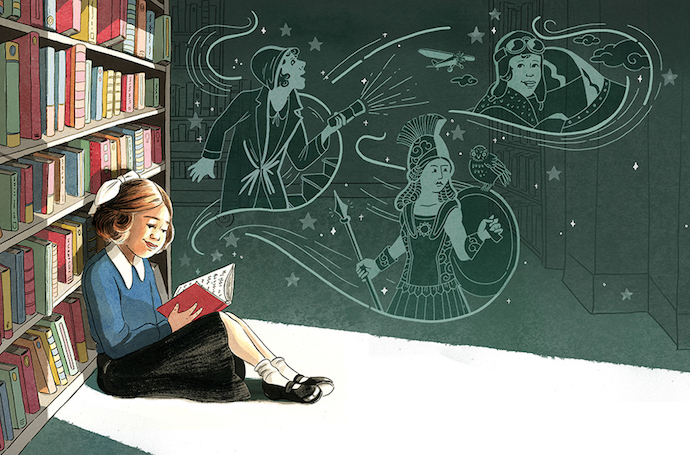 My kids and I have encountered some very memorable girls with very memorable experiences in their children’s books over the years — Madeline’s midnight appendectomy, Freckleface Strawberry (a favorite among my brood of redheads) wearing a ski mask on the playground to hide her freckles, and of course, bossy big-sister Olivia the pig — our favorite non-conformist.

And lately, I’ve been seeing an increasing number of empowering books for girls, all non-fiction stories written by women in the last 12 months or so, of girls busting stereotypes and fulfilling their dreams.

These books teach our kids anything is possible if you work hard enough and are a good, kind person. Because these are ideas we want all our kids — boys and girls — to embrace. Here are 10 of my favorites.

I Dissent: Ruth Bader Ginsberg Makes Her Mark by Debbie Levy and illustrated by Elizabeth Baddeley (also, photo at very top) shows girls that disagreeing isn’t a bad thing. In fact, sometimes it’s the best thing a girl can do. (You can preorder this one now from our affiliate Amazon, or find it in stores September 20, 2016.)

I’d never heard of Millo Castro Daldarriaga before reading Drum Dream Girl by Margarita Engle and illustrated by Rafael López. But the bright, colorful illustrations about this Chinese-African-Cuban girl who broke Cuba’s taboo against girls playing drums (seriously) are so cheerful and fun, they’ll leave your kids asking for their own set of drumsticks.

Voice of Freedom: Fannie Lou Hamer, Spirit of the Civil Rights Movement by Carole Boston Weatherford and illustrated by Ekua Holmes is a really, really important book for us to have our kids reading these days. Fannie Hamer was a champion of equal voting rights during the Civil Rights Movement, and she paid for it dearly — including being beaten almost to the point of death. But her legacy is one of hope and strength, and I hope our kids’ generation will be the one that sees her dream of freedom without fear come true.

I had no clue the Victory Gardens of WWII were initiated by a child. Did you? It’s all captured sweetly in Diana’s White House Garden by Elisa Carbone and illustrated by Jen Hill. This is the kind of book that inspires kids to follow through with that good idea they have, even though they’re just a kid. Because who knows what you can accomplish — at any age.

Related: 5 inspiring new picture books for National Readathon Day that make kids want to get out and play

Ada Lovelace’s story is so interesting. She’s the child of poet Lord Byron and his mathematician wife. Her flair for creativity and passion for science inspired her to eventually invent computer programming. You can read all about it in Ada Lovelace, Poet of Science: The First Computer Programmer by Diane Stanley and illustrated by Jessie Hartland. Yay for smart, STEM-minded girls! (This book is on preorder at Amazon, and is in stores October 4, 2016.)

Anna Pavlova was, arguably, the most famous prima ballerina ever. Artist Julie Morstad’s charming illustrations capture Pavlova’s strong but delicate movement perfectly in Swan: The Life and Dance of Anna Pavlova, written by Laurel Snyder. If dance is in your child’s spirit, then you’ll want to get her this book.

Three-time Olympic gold medalist Wilma Rudolph is one of the more inspiring athletes in recent history, and The Quickest Kid in Clarksville by Pat Zietlow Miller and illustrated by Frank Morrison tells her story through the eyes of a young girl watching a parade in her hometown. The lesson: girls can be just as fast, if not faster, than boys. (But, we already knew that.)

It’s been a very tough election cycle, so I know this book won’t be on everyone’s reading list. That said, I still heartily recommend Hillary Rodham Clinton: Some Girls Are Born to Lead by Michelle Markel and illustrated by LeUyen Pham as a great story of how a determined young girl defied the expectations of her culture to go on to have a remarkable political career as a senator, Secretary of State, and possibly even the first female President of the United States.

Related: Turning kids into readers: 3 simple tips from LeVar Burton to help your kids get excited about books

I love finding quirky non-fiction books with out of the ordinary stories, and Anything But Ordinary Addie by Mara Rockliff with its intricate, layered illustrations by Iacopo Bruno fits that bill. Adelaide Herrmann wanted desperately to be a magician, but women in those days were relegated to the “assistant” roll (and typically still are today). But Addie believed she could star in her own show, so she did. Even if your kids aren’t into magic, or circus themes, they’ll enjoy this book that reminds us all that where there’s a will, there’s a way.

I found this little-known story about a female detective during Abraham Lincoln’s presidency fascinating. The title — How Kate Warne Saved President Lincoln by Elizabeth Van Steenwyk and illustrated by Valentina Belloni — may be confusing since President Lincoln was, in fact, assassinated. But the truth is, there was an earlier attempt on his life that Kate Warne was able to thwart through stealthy detective work in disguise as a society lady. It goes to show how girls can use their situations to their advantage through clever thinking and strong determination.
Tags: books, books for kids, educational kids' activities, educational kids' books, reading, reading with kids