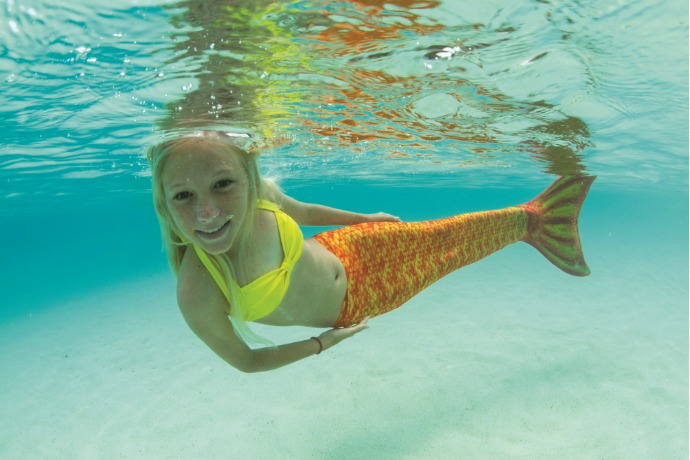 The coolest thing you’ll encounter in the water this summer may be my daughter, who has transformed herself from a normal 13-year-old into a full-fledged mermaid. And, whoa, if you have a child who would love to swim like one of these creature of the sea, you’ll want to check this out this awesome product my kids had the chance to try out.

FinFun Mermaid Tails are real swimmable tails for kids, teens, and adults (though I’m leaving this trend to the kids) that actually let you swim through the water like Ariel — or Ponyo, depending on your family’s animation preferences.

Related: Blankie Tails turn your child… into a mermaid without surgery

Though I was nervous about letting my child into the water wearing something that keeps each leg from kicking independently, I’m now confident that it’s a terrific water plaything for those kids who are strong swimmers.

To get the power to kick through the water like a mermaid, you first need the Monofin Flipper which reminds me of a set of swimming flippers, only shaped like the bottom of a mermaid’s tail. It only took my daughter a few minutes of practice to get the kicking motion down with both legs together, and start cruising through the water.

If you want it to look realistic though (and your kids will), then you have to invest in FinFun’s stretchy, nylon-spandex Mermaid Tails which slip on over the Flipper and pull up to your kid’s waist.

If you have younger kids, FinFun also makes toddler mermaid tails (see below), which have open bottoms — no Monofin Flipper — so little ones can walk and swim naturally in them. They come in 3T and 5T sizes, but even a smaller 7 or 8 year old could probably get into one.

I like that there’s a selection of gender-neutral colors and designs, because what boy wouldn’t want to give this a try too? Plus, they all look pretty darn cool underwater. Just know that the whole thing is going to be a little pricy when you put it all together, so maybe you’ll have to forgo the fancy pool float this year and make this your big swim season investment

I have to say though, I am not so enamored of the Mermaidens, wide-eyed female cartoon characters created by the company that come with your mermaid tail, along with their own coloring sheets and trading cards. It’s not like we need one more cartoon character in our lives tied to merchandising.

Fortunately, my daughter only had eyes for one thing: That tail and Monofin, that together let her become as close to a real mermaid as it gets.

Now a few notes about safety because hey, I’m a mom, and that’s what we think about first:

I’d really only recommend the Flipper to confident, strong swimmers, since they need to have the coordination to kick both legs together. My younger son, in contrast, would need a lot more practice and a pool noodle around his arms before I’d trust him in the pool with one of these mermaid tails on.

And it should go without saying, an adult needs to supervise kids in the water at all times when wearing the Monofin Flipper regardless of how well they swim.

However I like that the design seems to be made for safety. The Flipper is “buoyancy neutral,” meaning it doesn’t weigh down kids’ legs nor does it try to float them to the top of the pool. And most importantly, the Monofin Flipper’s neoprene holds feet in place without straps, but is easy enough to kick off, if the wear gets tired or nervous.

Check out the FinFun website to learn more about the Monofin Flipper, Mermaid Tails, accessories like mermaid fin doll tails, and even a wearable shark fin for kids. You’ll get free shipping on your first order.

Thank you to FinFun for sending CMP a mermaid tail and flipper to consideration.