5 of the hottest Star Wars toys your kids totally want. Trust us. 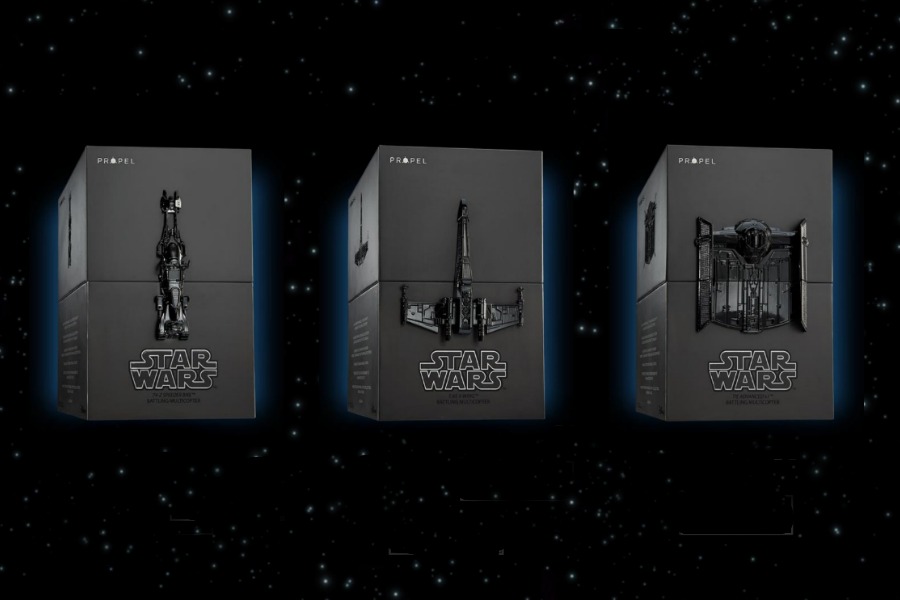 With the perfectly timed December launch of Rogue One, of course Star Wars toys for kids are all the rage. Again. If you’re looking for an awesome gift for your little padawan — even if he or she isn’t quite so little — here are 5 of the hottest Star Wars toys right now that we wouldn’t mind getting in our own Tauntaun fur-lined stockings.

But hurry, with all the urgency of a quadjumper pilot using hyperspeed!

Because if you order all these Star Wars toys now, you can still get them in time for Christmas or Hanukkah delivery — most with free shipping too.

Related: The 2016 Holiday Gift Guide! More than 350 of the coolest gifts for everyone on your list

From the drone masterminds at Propel, these brand new Star Wars drones are so hot that they’re hard to find, but I tracked down a bunch at Brookstone.  Propel sent one out for CMT to try and whoa — we can see why they’re more specifically referred to as Advanced Battling Multicopters.

They’re really designed for teens and up, though with your help, I imagine kids will go nuts attempting aerial roles and the different tricks that each of the three styles allow; there’s the TIE fighter shown here, a T-65 X-Wing Fighter (below, in box), and a Speeder Bike drone piloted with a scout trooper. And if you happen to be in a Star Wars drone club (should there be such a thing) you can have your own laser battle with up to 24 pilots.

These feel as much like high-tech toys as collectors items, considering each one is hand-painted with great detail and numbered, and comes in an impressive display box for all those times you run out of batteries. Or say, “no, you may not play with your Starfighter during dinner.”

Related: Drones and other seriously cool gift ideas for tween boys who are hard to shop for

This may be the coveted Star Wars gift of the year, and it’s certainly getting enough buzz. We even covered it in our list of cool gifts to spoil kids rotten — although it’s not really that exorbitant unless you’re paying triple from some scalper on eBay. And considering we just found it for $50 off at Best Buy, go grab yours!

Or even better, if you already own the original Sphero BB-8 droid, you can add on just the Force Band for $20 off with a price match guarantee.

Just know that unlike other Sphero 2.0 or the Sphero SPRK, this is not a programmable coding toy; it’s a remote controlled robot that can be manipulated using an app. But with the help of the Bluetooth wristband, now your own movements let you control the little guy, Force-style. #LikeaJedi.

For younger kids or collectors, we are totally digging our favorite spud turned galactic samuraii with the addition of a lightsabre and that telltale 70’s mop of hair. (No, he is not Force Awakens Luke, which would require a trendy goatee and bionic superclaw, but maybe soon.)

Or, if your kids prefer the Dark Side,  can you even resist Darth Tater? I imagine he still breathes like he’s suffocating, but with all those eyes, he makes up for it with vision. Ha, couldn’t resist.

One of our recos this year for great holiday gift ideas meant for siblings to share — but easily filed under splurge gifts, too — is this outrageous LEGO Death Star kit, featuring over 4000 pieces including two dozen minifigs of all your favorite characters, human and otherwise.

The intricacy makes this model pretty outrageous, with details like a hangar bay with a moving launch rack, moveable turbo laser towers with spring-loaded shooters,and of course, that iconic trash compator room. The kids will probably be putting this one together until next Christmas.

And hey, if you like the idea but not the price tag also check out all the new LEGO Star Wars sets at Target which start around $24.99 for the buildable figures like an Imperial Death Trooper or the Hoth Attack Rebel Base LEGO kit which are each great for kids starting around 7.

(Death Star $499, LEGO Store; order by noon 12/20 to get free Express Saver shipping, or prepare to print a photo for an IOU gift that is definitely worth waiting an extra day or two for.)

I think I love this because it’s so dark; unzip the Tauntaun (actually a plush tote) to reveal four mini Tsum Tsum from Hoth including Luke, Han Sono, a mini Tauntaun and Wampa. Oh, the cuteness!

For a cute stocking stuffer, I found some individual Star Wars Tsum Tsum on Amazon like the awesome Rei in desert gear for a great price.  Or you can find other sets including the full original 12 Star Wars Tsum Tsum minis or the Star Wars Phantom Menace Tsum Tsum set. Feel free can see the Jar Jar Binks ironically if it helps you pull the trigger on that one. These all have free Prime shipping for Xmas arrival.

(Tautaun Tsum Tsum set $34.99, Disney Store, requires two-day or three-day Express Ship for Xmas delivery; can also reserve and pick up in your local Disney store if you want to save on shipping charges.)