The coolest lanyard pattern instructions that every camper needs. 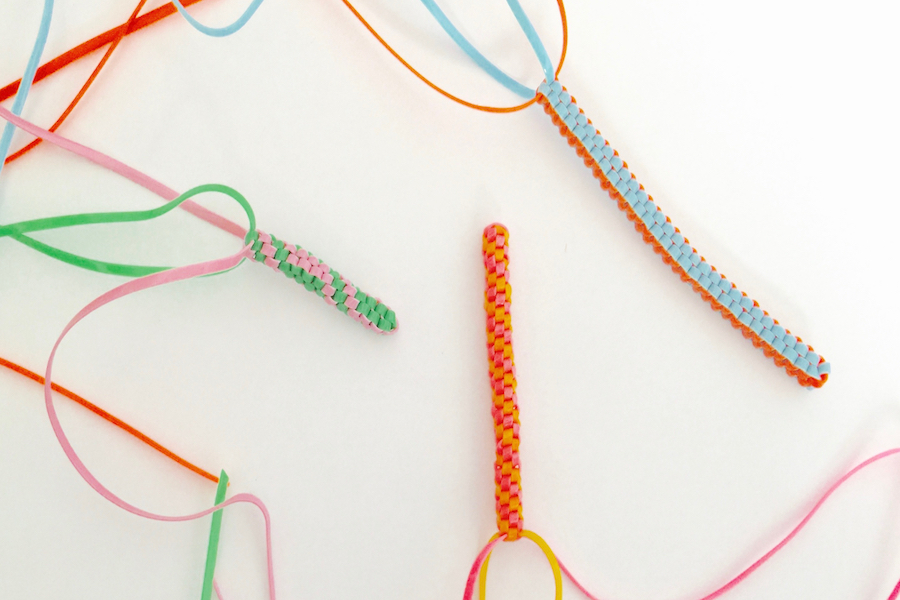 Lanyards are a summer camp mainstay — remember making them back in the day? But like so many things from our own childhoods, these knotted summer crafts have only gotten way cooler.

Lanyards (also called scoubidous, scoobies, boondoggles, scooby doggles, gimps, and rexlaces, among other things, which makes for an interesting Googling experience) are made with strips of flexible, colorful plastic, resulting in neat designs.

After poking around and trying some out — see the ones at the very top, I did those with zero experience; cool, right? — I settled on these tutorials for the coolest lanyard patterns to seriously impress everyone at summer camp.

It may not be the most glamorous of stitches, but this is the No. 1 building-block stitch that you need now to get fancier later. So I Make Stuff has tons of good advice and cool lanyard patterns, and her video tutorial for this beginning stitch is clear and easy to follow, which is critical when you have a pile of craft lace in front of you and no idea what to do with it.

Once you have the basic box pattern down, you can let loose with patterns that use three strands (creating the six-way lanyards, above). Let’s get wild, people!

Scoubi-Doggle’s written lanyard pattern instructions (corrected link) are as concise as possible, and the photos of each step don’t hurt either. (Note, their mobile app is no longer available.)

Related: The best summer camp care package ideas for tweens and teens: A helpful list from a mom who’s been sending them for 8 years

Laneyards has a lot of videos devoted to cool lanyard patterns, and he talks you through every weave, real time, as it happens. Even if you’re not normally into instructional videos, they can be super helpful with lanyards that are more complicated than others (like the Swirl, above).

If you were studious enough to learn the box stitch before all else (ahem), then this heart lanyard pattern — and other shapes too — really isn’t as hard as it might look. Mr. McRafty’s lanyard video tutorials are silent, with only written instructions, but to-the-point enough that you’ll be making things like interlocking hearts and dollar signs in no time. Cool!

This Pikachu scoobie by the YouTuber LanYarD is no easy feat — hence the “part one” in the photo above (there are still two video tutorials to watch before you can craft the little guy). But the result is probably well worth the effort. And time. And patience.

Related: 50 screen-free activities for kids to do over summer break, indoors and out

If you want to get really fancy, you also have to get a little French. The art of scoubidou began in France, so there are lots of tutorials that will require some working knowledge of the language, or at least some help from Google Translate. The cool lanyard pattern above is from Les Fous De Scoubidous (note:the  site is no longer online but check this comprehensive PDF lanyard guide from 29th Dublin), and you won’t really need either to tell what it is: L’Escargot.