What parents need to know about Sarahah, the anonymous commenting app that makes cyberbullying a snap. 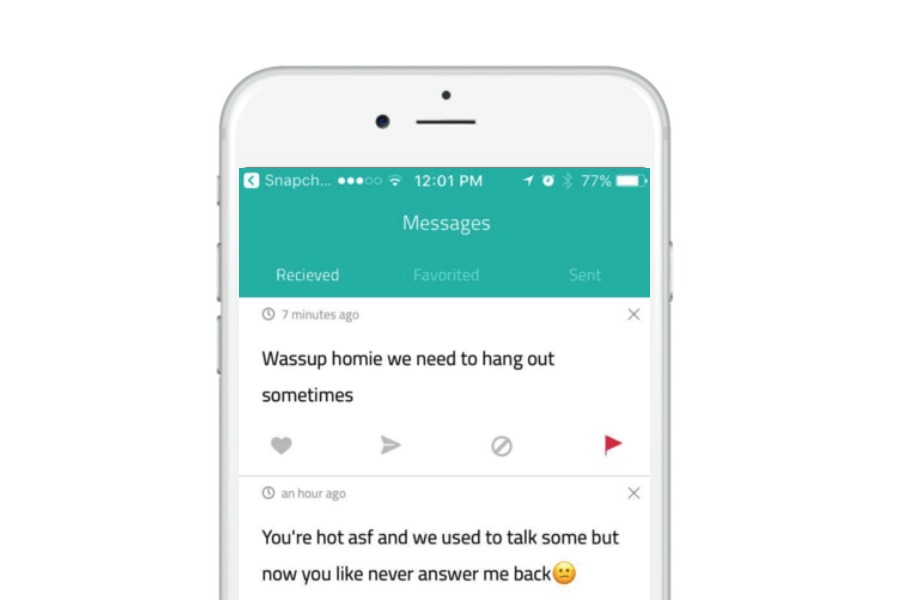 The number one concern we hear from parents when it comes to kids and their devices is online bullying. Which is why we think you’re going to want to know about the new Sarahah app.

This personal bulletin board app has blown up all around the world, with a whopping18 million downloads and counting. But it can be dangerous territory for kids, since all comments left here are written anonymously.

Does this sound like a great way to get honest feedback — or a bullying disaster waiting to happen? Here’s what we think you should know. -Kate + Liz

Related: What parents need to know about the Roblox app, a minecraft alternative that lets kids chat with strangers. Eep.

What is the Sarahah app?

Sarahah comes from the Arabic word for “frankness” or “honesty.” It was recently the top downloaded free app in the entire App Store and shows few signs of slowing down.

The app was designed to allow users have their own personal bulletin board, where anyone at all — even if they’re not logged into Sarahah — can leave an anonymous message, though users have the choice to tag their identity or not.

You can’t follow anyone, though you can keep track of comments you receive, send or favorite.

Originally, it was created to give employees a way to leave constructive criticism for their bosses without worrying about their jobs, but now teens are using it to compliment each other’s hairstyles, ship their friends, or just leave completely random thoughts.

What are the bullying concerns with the Sarahah app?

Of course, due to the fact that all comments on the Sarahah app are anonymous, this is fertile ground for bullying.

I mean, have you ever looked at the comment section on Urban Baby? How about YouTube? Instagram? Any blog, magazine or newspaper comment section? Of course we all already know the worst that the anonymity of the internet can bring. And that’s just with adults.

It’s giving some of us flashbacks to the days of slam books out of Judy Blume novels. Although with a slam book, at least we could narrow down who in the room might have written that our hair was frizzy and our boobs were lopsided. (That is, if we couldn’t immediately identify their handwriting.)

With Sarahah there is literally no accountability whatsoever. Inverse calls it “essentially little more than an open inbox” and while you can’t respond to messages directly, you can share a response through other social channels, or even link your posts to a Snapchat account now. This makes a user less anonymous, though not the commenters.

And while your teen may be incredibly responsible with their use of social media, it’s important to know that bullying is wildly prevalent and this is just one more form factor.

According to the Megan Meier Foundation which was founded to stop bullying and cyberbullying, research shows that more than one-third of students have reported experiencing cyberbullying; and peer victimization has lead to increased issues with mental health and even an increase in suicide rates.

Related: How to talk about safety with kids: Why we talk about tricky people and not stranger danger.

One of the biggest scandals about Sarahah right now has nothing to do with bullying at all.

It was recently revealed that Sarahah has secretly been uploading all the email and phone numbers from Android address books without asking permission first. In fact, it was only discovered thanks to an analyst with monitoring software installed on his device — something kids aren’t likely to have.

However this does mean that if if you know anyone at all who has your phone number or contact info stored on an Android device, and they’re one of the 18 million people using Sarahah, then your own private information has likely been breached.

According to the Sarahah terms of service and privacy statement, they state they won’t “sell, trade, rent or disclose any information to any third party” — but honestly, it’s a pretty thin privacy statement for a social app and it does give us pause.

Related: The one big issue with the Snapchat Snap Map feature that no one’s discussing — but should

What’s the bottom line on Sarahah for kids?

We’re not quite sure about the benefit of kids getting anonymous, “constructive” feedback through Sarahah.

It seems like the app would be used either to fish for compliments (which may or may not come), for random time-wasting (like kids can’t do that enough with their other apps), or for leaving feedback — positive or not. Other kids may just want to lurk, downloading it out of peer pressure or FOMO.

Either way, we can’t imagine how the benefits for kids outweigh the risks of being subjected to anonymous cyberbullying; or even the opportunity to “try” bullying others.

(Even the best kids dabble with meanness during adolescence.)

While there is a new feature on Sarahah that allows users to control who they see messages from — which may cut down on some of the issues with anonymity — and you can remove your profile from search results through settings, neither addresses the fact that the Sarahah app’s core purpose is anonymous commenting.

So what can you do?

As we always say in our tech tips for parents, the first and most important thing you can do to look out for your kids’ safety is to have to “the tech talk” early and often. Keep communication channels open about all things, including use of apps.

You should also know exactly which apps are on your kid’s phone and have access to them at any time; in fact, we highly recommend setting notifications so that you have to approve any app at all that your kids download.

Also, you’re the parent. You get the right to say no. It’s okay. Your kids will survive without Sarahah, especially since it doesn’t serve even the purpose that Snapchat does as a social network and news source for so many kids.

And, keep an eye on it; it could evolve into something more positive at some point (remember when Snapchat was called the sexting app 5 years ago?) but that’s definitely a big maybe.

In our opinion, if our kids want a way to send anonymous, encouraging messages to their friends right now, we’ll get them a pack of Post-Its.