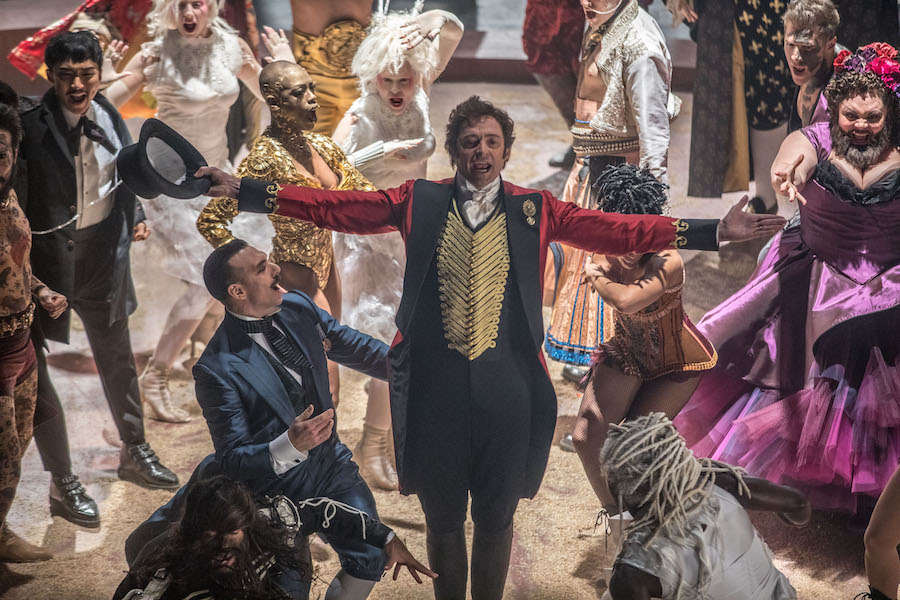 If by now you haven’t heard about The Greatest Showman, well where have you been? Wrapping gifts or something? Geez.

This has been one of the biggest PR blitzes I’ve seen in a long time. And that was before its three Golden Globe nominations.

If you’re like me, and film hype sometimes deters you, I’m here to say, don’t let it.

The Greatest Showman is one special film, and while it’s rated PG, I can’t think of a child I wouldn’t bring to see it, including my five-year-old niece.

I screened the film during the NYC press junket, braving the A train on a snowy Saturday. I realized on my way uptown, I had literally no idea at all what to expect.

What a nice surprise to be blown away.

(So no spoilers here, promise. I’m the “don’t tell me anything!” type and maybe you are too.) 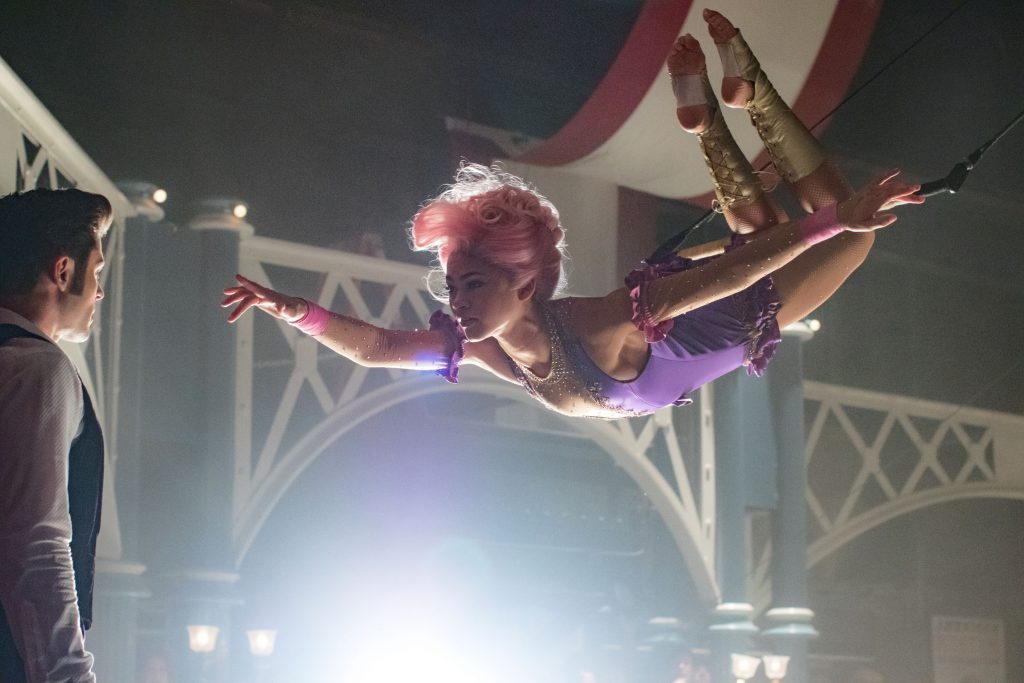 The (spoiler-free) gist, as you may have guessed: this is the story of PT Barnum — kind of.

In fact there aren’t even any animal acts depicted in the film (with the exception of a few CGI elephants at the very end as I recall). So Jenny Bicks’s story is not a historically accurate film about circuses. Or even about life in New York in the 19th century.

(Unless 19th century new Yorkers waltzed on rooftops, sang in perfect harmony with their coworkers while juggling shot glasses, or broke out into flash mob dance routines under the IRT 3rd Avenue line. Which would be awesome. But I suspect that stuff didn’t happen. Much.)

The Greatest Showman is that special kind of family film that works on a number of different levels.

(Zac Efron referred to Hugh Jackman as “quite literally the most versatile actor alive” and this role yet again solidifies that description. As if I didn’t already give him that title after Les Mis.)

But the joy of getting older, is that when you see films like this, there’s just so much more to process and enjoy and think about when you dig deeper and unpeel all the layers.

Fun trivia: The title song was co-written with Ryan Lewis of Macklemore and Lewis.

The movie has nothing to do with suckers born every minute, and everything to do with personal acceptance. That was the biggest surprise to me, and the reason I think it’s so important to have more films like this for our kids to see: joyous, exuberant, thoughtful and empowering.

And while it’s not a perfect film, even the minor flaws, occasional slow moments, and suspended disbelief you’re expected to have (see also: dancing on rooftops, quickly resolved problems) never interfered with my enjoyment. Especially as the film picked up steam in the second act and hurled us through a surprisingly emotional ride.

I’d even suggest that it’s a film that gets better the more you think about it, and the more you listen to the incredible soundtrack.

I love movies like that, considering so many these days fall out of my head before the faux butter popcorn grease has even dried from my fingers.

Much of the credit must go to Oscar- and Tony-winning songwriters Benj Pasek and Justin Paul (La La Land, Dear Evan Hansen) whose soundtrack is inspired by artists as diverse as Queen, Kanye, Ingrid Michaelson, Billy Joel and Imagine Dragons. It feels fresh, young, and modern, which is no small feat when you’re writing about, you know, a 19th century circus.

In fact, whether you see the film or not (and I think you should see it), I feel an obligation to draw your attention to the standout song on the soundtrack, the one I have listened to every single day for the past two weeks.

This Is Me literally makes my lip start quivering when we hear the first lovely notes from Keala Settle (Broadway’s Waitress) singing as the Bearded Lady over the gentle piano intro:

I am not a stranger to the dark
“Hide away,” they say,
“Cause we don’t want your broken parts”
I’ve learned to be ashamed of all my scars
“Run away,” they say
“No one’ll love you as you are”

And then the quivering becomes a big ol’ ugly cry when Keala belts out the first chorus in full-on, unapologetic, power anthem mode:

Seriously, my kids make fun of me. But I can’t help it.

I even got emotional just chatting with Benj Pasek about the song, and how truly meaningful it is to me as a parent of a middle-school daughter, and a middle-school survivor myself.

He and Justin have written an anthem for Barnum’s “oddities,” but it’s truly the perfect anthem for our time — for kids, for young women, for women who’ve been around the block (ahem), for the LGBTQ+ community, for people on their own path, for anyone ever been called “freak” or “nerd” or “weirdo.”

It’s even for anyone who’s ever experienced imposter syndrome in any form. Ahem.

Which brings us back to the reason I hope you grab your family a block of tickets over the holiday, enjoy it fully with the magic of a big screen with big sound, and take a break from the rock-em-sock-em superhero fare. 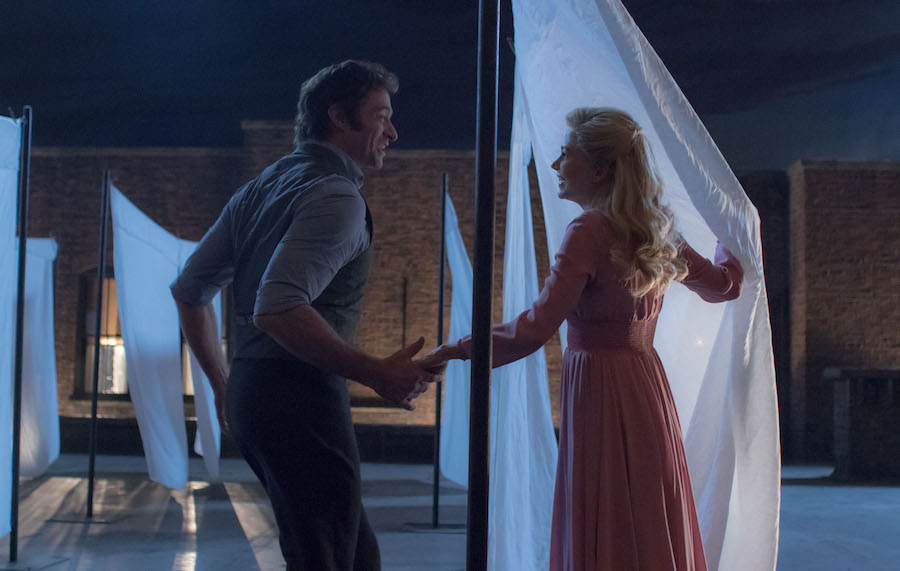 Hugh Jackman and Michelle Williams as the Barnums

I asked Hugh Jackman as a dad, what he’d want his own children to take away from the film. His answer cut straight to my heart.

I love the message of this movie, of accepting ourselves for who we are and what we love and the things that really make us feel passionate and not worry about what anyone else thinks.

I have a 12 year old and I have a 17 year old, and I think…the pressure not only from peers but from advertising, from so many different sources is that there is a preconceived idea of what is cool, of what is good looking, of what is going to get you acceptance, that actually more than ever–and this movie is speaking to that.  That actually being yourself is the coolest thing you can do.

Actually owning up to the things that you love, the music that you like, the food you want to eat, who your friends are, the things you want to do whether it’s cool or not, that is where the joy of life is.

I really adore that the same sentiment was echoed by everyone in the cast I spoke too, including Zac Efron (charming and funny as you’d imagine), Keala Settle (who I want to be my new best friend), Rebecca Ferguson (I expect more incredible performances from her), and then…Zendaya. Wow, Zendaya.

She is an honest, passionate, thoughtful young woman, wise beyond her years, and it all comes through in her wonderful performance. She admitted to me that she knows she has the power to reach millions of millennials and young fans with her work, and that factors into what she chooses to do with her life.

In fact, her own description of the film really moved me.

We’re not saying this is how you should be. It’s saying we want you to be the best version of yourself. So, nobody’s saying, “I want you to be just like Zendaya.”

We don’t have to be bearded ladies or conjoined twins to know just what she’s talking about.

You can see The Greatest Showman, in theaters starting December 20 — that’s tonight! Thanks to 20th Century Fox for inviting me to the screening and to participate in press interviews. See some of my photos with the Greatest Showman cast on the @coolmompicks Instagram feed.