Les Miserables movie review: Quite easily the movie of the year 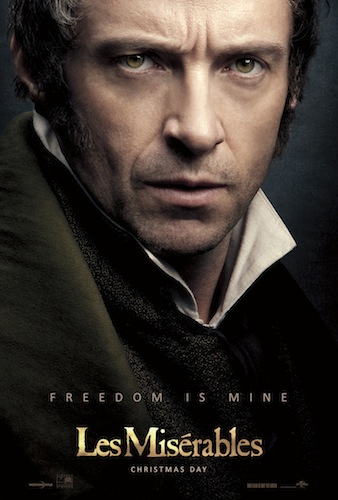 Let me start by saying I am not some Les Mis groupie. I have never seen the play or even read Victor Hugo’s book, so it’s not like I have childhood memories to stir up. That said, I cannot think of the last time I walked out of a movie saying, I can’t wait to see that again. And that’s exactly what you’d have heard me say immediately following a preview screening of Les Miserables.

At least you might have heard it, if could understand me through the sniffles and the tears still running down my face.

[Read on for our review of Les Mis, and thoughts on whether the movie is good for kids or not. Also don’t miss exclusive commentary from Hugh Jackman, Anne Hathaway, Tom Hooper and the producers.]

Tom Hooper undertook a whopper of a project following his Oscar-winning direction of The King’s Speech. Not only is it a movie musical, something lead Hugh Jackman refers to as “the Mount Everest of film making,” but one based on a play so beloved by so many people for so many years, I can imagine the number of folded-armed, cynical fans just waiting to hate it.

This new classic is everything an epic film should be, musical or not.

And if Anne Hathaway doesn’t break your heart into a million tiny pieces, then I don’t know what will. Just ask my sigOth who cried through a movie for the first time, I think, ever. (Though he’s still claiming allergies.)

One of the standout choices Hooper makes in this film is the insistence that all the actors sing live. In other words, they are really singing to the cameras–often in single takes–with nothing but a lone piano piped into a small earpiece. What that means for us is remarkable emotion and authenticity; a stark contrast with pretty much any other movie musical you’ve seen, where the lip synching feels flat and the perfect singing during exhausting dance numbers (no breathlessness?) comes across like a cartoon.

Here, with nearly no dialogue between songs, it’s the extraordinary singing by remarkably capable performers that brings these dimensional, wonderful characters to life, and carries you effortlessly through a long film without once checking your watch. And for me, that’s saying something.

In nearly every performance, the singing is spectacular–Hugh Jackman is at the top of his game as the tormented hero Jean Valjean; the perfectly cast Anne Hathaway as Fantine will have you sobbing through I Dreamed a Dream; newcomer and It-Girl-To-Be Samantha Barks as Eponine just kills On My Own; and Amanda Seyfreid really surprises as the grown Cosette, with a voice as sweet as anything. (“You hit that high C!” Hathaway joked with her during our interview.)  Eddie Redmayne plays a wonderfully sympathetic, charming Marius, and no doubt he’ll be the future crush of a whole lot of girls.

Then of course there’s 10 year-old Isabelle Allen, whose face is plastered all over the NYC subway system right now, and is pretty much guaranteed to be the Next Big Child Star.

Now I hate to say it, but I felt the one weak link among the principals was Russell Crowe, who, while he plays a steady Javert, can’t quite master the emotion through his singing the way the rest of the cast can. It’s not a huge complaint, but I did find myself feeling that while the rest of the cast over-delivered on my expectations (Hathaway, especially), I somehow had hoped for a little more from Crowe.

As for the somewhat controversial casting of  Sasha Baron-Cohen and Helena Bonham Carter as the Thernadiers,, I don’t care what any critic says -they were brilliant. Tim Burton fans will recognize a lot of Sweeney Todd in those performances (and hair, and costumes), and while certainly the scenes with them are broad, I think it totally works. They’re no more broad than the pink-cheeked prostitutes draping themselves along the waterfront stairways in the first act; and let me tell you, I needed their quirky performances desperately to release so much of the tension.

My understanding from speaking with Tom Hooper is that his film stays quite true to DNA of the original play (original theatrical cast members even appear in minor roles in the film), but it veers where it needs to in order to be a spectacular film experience. In fact, Hooper commissioned an additional song for Jackman  to sing about his love for his adopted daughter, because the director felt that relationship was so significant in terms of Valjean’s redemption, it warranted a little more attention.

In addition to Hooper, I had the chance to speak with the producers including Sir Cameron Mackintosh, and the lead cast about the film–and was happy to hear nearly all of them echo my feelings that this is a movie whose time has come.

The parallels between the class turmoil and political revolutions–whether in Egypt or right here in the Occupy Wall Street Movement–and those in the film are unavoidable. Hathaway even described researching current day victims of sexual slavery, and feeling obliged to give them a voice through her Fantine.

As a parent, of course my thoughts turned to whether I would bring my children to this film. I want them to understand many of the themes, and in fact, some of them are things we already discuss at home. So I asked (the ridiculously charming) Hugh Jackman, whose 7 year-old daughter is the exact age of my own–four days apart, we figured out–how he talks to his children about the themes in this film especially in light of his visible commitment to charities like Global Poverty Project and WorldVision.

“For kids,” he said, “equity is the way the world is meant to be. They naturally see the good in everyone around them and the equality in wherever they go.”

(And now, I am determined for our daughters to set up a playdate because I think they’d love each other.)

Indeed he acknowledge that some of the themes might be “a little too brutal” for his 7 year-old, but that the themes would resonate for sure.

Interestingly, I then spoke with producer Debra Hayward, a mother of three, about the same topic. She asserted that she was glad I had brought up the parental question–and in fact it lead her to decide that yes, she would take her eight year-old daughter to the film. She made a very compelling case about why I should take mine too.

(“What? Your kids like Lord of the Rings and you’re worried about this?”)

Now certainly, to echo Jackman’s point, there are themes that are very challenging–it is war, after all. There’s slavery, lepers, parental neglect and abandonment; prostitution, gun fire, and of course the tragic fate of Fantine. There are a few bawdy moments in Master of the House, but it’s so campy and quick that I don’t know my children would even catch it. And of course there are children and beloved characters who die in the course
of the revolutionary stand-off.

When I put it in those terms, you might think, why in the world would anyone take a kid to this? But I think you can also look at the grander themes in sort of a Socratic way–parents who would do anything for their children; the idea that “bad guys” aren’t always bad and the people in charge aren’t always right; the kindness of strangers; the idea of standing up for what you believe.

I can have those conversations with my five year-old right now. Though I do think she’s not quite ready for the film.

Besides? The music is just awesome. We’ve been listening to it all week and my kids are already trying to commit Castle on a Cloud to memory.

In my opinion, a mature 7-8 year old can handle Les Mis, if you talk him through a lot of it (and perhaps wait for the home video)–but you know your child best. Tweens and teens will be absolutely fine. It might not be the feel-good Christmas day movie that you want to see together on the day it opens, but it’s not exactly depressing either.

Yes I cried. A lot. But I also walked out feeling reassured about justice and love and redemption and new beginnings.

If you can grab a sitter one night over the holiday break, I can’t think of another movie in recent memory that absolutely warrants the stupid expensive cost of a movie night out. I don’t care how big your high-def TV is; you definitely want to see Les Mis on a 52-foot screen, with an audio system that shakes your seats with the cannon fire and the bass of Do You Hear the People Sing.

Now this is a very strange thing for me, but I feel like I want to thank the entire cast, the entire crew, the entire production team for making Les Miserables. There’s something about it that digs right into your heart and refuses to leave, maybe not ever.