11 clever Oscar party ideas that deserve awards of their own 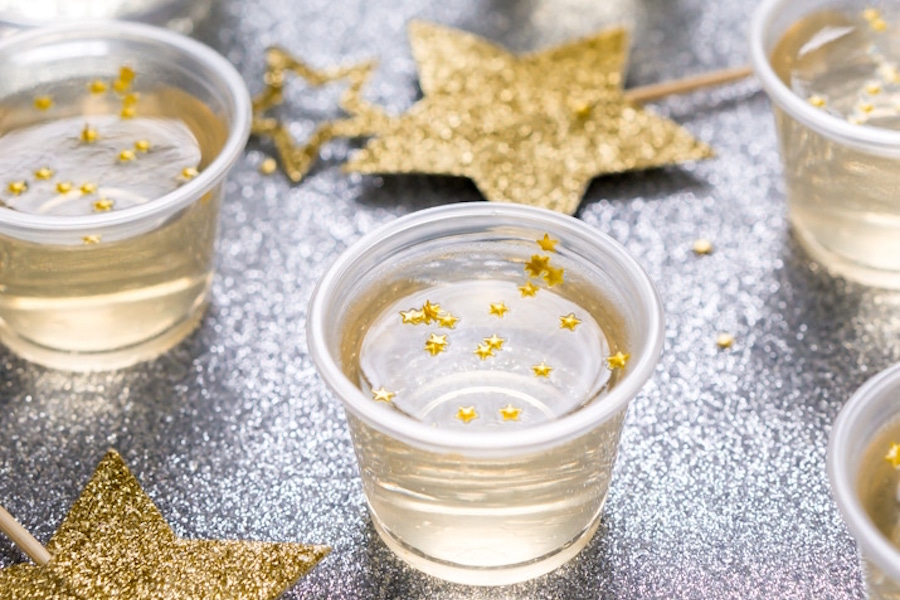 Whether you’ve watched every Academy Award nominated film this year, or your list begins and ends with Coco (no judgment, parents!), Oscar parties are always a fun excuse to get everyone together for Hollywood-themed food, drinks, decorations, activities, and puns. So very many puns.

With the 90th Academy Awards just days away on March 4, now is the perfect time to go ahead get all your Oscar party ideas ready, so we’ve got some awesome ones for you to get the inspiration going. And…action! 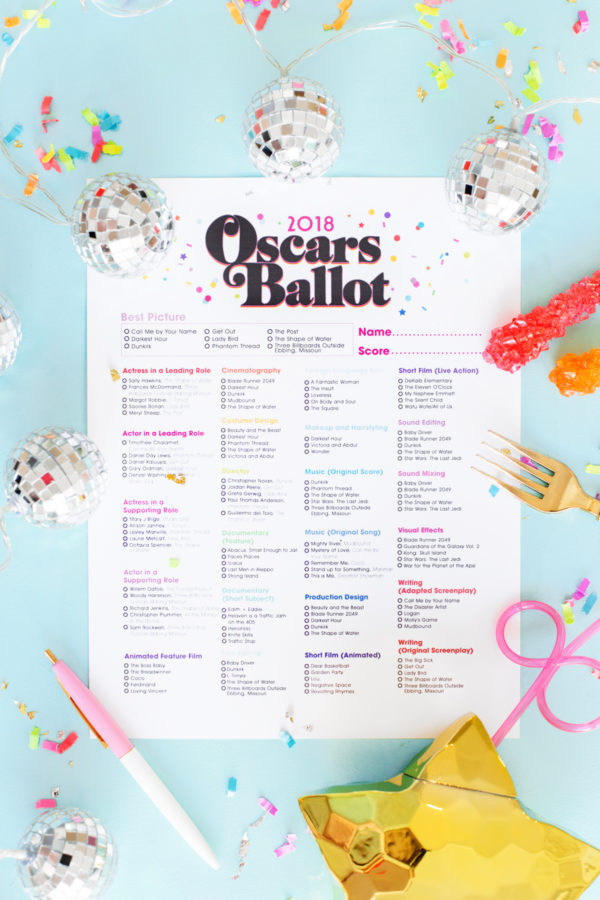 Every Oscars party needs an Oscars ballot — with all the categories, because that’s what makes it a challenge. This free printable 2018 Oscars ballot by Studio DIY is perfect. And if you want to make it more interesting, throw in an extra prize to whomever guesses Sound Editing or Animated Short Film correctly. 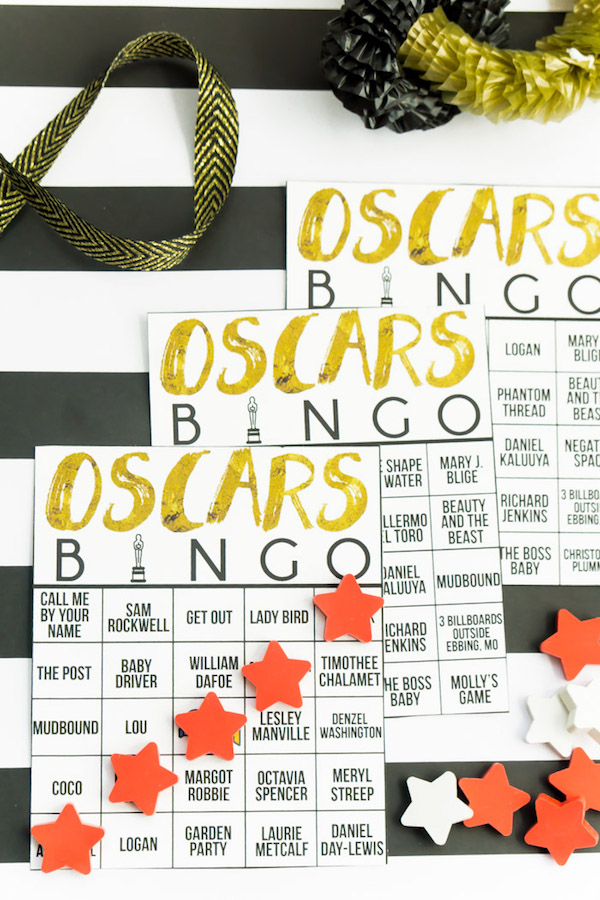 As an alternative to the Oscars poll, try bingo for a cool Oscars party idea! I love these cute 2018 printable Oscars bingo cards by Play Party Plan because they’re super specific to this year’s awards, and also love that you can change the rules to whatever you want — say, you get a star if the movie or actor is mentioned on the red carpet, instead of that person actually winning.  And I really love you can print out blank cards so you can customize the squares yourself. 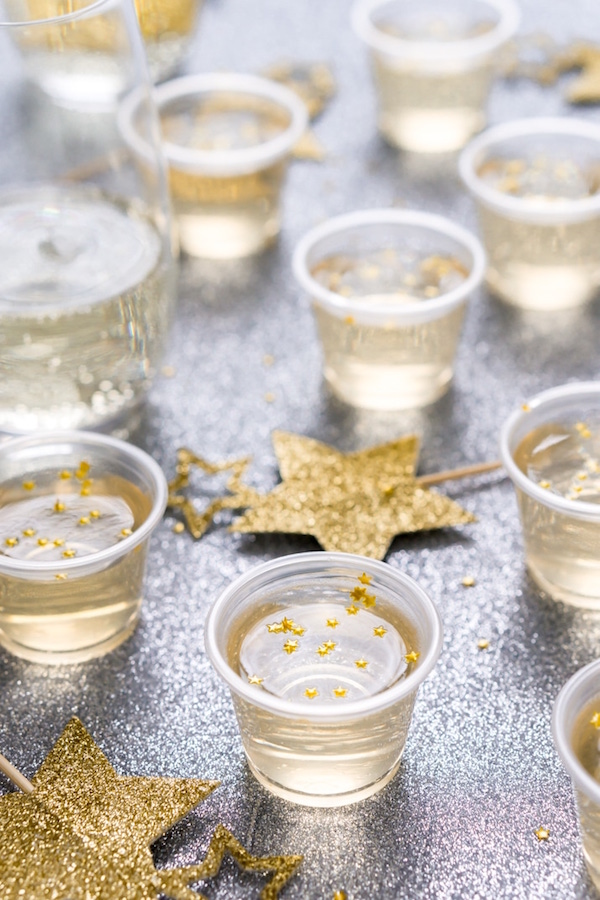 One of the pluses of Sugar and Soul Co’s Oscar party-worthy champagne Jell-O shots recipe is also a tiny con: They’re so pretty, kids may want one too. But…so pretty! And you can always make them without champagne for the kids. Golden! 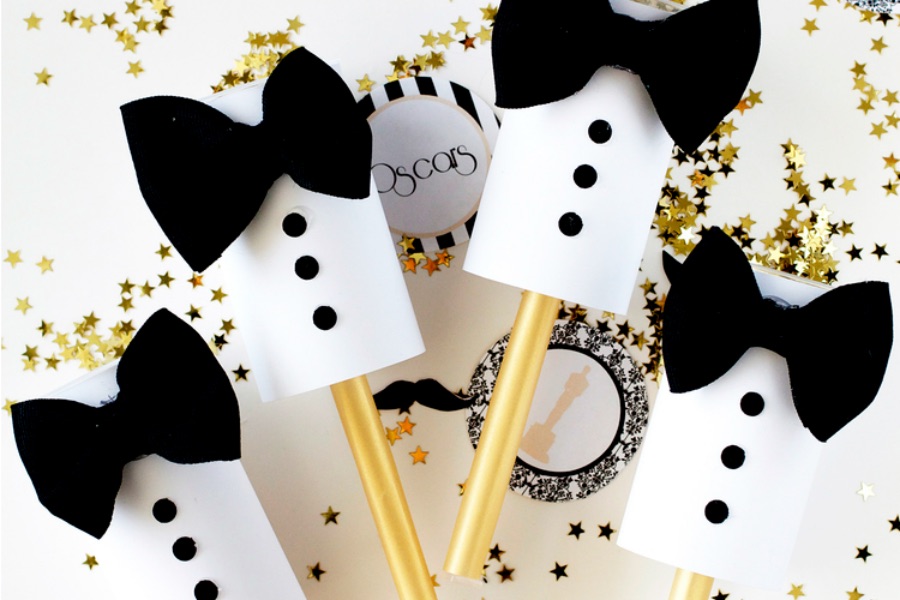 If your first reaction to these fantastic DIY tuxedo confetti poppers by Kristi Murphy is a sharp intake of breath, I’m going to ease your worries with one sentence: Confetti. It’s way easier to clean up than glitter. (Like, way.) 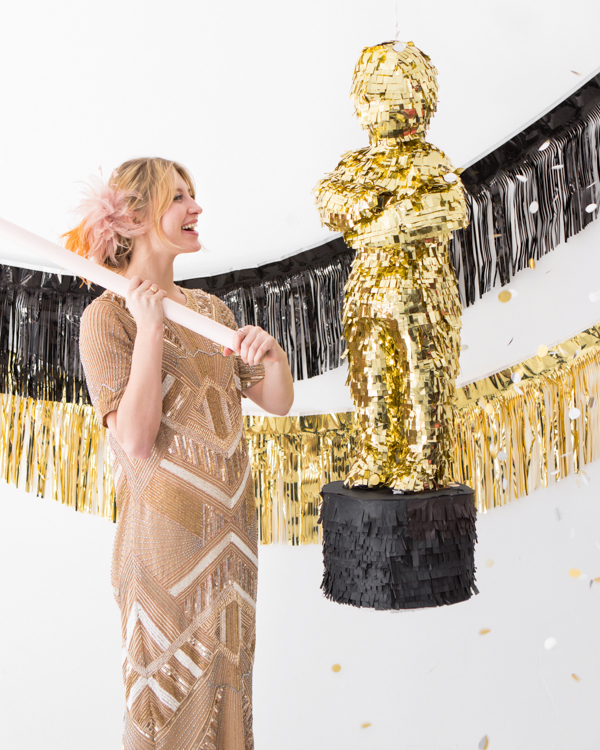 It’s not at all unusual for the Academy Awards broadcast to last a good four hours, which is…a really, really long time when you’re a kid. Or a parent, for that matter. Especially for those of you on the east coast who have work Monday morning! But Oscar party games can help keep everyone going, and I think Oh Happy Day’s DIY Oscar piñata wins an award for production design. It’ll take a little roll-up-your-sleeves time to give a store-bought piñata a glam makeover, so get going! 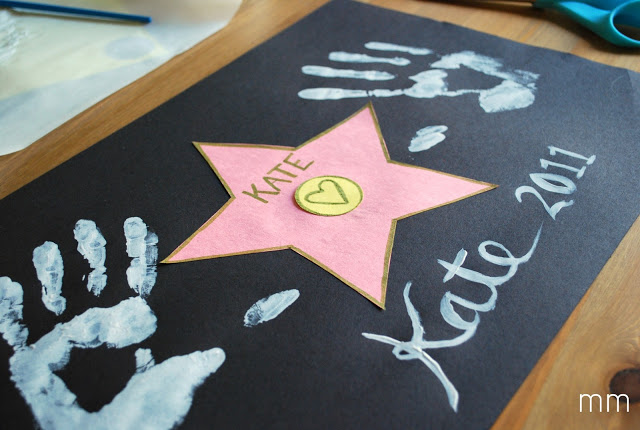 This Hollywood star DIY by Miranda Made is such a cute idea for a kids’ Oscars party activity. Easy, too! You probably have all the supplies you need already, and the hands-in-paint action means there’s just enough mess involved to keep kids interested. 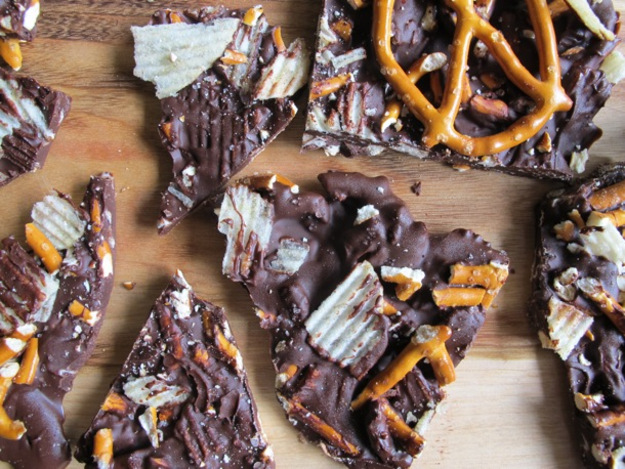 Serious Eats has a whole party menu devoted to the 2018 Oscars, with recipes ranging from appetizers like Willem Da-Foie Gras to main dishes like Calamari by Your Name and Guillermo del Tortas. (See? Puns!) The recipe for the Barkest Hour Potato Chip and Smoked Salt Chocolate Bark that you see here, looks both easy and delish. A winning combo if ever there was one. 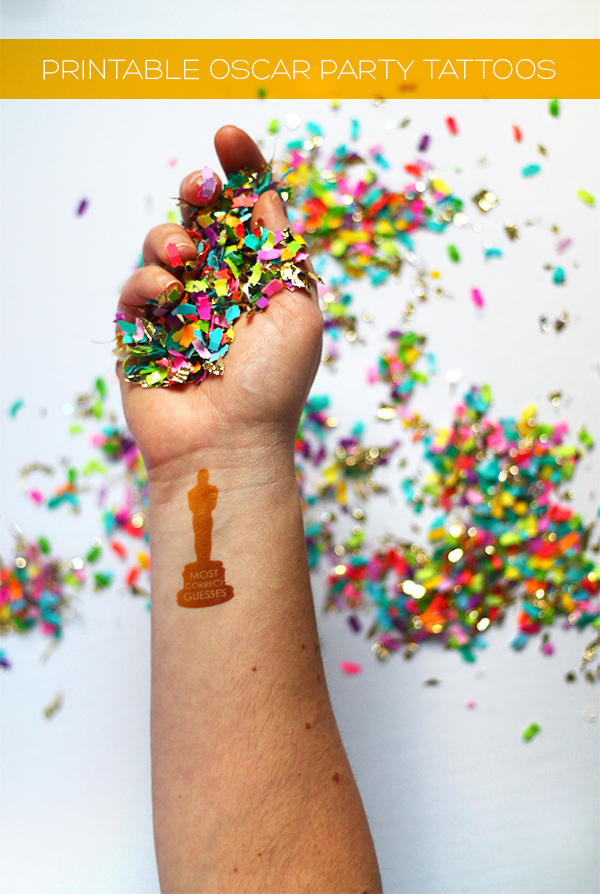 Give this free DIY printable Oscar party tattoo by Squirrelly Minds to the person who guesses the most categories correctly, but they’re not the only one who gets some ink. The printable sheet also includes awards like “Most Movies Seen” and “Best Dressed,” along with unmarked statuettes so you can figure out a way to give everyone in the house an award for something. 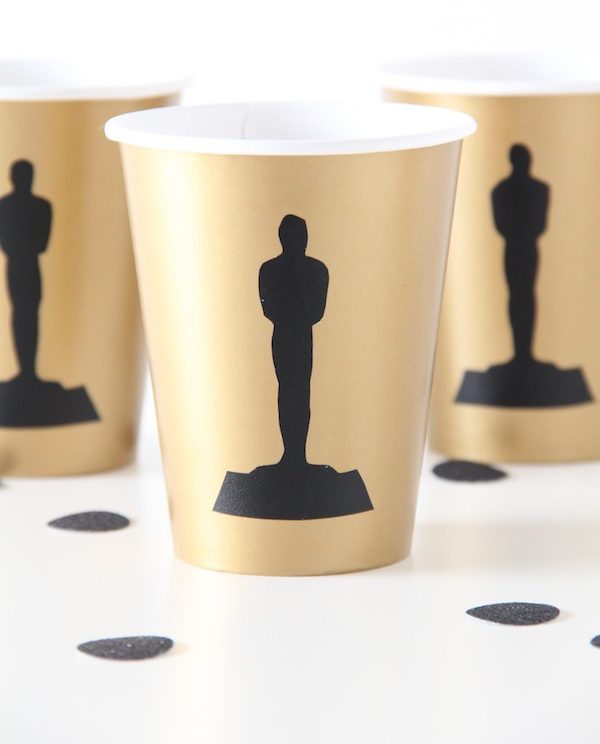 Sure, glass stemware makes any Oscar party instantly fancier, but I’ve got one word for you: Kids. Instead, it’s easy to make these DIY Oscars party cups thanks to And We Play. They’re are just as fun and festive as your real glassware, 100% less breakable. 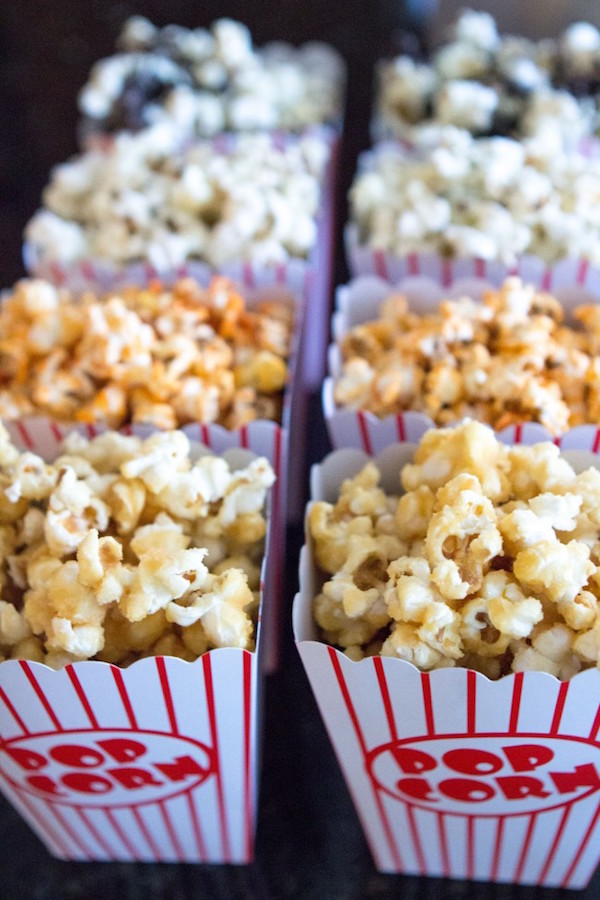 Popcorn is the perfect Oscar party food — it couldn’t be easier, and how many people do you know who would turn down popcorn? It’s especially smart to set up a popcorn bar for your Oscars party, like this one by SISOO, which includes flavors like truffle rosemary, buffalo cheddar, and cookies and cream. Yum! Check the site for recipes. 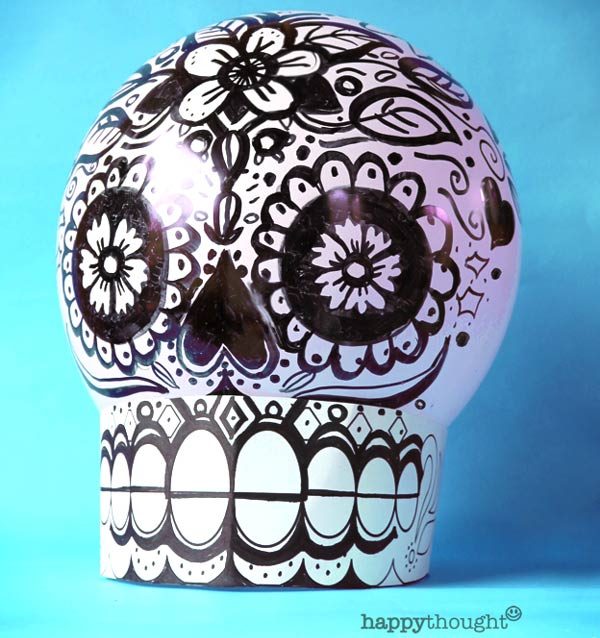 In honor of Coco, the only film that half of our readers will have seen (ha),  check out some of our favorite sugar skull crafts that we featured a few months back around Diá de los Muertos. This sugar skull balloon craft from Happy Thought is a favorite because it requires just a few supplies, and can be an awesome go-to when everyone loses attention during the Price-Waterhouse guy’s speech.
Tags: crafts, diy, entertainment, food, free downloads, movies, Oscars, party decorations, party favors and supplies, party ideas, party recipes, printables