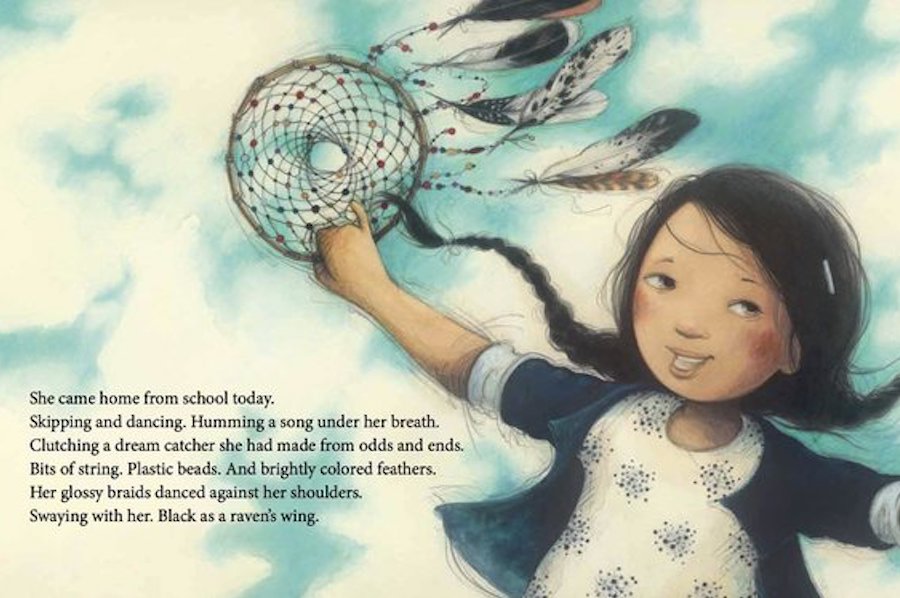 Today, the second Monday in October, is the day that’s been traditionally celebrated as “Columbus Day” in the U.S., but knowing now what we know about Christopher Columbus, the holiday is fast transforming into Indigenous People’s Day. If you’re wondering what Indigenous People’s Day is, and want to better explain it to your kids, here are a few helpful facts, plus lots of websites, articles, and books that can help you all learn more.

Native American history is American history. And there are just too many incredible resources out there for us not to know as much as we can about the original inhabitants of the continent we all live on today.

Top: An illustration from Stolen Words, by Melanie Florence and Gabrielle Grimand

This post may contain affiliate links, and some purchases generate a small commission that supports the work of our independent writers, at no additional cost to you. We appreciate your support!

What is Indigenous People’s Day?

Indigenous People’s Day is not some newfangled thing, to be clear.

It started as early as 1991 in Berkeley, California and is now celebrated officially in more than 100 cities as well as college campuses. However it was first proposed to the UN in 1977, at the United Nations International Conference on Discrimination against Indigenous Populations in the Americas.

(New Mexico also happens to be the home state of Representative Deb Haaland, who in 2018 became one of the first two Native American women elected to Congress, along with Representative Sharice Davids of Kansas. As you may know, in 2021 the New Mexico Congresswoman became US Secretary Deb Haaland, overseeing the US Department of the Interior. This makes her the first ever Native American to be a Cabinet-level secretary.)

History.com states that Indigenous Peoples Day “is part of a movement to recognize the atrocities Columbus committed [enslaving and killing Native Americans] while also highlighting the history and contributions of Native peoples.” And as we talk to our kids about our history vis a vis the Native community, it’s important that we include those aspects that are celebratory as well as those that are pretty difficult but just as important.

Related: 7 Thanksgiving books for kids written from the Native perspective

Why are people rejecting Columbus Day?

Gillian Brockwell’s article in the Washington Post offers a disturbing account of some of the atrocities committed. by Columbus, based in part on Howard Zinn’s excellent A People’s History of the United States.

“[Columbus and his men] ordered all Taíno people 14 and older to deliver a certain amount of gold dust every three months. If they didn’t, their hands would be cut off.

At this point, the Taíno were refusing to grow crops, and those who didn’t bleed to death after their hands were removed began to die of famine and disease. When they fled into the mountains, they were hunted down by dogs. Many killed themselves with cassava poison.

Columbus’s men also continued to sexually abuse Taíno women and girls. In 1500, Columbus wrote to an acquaintance that “there are many dealers who go about looking for girls; those from nine to 10 are now in demand.”

Brutal. But not the most graphic of descriptions in her article.

Columbus also brought smallpox, measles, typhoid and the flu from Europe, which “decimated” as many as 95% of the Native American population within a century or so after 1492. according to Michael S Rosenwald’s WaPo article.

This all said, I’d be remiss if I didn’t mention that Columbus Day has become a celebration of Italian-American culture for a lot of people, with Columbus himself becoming nearly incidental.

If that’s how you see things, then at least know this: those of us who were raised with the phrase “Columbus discovered America” need to evolve. Especially now that we are now aware how wrong it is to claim that someone “discovered” anyplace where millions of people already lived for generations. 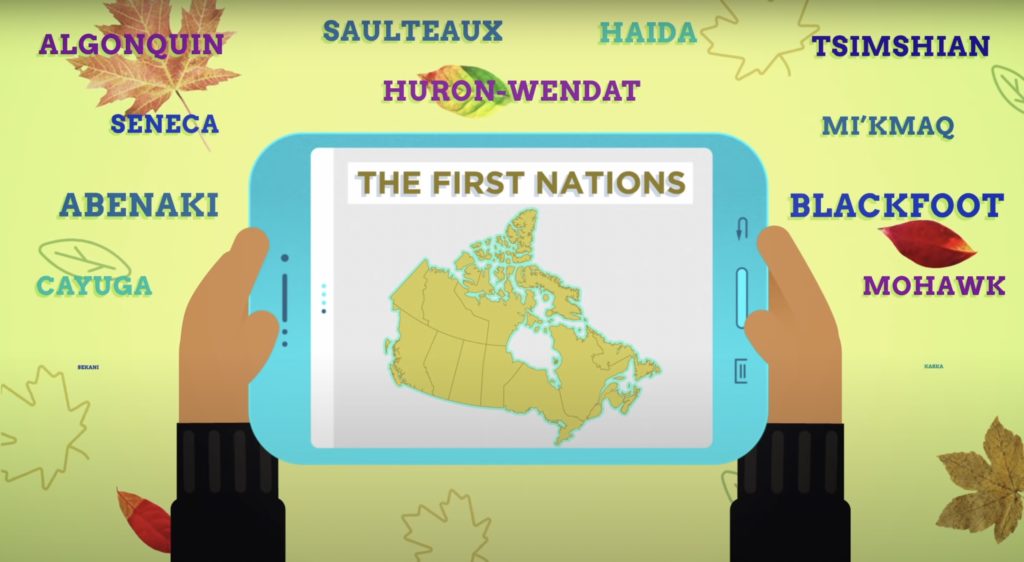 Today is a great oppportunity to dive into Native History with your kids, considering they may not be learning about it in school.

According to Pawnee member and IllumiNative CEO Chrystal Echo Hawk in an editorial in Indian Country Today, “87 percent of history books in the U.S. portray Native Americans as a population existing [only] before 1900…for many Americans, we no longer exist.”

These sites and resources can help fix that: 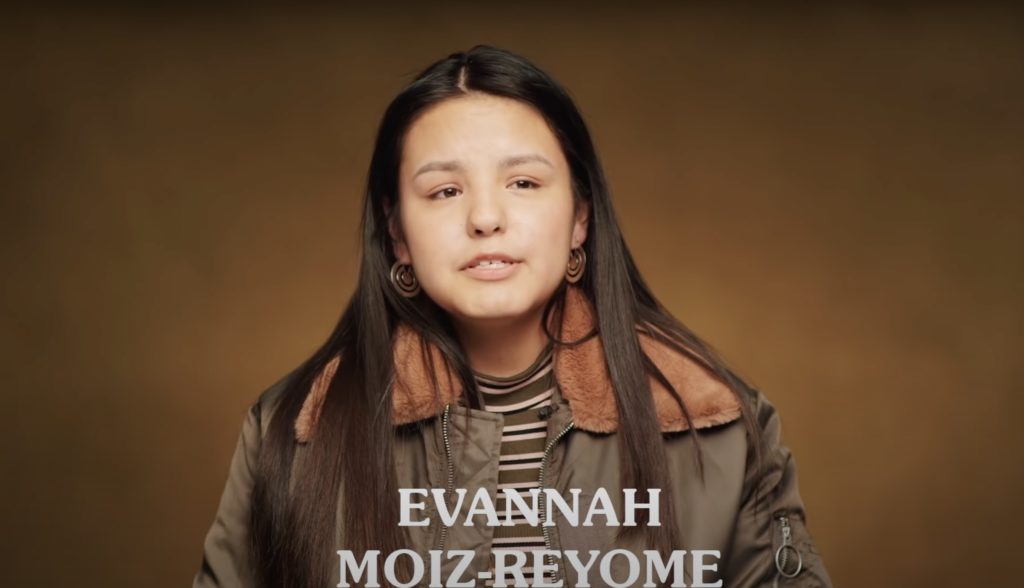 If you want to start with a definition of the term, kids will like this CBC animated video explaining the word Indigenous (above). The CBC for Kids website also offers plenty of fun videos, games and resources just for kids. (Note that Canadians celebrate National Indigenous People’s Day in June.)

2. The National Museum of the American Indian

The National Museum of the American Indian, in both New York City and Washington DC, are must-visits. Their website is also full of information, media, and artwork to help bring the stories to life for kids.

Check out this excellent list of 7 Thanksgiving books for kids written from the Native perspective, including Squanto’s Journey: The Story of the First Thanksgiving by Joseph Bruchac. Another great option: The People Shall Continue, which Kate called a conversation-starting epic history of Native people for kids.

For younger kids, check out Stolen Words (shown at very top), which is Melanie Florence and Gabrielle Grimand’s lovely, beautifully illustrated picture book about a Cree Native and his granddaughter reclaiming their language together.

You can also find articles on recommended and not-recommended children’s books via the long-running American Indians in Children’s Literature blog.

Here’s a list of a collection of culturally and historically accurate Thanksgiving coloring pages for children that we shared several years ago. 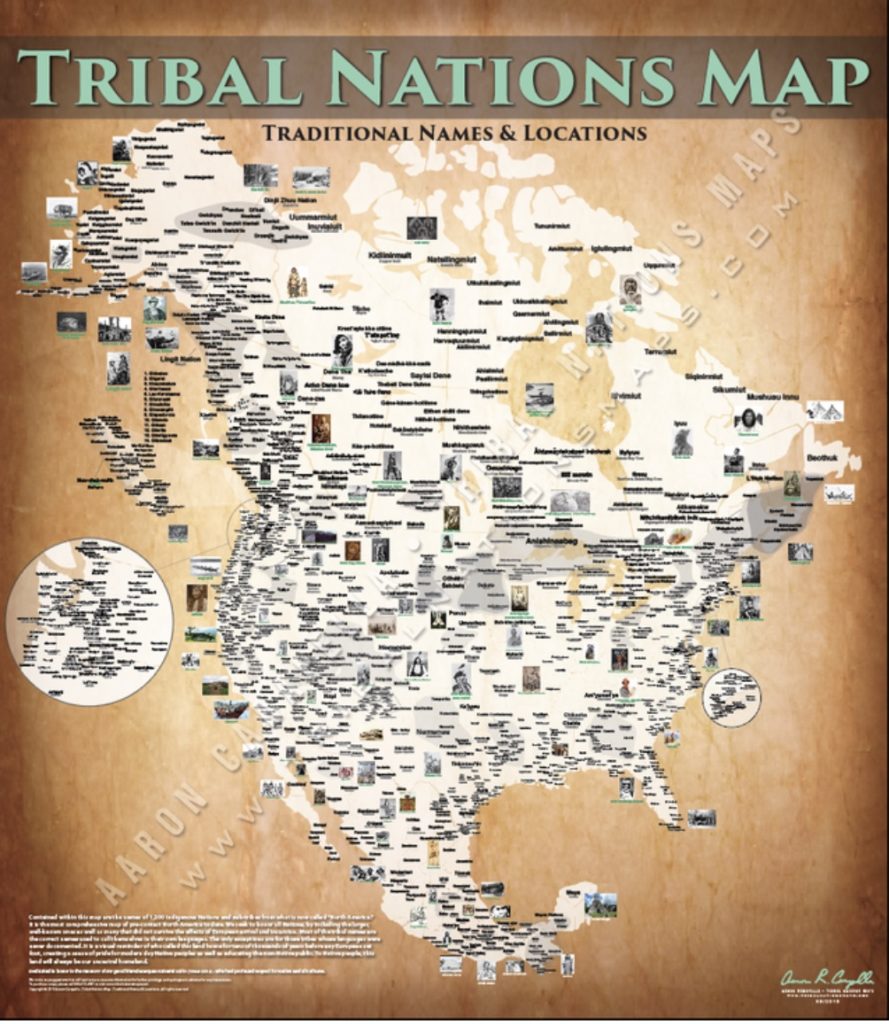 The Tribal Nations Map created by Aaron Carapella will be fascinating to kids — and is available for purchase, supporting a Native-owned business. Learn more about it from this NPR article.

.You can also find your own town through this online, interactive Native land map of North America. It’s amazing.

The Reclaiming Native Truth Project website aims to counter discrimination, invisibility and false narratives about Native Americans, and to create more inclusion, social justice, and equal opportunities. It has lots of links to great resources. 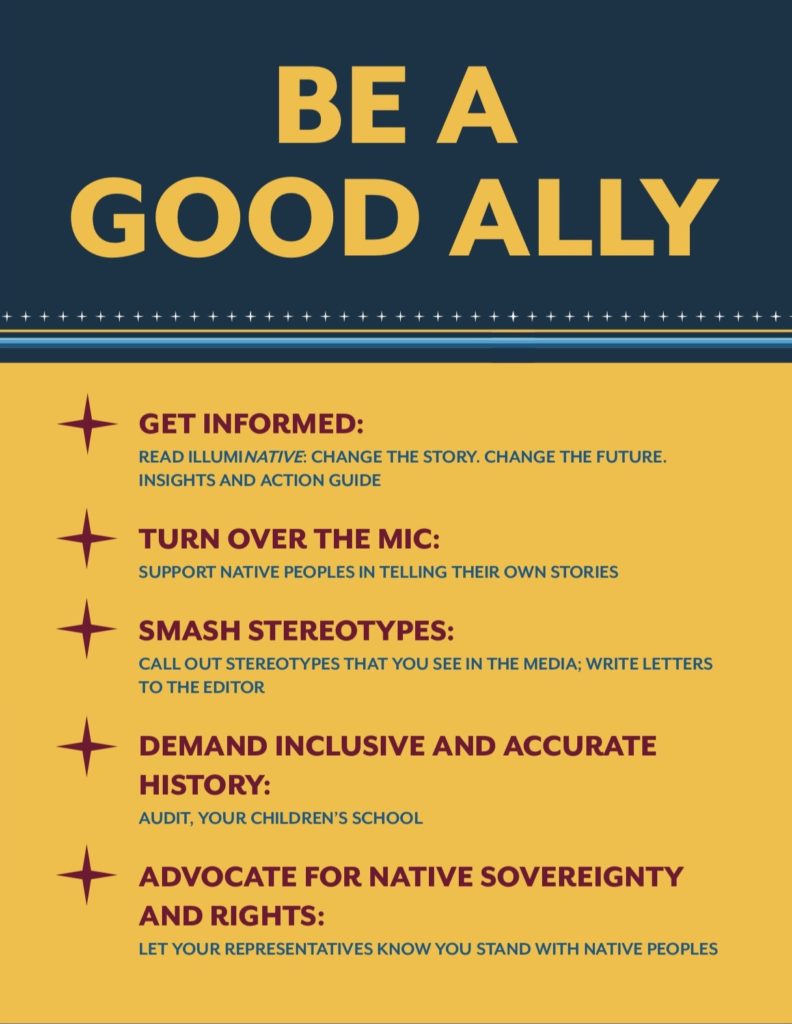 Jordan Klepper’s Comedy Central docuseries, Invisible Nation, includes a much acclaimed episode about the impact of invisibility on contemporary Native Americans. (Requires a cable sign-in.) To accompany it, check out the comprehensive Klepper’s Viewer’s Guide (PDF) via IllumiNative, which includes the checklist, above, on how to be a good ally.

The SPLC provides a helpful list of primary source texts of Native Peoples’ experiences for educators (though note that some links are outdated), and they can can also be helpful for parents.