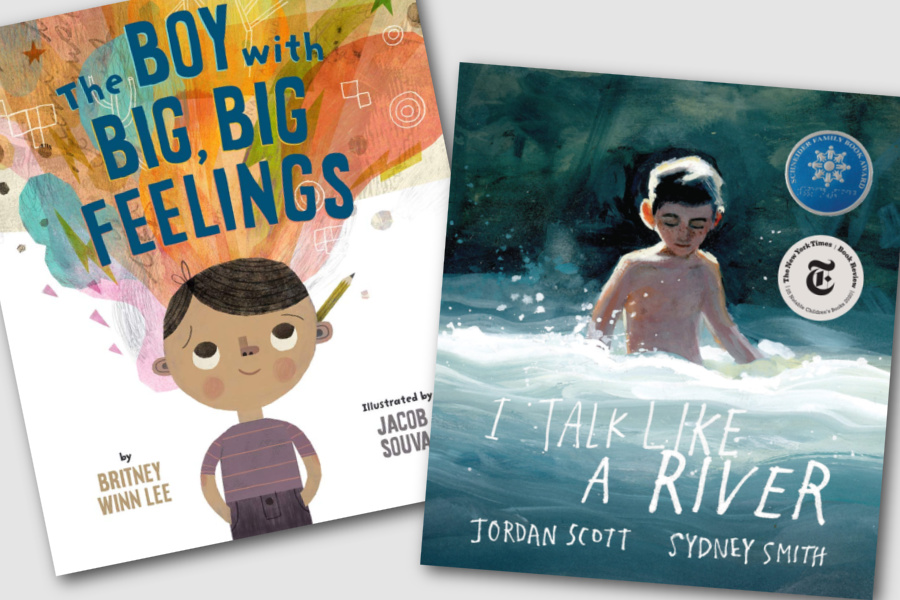 And as the mom of a daughter with autism and as a children’s book lover, I’ve wanted to highlight some incredible children’s books about neurodiversity that represent kids just like her.

If you’re a frequent reader here, you know it’s always been important for us to share diverse representation in children’s books. Children’s books are still dominated by protagonists who are male — and overall, white. So over the years, we’ve shared books that honor and recognize the achievements of Asian Americans, Hispanic heritage, Black Americans, books featuring LGBTQ main characters, as well as stories about religious celebrations that may not be celebrated by the majority of Americans.

It matters so much that all kids see themselves represented in the books they read — and that goes for neurodiverse kids too.

Of course while our own special kids love seeing children like themselves in children’s books about neurodiversity or featuring neurodiverse characters, these books are also incredible resources for teachers or parents who are trying to build empathy and compassion in all children. 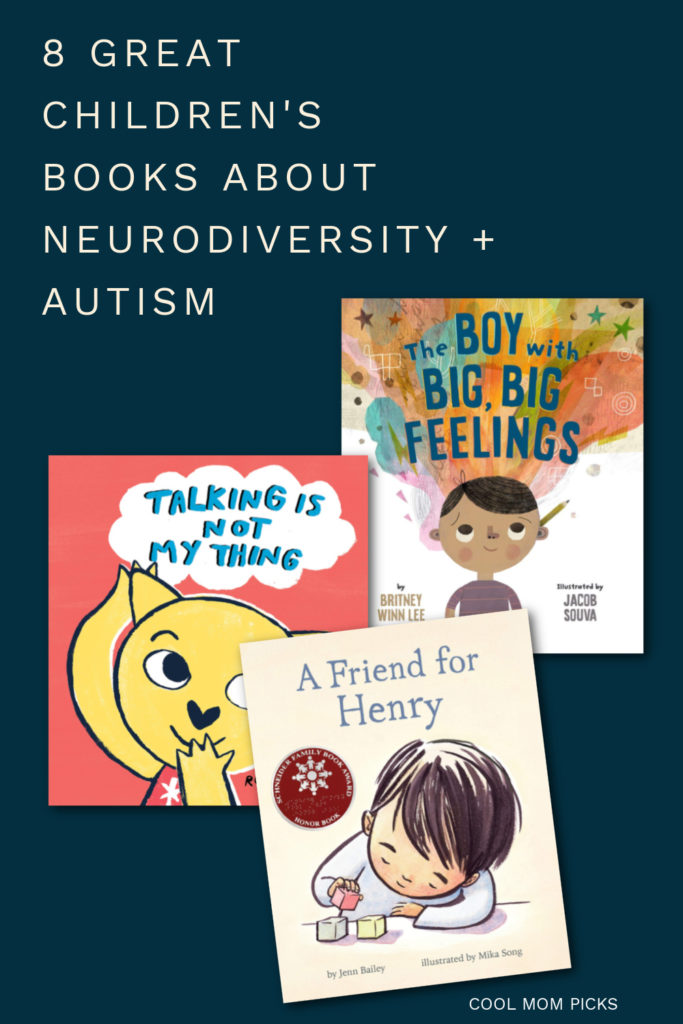 I actually found a lot of new-to-me books while doing research for my list of children’s books about neurodiversity,  but I’ve chosen to highlight my favorite for each of a variety of neurological differences — sensory processing disorders, nonverbal/apraxia, dyspraxia, emotional regulation, autism, stuttering, and stimming (or, using stimulation like flapping to calm your nervous system).

Certainly I’m not covering the entire spectrum of neurodiversity with these children’s books, but this list is a terrific place to start.

On Sensory Processing: Don’t Hug Doug (He Doesn’t Like It) 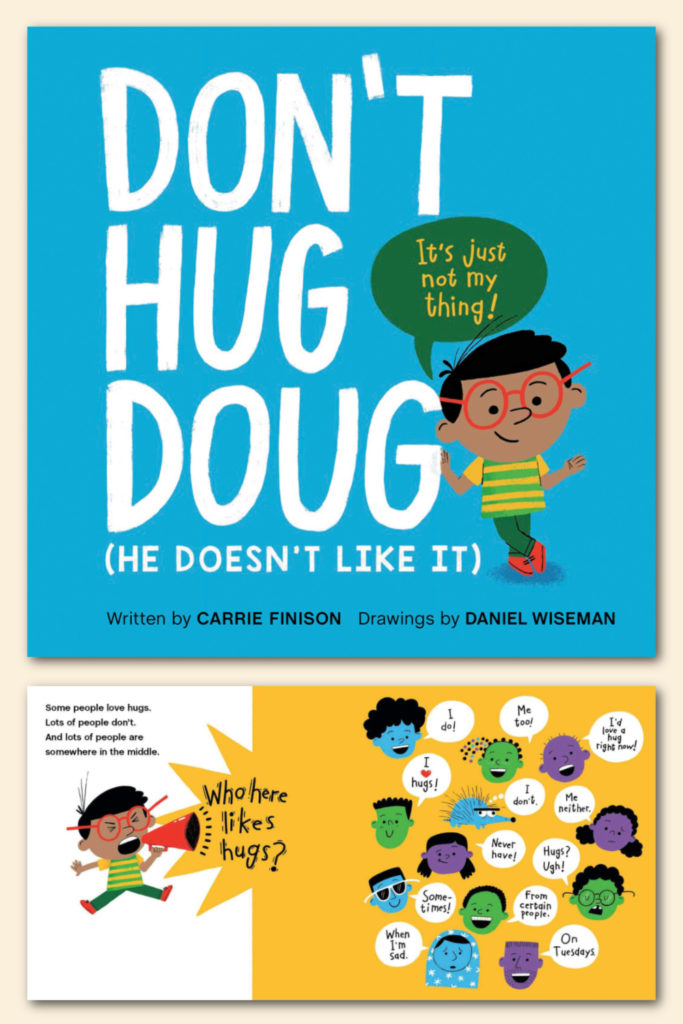 Kids with sensory processing issues will really relate with Don’t Hug Doug (He Doesn’t Like It) by Carrie Finison and Daniel Wiseman (Amazon or Bookshop). This book share’s Doug’s perspective—a hard pass on hugs—in a positive and upbeat tone that’s really affirming. Kids without sensory issues also get some straightforward but friendly advice: if you aren’t sure whether someone wants to be touched, just ask!

(Note: This book is also good for help any young child learn about the concept of consent in an age-appropriate way.)

On Stuttering and Apraxia: I Talk Like a River 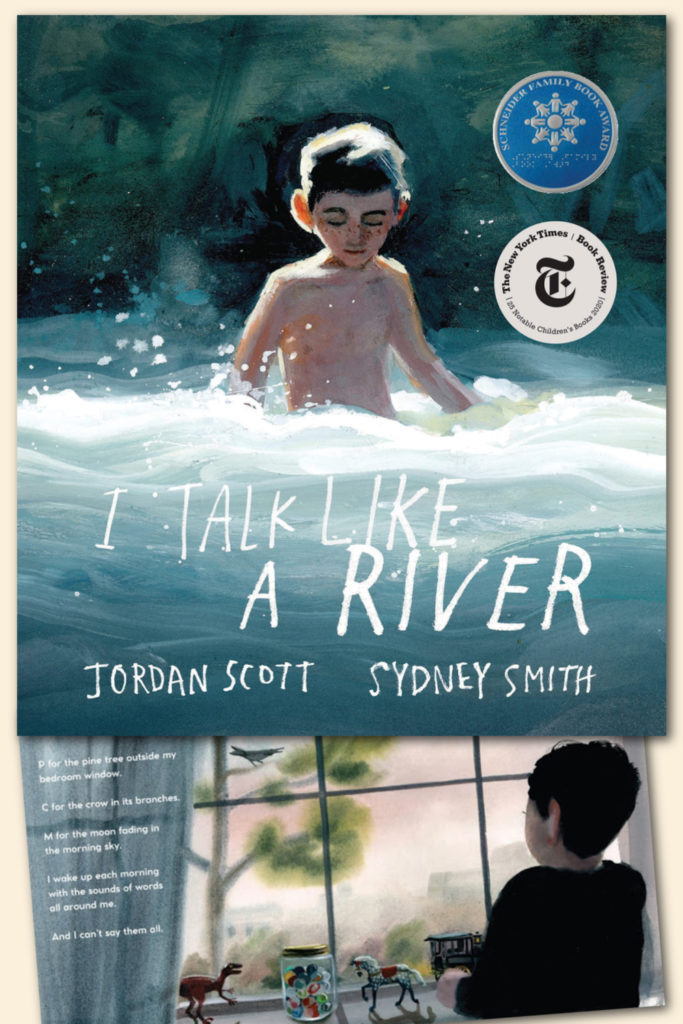 We included I Talk Like a River by Jordan Scott and Sydney Smith (Amazon and Bookshop) in our post on the best books of 2020,  thanks to the many recognitions it received when it was published. Scott’s book is is a stunning, poetic description of what it’s like to experience a stutter, told with overwhelming compassion and dignity. Whether your kid stutters or they know someone who is nonverbal, has apraxia, or speaks with a stutter, this book is a beautiful opportunity to talk about communication differences,  and the importance of having patience while friends sort out what they’re trying to say.

On Non-Verbal Communication: Talking is Not My Thing 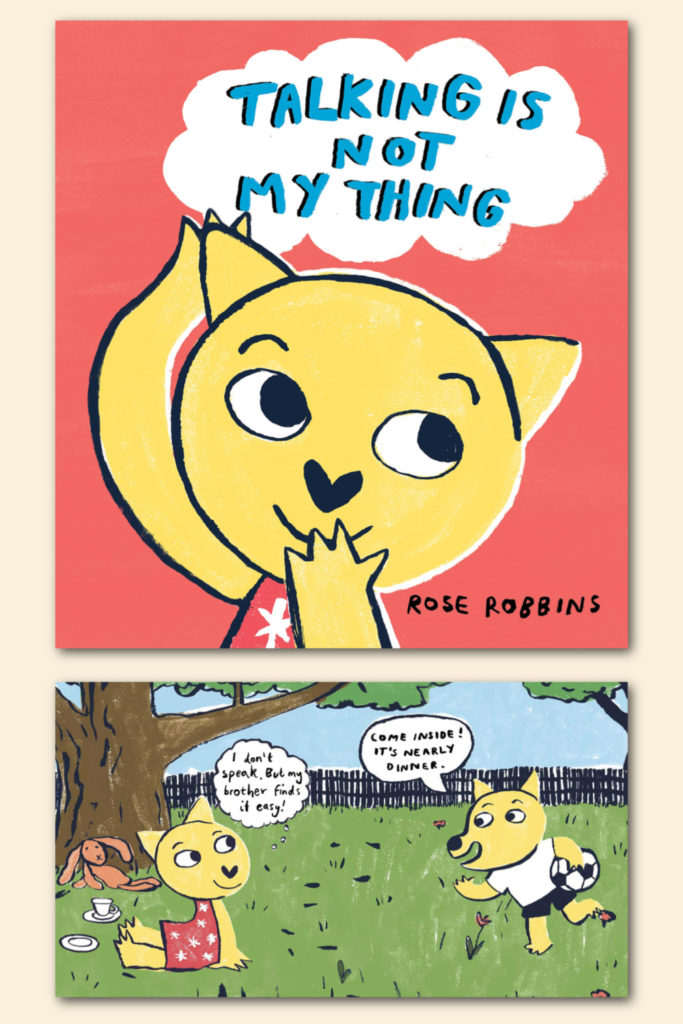 Kids who are non-verbal communicate in their own ways with friends and family, and Talking Is Not My Thing by Rose Robbins (Amazon and Bookshop) is a joyful celebration of how one little sister connects with others throughout her day. The book is a great tool to promote understanding, and it introduces verbal kids to the concept of AAC, or using tools like flashcards to communicate instead of speaking.

As a mom of a daughter who communicates this way, I love seeing her own special needs represented in a fun, upbeat way. It’s also nice to see a female character represented, since so many of the books we’ve found feature boys.

On Dyspraxia: You’re So Clumsy Charley 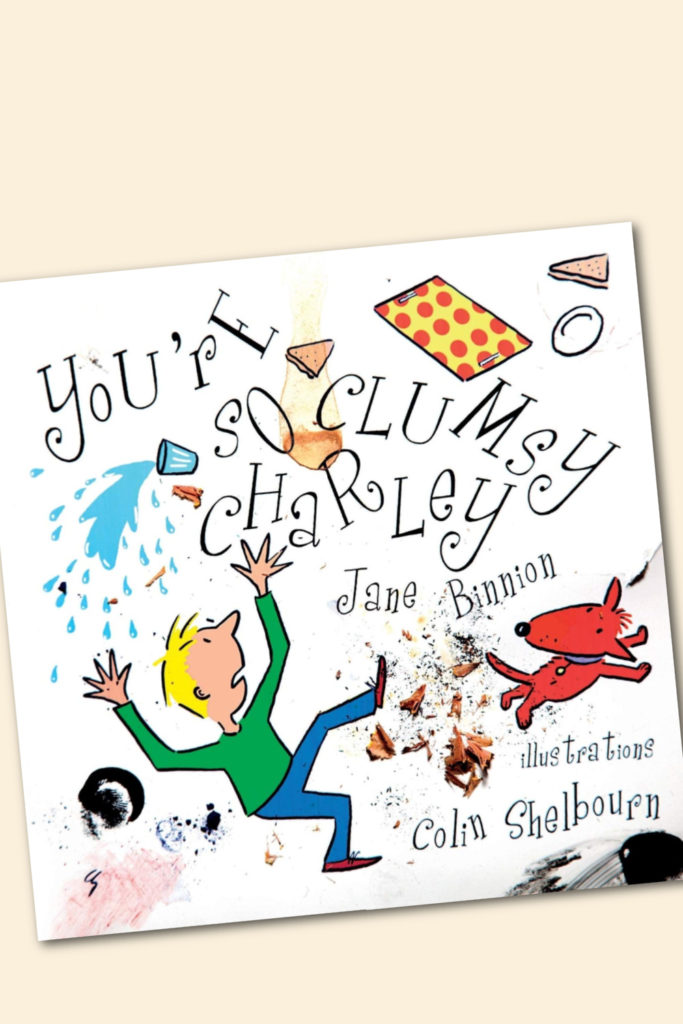 Kids who experience dyspraxia have a hard time recognizing where they are in space, so they may trip, bump into walls, or struggle with hand-eye coordination. It’s one of those “invisible” special needs, which is why the book You’re So Clumsy Charley is so helpful — and in fact author Jane Binnion has dyspraxia herself. If your child has a classmate who’s unusually “clumsy,” or if they have dyspraxia, this will go a long way toward helping them feel understood, thanks in part to Colin Shelbourn’s fun illustrations.

On Emotional Regulation: The Boy with Big, Big Feelings 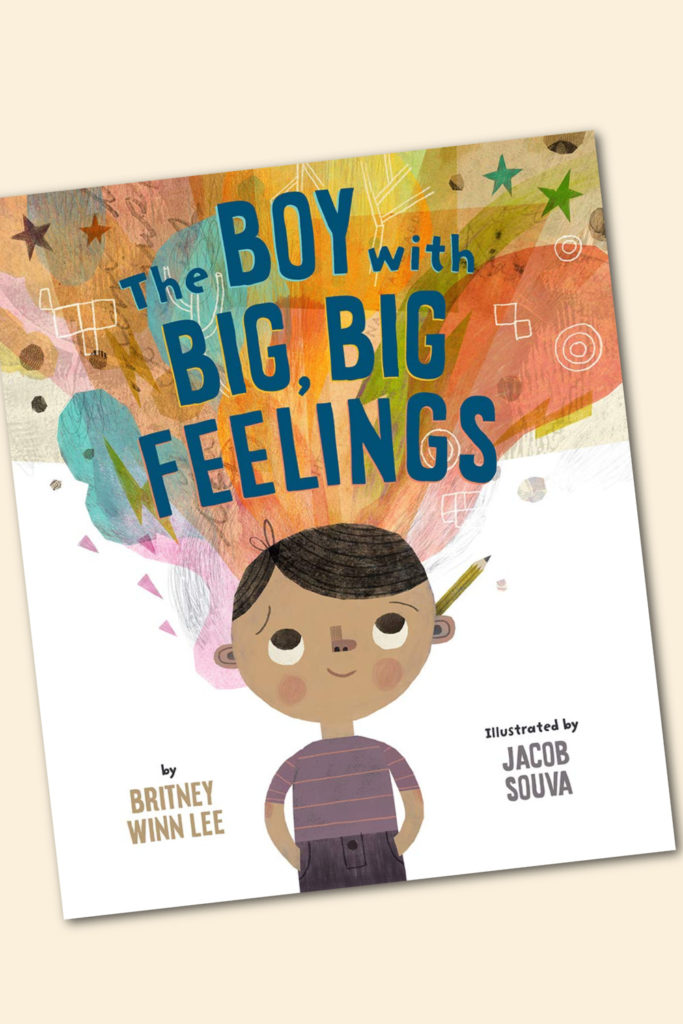 In examining children’s books about neurodiversity, I wanted to include something on emotional regulation, which can be really hard for some kids with ASD. The special book The Boy with Big, Big Feelings by Britney Winn Lee and Jacob Souva (Amazon and Bookshop) focuses on this aspect of autism in such a tender way. We see this boy’s emotions spill out on the page—literally spilling from his body in swarths of color—from reactions to loud noises to empathy for a friend.

I especially love that this particular book features a boy as the main character, which is important for helping all boys –and not just those with ASD —  see that expressing emotions in a healthy way is a good, good thing.

On Autism from a Sibling’s Perspective: My Brother Otto 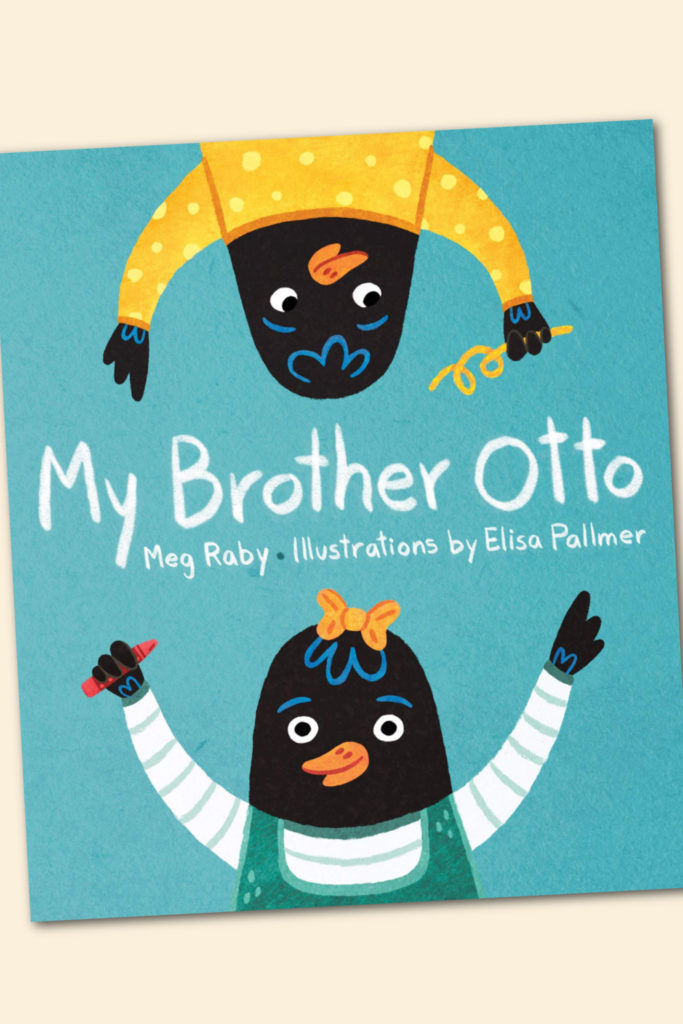 Certainly autism presents itself in a number of ways. But one wonderful book to consider is My Brother Otto by Meg Raby and Elisa Pallmer (Amazon and Bookshop). In it, a sister tells the reader about her brother, Otto, who is autistic. It’s a sweet look at their close sibling relationship, while Raby still honestly acknowledges some of the characteristics that make kids with autism unique—like Otto’s fixation with the color yellow, for example. By the end, you see that Otto is a kid who loves to play and have fun, just like his sister.

On Social Skills and Autism: A Friend for Henry

Even some children’s books might be too much, too bright, and too busy for kids with highly sensitive systems. But A Friend for Henry by Jean Bailey (Amazon and Bookshop) is a warm, calm story, thanks in large part to Mika Song’s beautiful, spacious illustrations. Henry has autism, and he’s looking for a friend in his too-loud, too-close classroom. Then he finds a classmate who listens, who shares, and who even likes things to stay in order too, it’s a heartfelt celebration of compassion and acceptance in category of children’s books about neuro-diversity. And the illustrations are just beautiful.

On Neurotypical Behavior…From a Different Perspective:
Why Johnny Doesn’t Flap 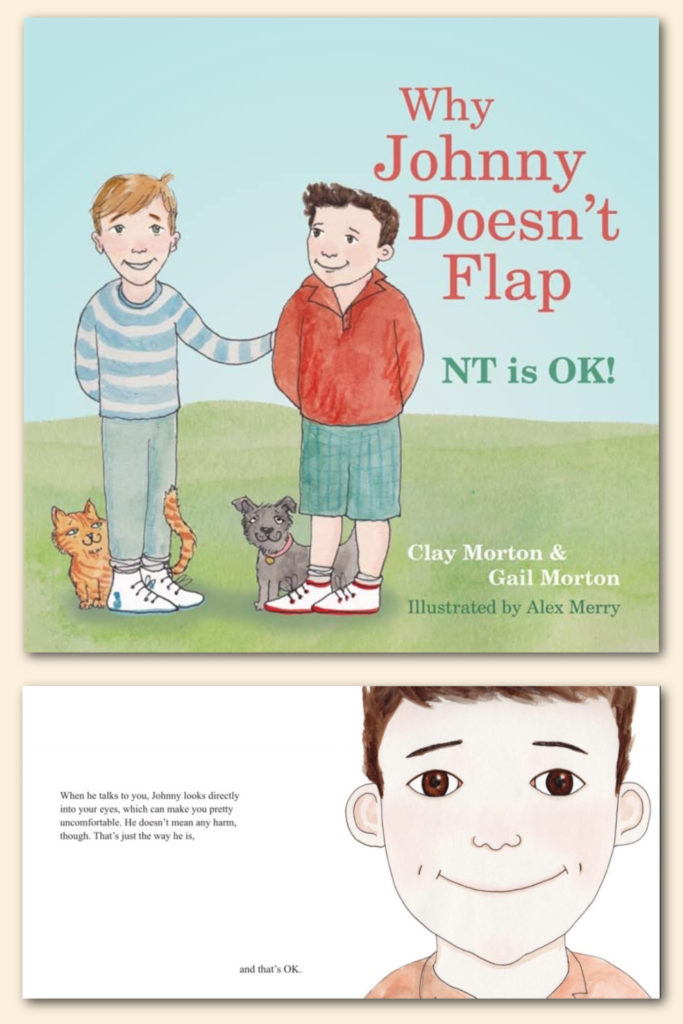 As the mom of a kid with autism, I have such strong feelings about Why Johnny Doesn’t Flap by Clay Morton and Gail Morton, with illustrations by Alex Merry (Amazon and Bookshop). Every kid should read this book! It’s wonderfully special, because it’s narrated by a child with autism who explains to the reader that his neurotypical friend Johnny is okay, even though he does all these quirky things—like, he doesn’t flap to calm his nerves. Or he might arrive at 3:58 when he said he was coming at 4:00. Or he says that math test was a “piece of cake,” even though it had nothing to do with cake.

It’s such a tender look inside the way someone with autism may think, and the kind of children’s book about neurodiversity that really demonstrates in a clever way that my “normal” isn’t “normal” for everyone.