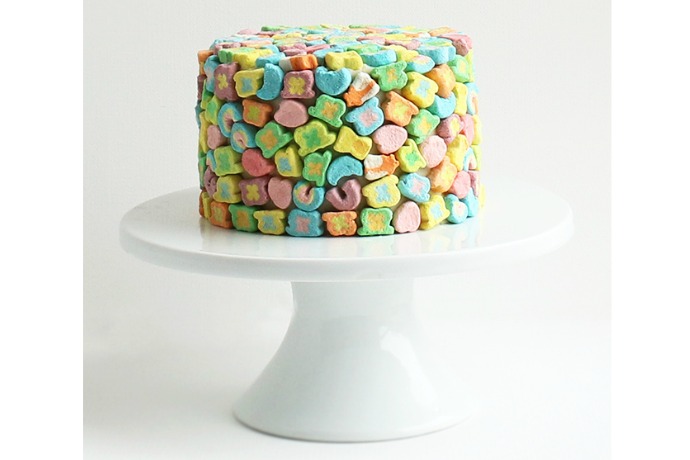 I will not get into the ingredient list on Lucky Charms cereal because, well. Yeah. But, hey, no judgments. I’m not one of those no-sugar-ever-moms. And once in a while, for a special occasion like, say, St. Patrick’s Day, I can totally see how putting those little colorful rainbow marshmallows to use in creative Lucky Charms dessert recipes is indeed, magically delicious for all involved.

I will be totally honest, I spent a lot of time looking around and beyond the fun Lucky Charms treats we found a few years ago, most Lucky Charms desserts I found look kind of gross to me. Keep in mind they’re so sweet, you don’t need to mix them with raw chocolate cake mix or gobs of Nutella or melted green Peeps to make something fun. However these four desserts stood out to me as being really clever and not particularly complicated.

Lazy mom tip: Of course you can always sprinkle them over cupcakes, pudding, a bowl of ice cream or frozen yogurt, or a cup of hot chocolate.

As long as you’re whipping something up with marshmallows anyway, why not pop in a few from the Lucky Charms cereal box, as in this homemade Lucky Charms treat recipe from Sweet C Designs. You can follow her easy recipe, which is basically marshmallows + the contents of the cereal box; or if you’re like me, and think that might be a little (or a lot) sweet for you, make your own Rice Krispy treats the standard way.  Then toss in a bunch of the Lucky Charms marshmallows just to add rainbow color and fun to it. My kids would flip out if these ended up in their lunch box on St. Pat’s.

You might think of it as a parfait, but Chelsea of Chelsea’s Messy Apron calls them St Patrick’s Day Pudding Trifles and I think it’s so smart and easy. However I might take the time to make real whipped cream because it’s so easy to do, and one of those things I tend not to shortcut with store-bought, because I just like the taste of real cream and sugar better. You can also keep it simple by alternating layers of pudding, whipped cream, and those marshmallows. Even so, this is a really cool little dessert for the kids, and Chelsea’s idea to rim the glasses with colorful sprinkles is a inspired final touch.

This DIY Lucky Charms cake recipe is like every kid’s fake-marshmallow-loving dream. Isn’t it gorgeous? Alana Jonesmann has some seriously awesome little tips and hacks for the recipe in her tutorial, but of course you can always cheat (like I would) and get a store-bought cake, then just cover the top or sides with those crunchy, crazy marshmallows. If you’re really short on time? Or people to eat finish it so you don’t have to? Cupcakes work too.

If you’ve got a fondness for those DQ Blizzards, Kristy of Sweet Treats & More put together a fun recipe for a Lucky Charms Blizzard. I know my kids would love this, because it’s basically a souped-up milkshake. Guaranteed they’d be asking for this one long after March is over.

Oh and here’s one tip: Even though it’s getting late for St Patrick’s day treats, if you want to make Lucky Charms desserts for a rainbow themed birthday party or any other occasion, you can buy rainbow marshmallows in bulk. (And Chow says the site is totally legit, despite the look of it.)

Ironically, they come from a company called Discount Herbals — which is may be a reminder to plan a little detox after all this rainbow marshmallow eating.

You can also find cereal marshmallows from nuts.com in a one-pound or 20-pound bag. Thanks to eagle-eye reader Nancy for the tip.