6 of the best YouTube hair tutorials for girls that you can actually do. Even if you’re not Ken Paves. 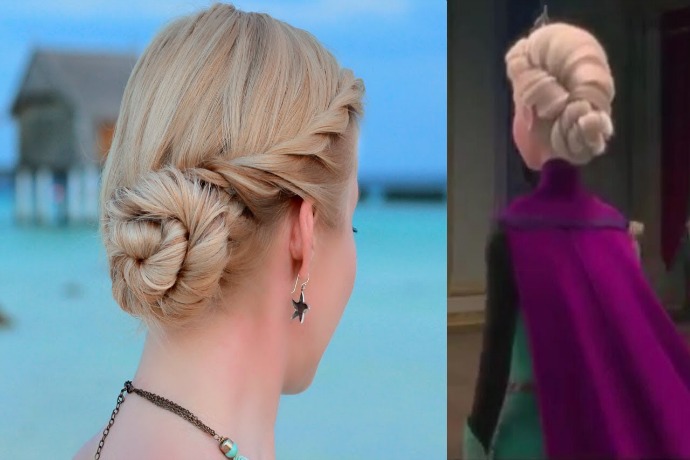 With three girls in my house, I’ve got an awful lot of hair to brush and style, and with the holidays almost here, I’ve been wanting to change up from the usual hairband. It’s true you’ll find no shortage of YouTube hair tutorials, but after watching hundreds of videos (not even kidding you), I found that most of them were really hard to follow, were way too complicated and advanced, or didn’t offer up styles that were great for little girls.

No sexy loose curls for my 10-year old, thank you very much.

Plus, I don’t have the time or budget to run out and buy all sorts of hair gadgets and products. I’d much rather be able to use what I already have in my home.

So after many hours, I narrowed it down to the 6 best YouTube hair tutorials that I think work for little girls. They are styles that you can actually do, even if the only thing you’re able to do right now is pull your daughter’s bangs back with a barrette. They are all great for the holidays, or really any day. And the best part? They all take under 5 minutes–maybe even quicker once you get the hang of it.

Your daughter will definitely need long hair for this French Twist into Rope Braid tutorial, which was the only tutorial I liked that was actually done on a little girl. While it does help if you know how to French braid because the concept is very similar, it’s certainly not necessary. This style is pretty easy to execute but looks like it took you a long time.

I just love the way this Dutch side braid looks, working beautifully on natural ethnic hair, though I imagine it could work well on caucasian hair too. If you’re not familiar with the Dutch braid, it’s just an inverted French braid. But if you don’t, don’t worry. This particular video gives one of the best Dutch braid tutorials (or inverted French braid) that I found on YouTube.

These four headband braids are super easy, can be done on long or short hair, and even on you, mamas, if you’re growing out your bangs. The video contains four separate headband braid video tutorials, including a half French braid technique that I never even knew existed.

I just love the way a fishtail braid looks and surprise, it’s really not as hard to do as you might think. This particular fishtail hair tutorial is really easy to follow and takes less than a minute to execute. Plus, it can be worn half up or in a pony tail. The final result is so pretty.

I cannot tell you how many waterfall French braid tutorials I watched until I found this one. While the video quality isn’t as clear as some of the other tutorials out there, you’ll see why it has so many views; she does a fabulous job of showing you how to execute this particular technique, especially if you’ve never done a French braid before.

You will find tons of Elsa coronation hair tutorials on YouTube, but most of them require a lot of hair tools, hair spray, and even back combing, along with some intricate hair braiding and twisting techniques. This tutorial is super simple, and just requires a band and a few bobby pins to hold the bun in place. Keep in mind, she does add extensions to her own hair to do this look, but that’s obviously not necessary, although you’ll definitely need long hair to make this work best.

Want to add a few hair accessories to your little girl’s holiday hairstyle? Check our archives!