Move over cronut, we’ve got 5 epic dessert recipe mashups you can make at home 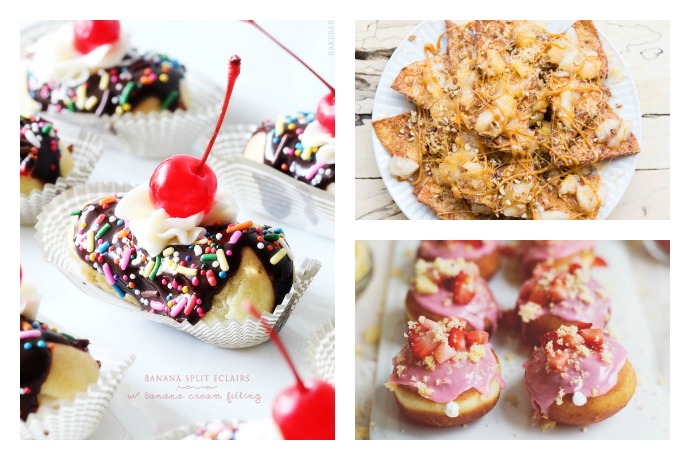 The cronut, a dessert made by frying croissant dough like a donut, set off a nationwide phenomenon in 2013, when Time magazine also named Dominique Ansel‘s creation one of the best inventions of the year. Having had one, I can tell you that the cronut is worthy of the hype and also totally impossible to recreate at home. These five dessert recipe mashups, on the other hand, are equally epic. And you can actually make them. (Yes, you!)

All you need is a sweet tooth, some baking gumption, and a lot of sugar. Butter, too.

It may not be the easiest recipe in the world, but it always amazes me that little more than flour, sugar, milk, and vanilla can be turned into something as glorious as these Strawberry Shortcake Donuts from A Beautiful Mess. Make these on a cold or rainy day when you plan to be inside with the kids. They can help and it’s so worth the effort.

Here’s another involved recipe, but you didn’t think that we could take on the esteemed cronut creator with no effort, did you? Anyway, I’m willing to bet that some of you are willing to put in the work to yield the results of these exquisite Banana Split Eclairs from Baker’s Royale. If you’re not among the willing, take a look at these anyway: we should at least know that they exist.

Alright, here goes: Hi, I’m Stacie, a (mostly) healthy food blogger and I love sugary cereals. I’ve stopped buying them to protect my children from the same affliction, but am going to have to make an exception to whip up these Cinnamon Toast Crunch Coffee Cake Bites from Spoon Fork Bacon. The recipe is simple and straightforward, as cakes go, so who’s in with me? It’s the blend of two of my very favorite desserts. (Oh, don’t tell me you’ve never stuck an arm in a cereal box and eaten it that way too.)

If the idea of dessert nachos sounds weird, or even gross, to you, these Apple Pie Nachos found at Thrillist will change your mind. I mean, what can be wrong with cinnamon sugar coated tortilla chips (mmm, old Taco Bell dessert memories….-Eds.) topped with apple pie filling, caramel sauce, and vanilla ice cream? Nothing. It’s like something you’d find as a deconstructed dessert dish in a fancy restaurant. If it still sounds bad, something can only be wrong with you. Kidding. (Sort of.)

These Rice Krispie Treat Pancakes from Half Baked Harvest aren’t technically a dessert, but they’re too epic not to share. Did I mention that they’re served with browned butter syrup? Plus, we all need a good dessert-for-breakfast recipe in our back pocket. This is mine.

Oh, and if you’re looking for the original Cronut recipe?  It’s right here. But unless you’re in possession of a stand mixer with special attachments, various ring cutters, a deep fryer, and a pastry degree from FCI, it’s probably not worth it to attempt it. However you can swipe the mini-recipes for gourmet glazes and sugars, for sprinkling on your own homemade donuts.

Happy #hamilton Day! We are going to be in the roo