14 wildly cool, creative sibling Halloween costumes to inspire you beyond superheroes and princesses. 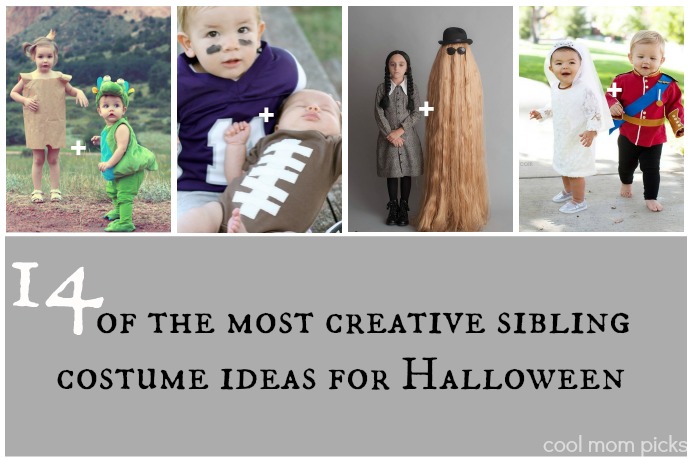 It may not be fair — or the best system — but I admit I give out a little more candy to the kids who come to my door in creative and clever themed Halloween costumes. And when they’re cool sibling Halloween costumes that work together, well I kind of want to toss in some extra Reese’s just for the parents who took the time to get it together.

Since my kids haven’t decided what to be yet, I’ve been doing some searching (and by some, I mean hours and hours) for the coolest, smartest sibling Halloween costumes around, and coming up with a few of my own ideas, should you want something that stands out amongst the throngs of animated movie princesses and superheroes that will fill every neighborhood on the 31st.

I hope these ideas will give you some awesome inspiration this Halloween for your own kids!

Related: 25 of the most adorably creative DIY baby costumes that you can actually make

Got twins? Siblings? BFF babies with the neighbor down the hall? This baby sushi costume at Etsy shop My Little Mookie is amazing, although we probably won’t tote our kids around on wooden platters all night. Pair it with the matching Soy Sauce baby Halloween costume. which you may have to make a custom request for from The Costume Cafe’s Etsy shop. (It was so popular it sold out!) Maybe you can even figure out how to go as a pair of chopsticks with your significant other?

If Star Wars fever has hit your house as hard as it’s hit mine, you’ll probably have some Lukes and Leias trick-or-treating this year. If you’re crafty, you can follow this Princess Leia Halloween costume tutorial on Melly Sews that’s pretty impressive. But the one who will steal the show is this adorable R2D2 baby costume via Smallbites by Rittar. I mean, how cute is that? I also found a handmade knit R2D2 baby hat from For You and Me Designs on Etsy and you don’t need much more than that and a white swaddle blanket.

Related: 11 of the absolute best homemade kids’ Halloween costumes we saw this year

This baby Prince costume that we spotted last year on College Humor is one of our favorite things ever. Hysterical. For the full effect, send a second child holding a purple rain cloud over her head like this one you can order from the Sewn Natural shop on Etsy. Or just attach a felt cut-out easily to a hat.

We also found an entire purple rain cloud costume that you can DIY.

And if you have a third child, send him or her out as a dove by using a simple pair of white wings that you may already have in a costume closet. (We also love the gorgeous custom white dove costume wings at BHB Kid Style.) Don’t forget a tiny teardrop painted down one cheek!

Dr. Who and a Weeping Angel Halloween Costume

The 11th Doctor is still my favorite Doctor Who character, and this Doctor Who Halloween costume for kids by Reese Dixon, with the Tardis-hack for her own child’s wheelchair, is amazing. Mom of the year award!To get the same effect, check out her site for some great ideas for the costume. I even found an affordable sonic screwdriver with a flashlight at Amazon.

And this surprisingly simple Weeping Angel Halloween costume by Charly Giordano on Imgur makes a great companion. Just be sure to stock up on all the gray body paint you can find. Oh, and don’t look away once she’s dressed. You know what could happen.

We expect to see a lot of emojis this year, and these emoji Halloween costumes for kids at Hello Wonderful are my favorite, because they’re so so easy. In fact, your kids could make these themselves. If you’re hitting a Halloween party or trick-or-treating in a busy neighborhood and think the cardboard will be too awkward, have them decorate yellow t-shirts instead with Sharpies.

Related: How to throw an Emoji themed party: The ultimate roundup of seriously awesome snacks, invitations, activities + other ideas.

One of our favorite children’s books is The Paper Bag Princess, which would make a more refreshing costume idea than the other princesses you’re likely to see flooding your neighborhood on the 31st. So I’m loving this Paper Bag Princess and her Dragon costume spotted at Seeker of Happiness. I found a cute dragon costume at Target (though it’s not cheap), and you can’t get much easier than the paper bag dress for your princess. Here’s hoping for warm weather on Halloween, or just layer a long-sleeve shirt underneath without ruining the look. She’s got some other fantastic ideas for book character costume ideas on the blog so definitely take a look!

Airplane and a Cloud Halloween Costume

If your kids are fascinated by the Wright brothers or Amelia Earhart, or maybe they just like things that go, this DIY airplane costume for kids on Oh Happy Day is perfect, although it’s not exactly from the Homemade Costumes 101 catalog. (Jordan’s ideas are always so impressive every year, aren’t thhey?) While it does take more effort to create (and lots and lots of glue), I love how easy it is for parents or siblings to float alongside the plane in Jordan’s fluffy cloud Halloween costume. Plus, that plane looks like it has some great spots for hiding candy.

This clever football player and his football sibling Halloween costumes at The Macs is a great way to let your little sports enthusiast be his or her favorite athlete, and even a baby can get in on the action. Of course, you could adapt the idea for a basketball, soccer, or baseball player with the right stitching on the onesie for the baby. Alternately, if the “ball” is a little older, you can cut a hole in a football or basketball piñata and use it as a hat.

Related: Super easy last-minute Halloween costumes for kids that you can make in 10 minutes or less..

How totally cool is this Wednesday Addams and Cousin It sibling Halloween costume idea by Melissa at Costume Works?  If your kid already has a pair of Doc Martens (or order them from Zappos) you’re in luck, and the dress can go right back in the closet. I love dressing my kids in Halloween costumes they might actually wear again — but I’d go ahead and say the 5-inch Crystal Gayle-length wig you’ll need for Cousin It is probably a one-and-done purchase.

Everyone’s seen Little Red Riding Hood out trick-or-treating with that big bad wolf, so I love the idea of mixing it up a bit — instead, send her out with a picnic basket or a sandwich!  I’d definitely recommend the handmade Little Red Riding Hood costume from Lover Dovers Club on Etsy. (How cute is that hood!) I found the fun DIY picnic basket costume for babies at Costume Pop.

If your child’s a bit older, follow this DIY Sandwich costume tutorial on Parenting, so they can actually walk around. And if cutting out foam cushion inserts is too much work, there’s always posterboard cut like bread.

If you’ve got more than a few kids, I am begging one of you to please please try this fun Minivan stick figure costume from Costume Works. Whether because you actually love them or it’s an ironic homage, this is one easy, last-minute costume for those of you like me who procrastinate until the last minute.

We are all super Studio Ghibli animation fans around here and if you are too, and you’re crafty, check out the fun sewing pattern for this adorable baby baby Totoro costume at You and Mie. Or you could hack it with a gray sweatshirt with some fleece added to it. Big and little Totoros together would be really cute, but I also love the idea of letting Totoro collect candy with some Soot Sprites. These at Deviant Art don’t look like they’d be too hard to DIY.

One shortcut: Try starting with an M&Ms costume covered in black fur fabric, then add eyes and black tights.  We like shortcuts.

For another alternative to the tried and true princess costume idea, how about giving a nod to the real royals with these adorable Prince William and Princess Kate Halloween costumes, captured by photographer Gina Lee (h/t Buzzfeed).  For Kate, you just need a simple white lace dress, easily found at a consignment shop or even Target, and look for a pair of cute silver baby shoes for your little Kate on Zappos or even a place like H&M. (Bonus: They will definitely be worn again!) For baby William, visit your local craft store for some buttons or felt to embellish a red t-shirt or jacket.

We know that spending tons of time on a DIY costume that your child tears off in the first ten minutes because it’s uncomfortable is the worst. Nothing like finding simple, comfy solutions that are still cool enough to score some extra candy. Especially when we’re the ones who get to eat it.