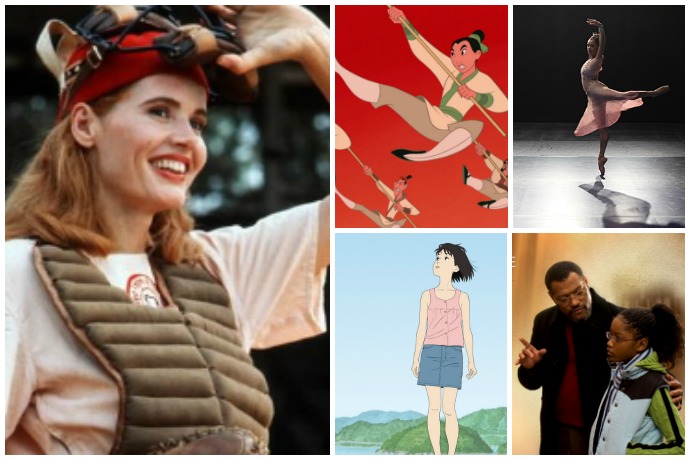 Having two girls, I am definitely hyperaware of their increased interest in a film when it has a strong female lead. That said, when they’re with their male friends, and they’re trying to pick a movie to watch together, I realize how rare it is for some of the kids to be aware of movies beyond the usual big blockbusters. I really think it’s important for all kids to see girls and women in positions of power in the media they watch — whether that means fighting crime, protecting a family, solving a mystery, or just getting through life.

I mean, as much as I love Bringing Up Baby (and my kids did too), it’s hard to explain why Kate Hepburn’s heiress character is so ditzy. We’ve come a long way, baby.

So after going through the top streaming channels for some of my favorite girl power films with strong female leads to add to my own queue, I thought it would be helpful for a lot of you, too, if I listed them here.

Because there’s more out there than Hunger Games and The Force Awakens…or Frozen.

Our review of DreamWorks’ Home when it was first released gives you the lowdown on this terrific animated film which is really a road trip/unlikely buddy movie about a girl and an alien. It’s rated for ages 2–7 but I loved it as much as my kids did.

This is a favorite in our house — an emotional, powerful story about a gifted sixth-grade girl grappling with academic achievement in an environment where it feels “not cool.” The stakes are raised when Lawrence Fishburne, as a college English professor begins to mentor her to compete in a spelling bee beyond her own school. If you haven’t seen it, the plot admittedly sounds kind of after school special-ish, but it’s truly compelling and exciting without being preachy or pat. Plus, Angela Bassett.

This Japanese anime fairy tale doesn’t have the sensibility of any animated US film you’ve ever seen and yet my girls loved this story of a young girl trying to find peace in a small new town after her father’s death. Her unlikely allies turn out to be three goblins that only she can see. They’re a little creepy looking at first, but my kids grew to really love them.

Related: Why you shouldn’t miss Ponyo or Hayao Miyazaki’s other family classics

A League of Their Own (Netflix)

Yes there’s some cursing, and Tom Hanks’ character is pretty crass. But tweens and older kids will love this story of WWII era women’s baseball league. It opens up amazing conversations about women and careers, choices, sisterhood, loyalty, and why the heck they were forced to wear skirts and lipstick. Just be prepared for them to start saying, “there’s no crying in _______” for the rest of their lives.

If you haven’t seen Tim Burton’s update, it’s notable for its wonderful bookends of Alice in the real world, learning that she doesn’t have to dream of being the submissive society wife that she’s expected to be. Plus, you know, she takes on the Jabberwocky like a boss.

Mulan is like the underrated Disney “princess” who doesn’t appear on the diapers or soap dispensers, and it’s likely that a lot of kids have missed this one. China’s legendary warrior who impersonates a man to serve in the military is a pretty bad-ass heroine in her own right, even if she does marry the prince.

Don’t even tell your kids that it’s a documentary if that word scares them off. I think fans of dance will love this inspiring story about Misty Copeland’s rise to become the first African-American principal dancer in the ABT. Or hey, maybe it will make them fans of dance, because it’s hard to take your eyes off of her.

It’s PG-13 so decide if you’re okay with some drinking, canoodling, and (in my opinion) pretty mild cursing. But my kids were entranced by this charming film about single mom Juliette Binoche who brings her family’s chocolate recipe and a little bit of magic to an isolated post-war French village. Judi Dench and Lena Olin turn in some great performances too as two different kind of strong women. Just FYI Common Sense Media gives it an 11+ rating, but my then 7 and 9-year-olds really liked it.

Don’t laugh, all ye cynical film critics! I saw this movie ages ago and it surprised me with how watchable it happens to be. It’s a decent story with a great female lead in Abby Breslin, and offers up some great teaching opportunities around topics like the Great Depression, working women, and having kindness and strength in the face of adversity.

If the news cycle and the pandemic and just well L