The best bug sprays for Zika virus protection and how to apply them safely. Because we’d like to panic as little as possible about our kids, thanks. 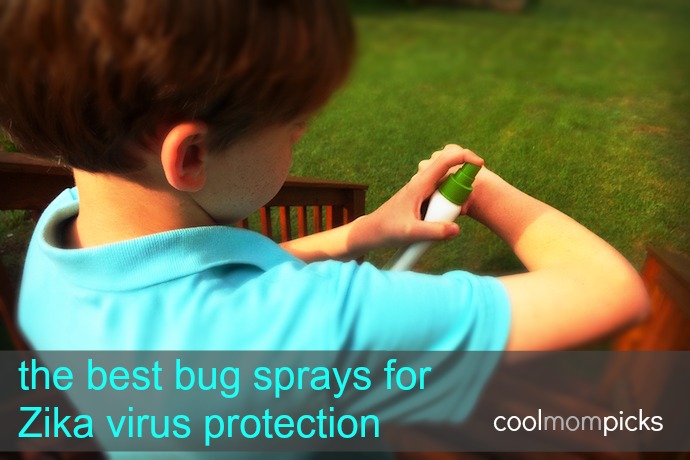 This year, the Zika virus is on my mind (and everyone else’s, I imagine) so I’ve been avidly researching the best bug sprays for Zika virus protection. It happens that my daughter is extremely allergic to mosquito bites, so when she goes outside in the summertime, I make sure she’s covered head to toe in insect repellent — and for extra precaution, she wears one of those wristband mosquito repellents too.

So you can see that this is an issue for me.

Do Non-Toxic Bug Sprays work against the Zika virus?

Because she wears so much spray, I prefer to go non-toxic whenever possible. I have a bucket by the back door filled with bottles of Babyganics Natural Insect Repellent, Erbaviva Organic Buzz Spray, and California Baby SPF 30+ Sunscreen Citronella Bug Blend, which is a brilliant mashup of sunscreen and bug repellent.

However with Zika making me extra nervous, I wasn’t sure my go-to brands would cut it. So, I checked with the EWG — my go-to resource for the best non-toxic beauty brands out there — and read their recent guide to bug repellents.

Turns out, it’s not great news for Zika-worriers like myself: essential oil blends, which is what most non-toxic bug sprays are made of, are not effective against the Aedes mosquitos that carry the Zika virus.

To be clear, the non-toxic bug sprays weren’t listed in the “less effective” category.

They’re in the “not effective” category.

Related: The EWG list of the safest sunscreens for kids

So, until the CDC figures out Zika and we have some real solutions on how to treat it, I’m going to go with the lesser of two evils this year and follow the EWG’s recommendations to use bug repellents with at least 20% Picaridin, 7–30% DEET, or 20% IR3535.

(Although, I should note that Consumer Reports said that the sprays with IR3535 didn’t pass their own tests, so I opted not to include any here. We stick with Picaridin and DEET-based bug sprays instead.)

Yes, I know, we’ve always heard that DEET is the worst for our kids. I’ve avoided it too. But what surprised me is the EWG claim that it’s “widely used with few serious adverse reactions.” So, this year I’m thinking some limited exposure to DEET might be better than risking Zika in me or my kids.

If you are going that route, know that products with 30% DEET are found to be just as effective as those with higher concentrations, so stick with 30% or lower. (As with SPF, sometimes you hit a max and going higher only provides more chemicals, not more protection.)

The best, safest way to apply

If you decide to go the DEET route too, make it as safe as possible by never spraying it on your kids’ hands — or around their faces for that matter. Instead, spray your bug spray for Zika protection on your hands and rub it onto their exposed skin, avoiding eyes, ears, and around the mouth (obviously).

However, according to both the AAP and CDC, don’t DEET it at all on infants younger than 2 months old.

If you are taking your newborn outside for a while (and I hope you do!) use a car seat mosquito net or one made for their stroller’s bassinet attachment instead.

Then rest easy, because parenting can be hard, whatever the mosquitos are doing this summer.

Our picks for the best bug sprays for Zika virus protection

With all that knowledge in hand, I dove in to do some research to determine which brands, in particular, are best for staving off the Aedes mosquitos that carry the Zika virus, and I actually found a handful of safer repellents that do contain the EWG’s recommended ingredients to be effective.

Here’s the complete list of the products I’ll personally be choosing for my own family this year for various situations. Be sure to read the disclaimers on these bug sprays for Zika prevention carefully though, because not all of them meet every single recommended standard. If you tend to prefer DEET-free or non-toxic sprays, you may have some tough choices to make.

The “Fisherman’s Formula” spray from Sawyer was ranked as the best safe bug spray for Zika protection by both Time magazine and Consumer Reports, and I have no hesitations about it. I like that it’s DEET-free — and I bet other parents will too. Instead it contains 20% Picaridin, which some rank as more effective than even DEET. This spray is proven to work up to 8 hours against Aedes mosquitos, as well as against ticks and Culex mosquitos, which carry West Nile Virus. Good stuff. (Update: We previously referred to this as a “natural” bug spray because that’s how Time has referred to it, however note that it’s actually a synthetic compound that mimics natural solutions. More on Picaridin here.)

This is one of the safest ways to use DEET that I’ve found, thanks to a water-based formula that isn’t absorbed much by your skin. I would definitely prefer using the wipes on my children rather than the aerosol spray version, which can more easily get into eyes or be inhaled by everyone within spraying distance. The effectiveness of the wipes is reported to last up to 8 hours and repel ticks too. Double whammy, because West Nile is still a concern for a lot of us in certain regions. UPDATE 6/25/17: Just note that kids should not apply these wipes themselves (because, DEET), and parents should wash their hands well after application.

For years now, it’s been one of those secrets that Avon’s Skin-So-Soft works inadvertently as a non-toxic mosquito repellent. And for some of us, it definitely does. Well, now they’ve made it official with their pump spray that includes Picaridin, as well as packs of Avon Skin-So-Soft Bug Guard + Picaridin wipes. Please note however that the Picaridin level is only at 10% in their formula — which is half of the EWG’s 20% recommendation. It’s not the strongest protection against Zika specifically, but it is reportedly effective against those Zika-carrying Aedes mosquitos for up to 3 hours. The downside of that is that you’ll need to reapply more often. But on the plus side? No DEET. Plus, it has Vitamin E and aloe, so your skin will be (ahem) so soft.

Repel’s top-recommended spray for Zika protection is actually a plant-based spray with oil of Lemon Eucalyptus as its active ingredient. Now this falls into the “less effective” category according to the EWG, but I wanted to include it as a good all-natural, DEET-free option for parents avoiding DEET, especially because it should keep Aedes mosquitos away for a full 7 hours.

Just note that the CDC recommends not using oil of lemon eucalyptus on kids younger than 3 years old, so if you’re a parent of toddlers, please check out one of the other choices. Fortunately, we’ve got a few.

Now go have fun out there!