Ideas for an awesome LEGO Batman Movie party theme, with inspiration from the Hollywood premiere party 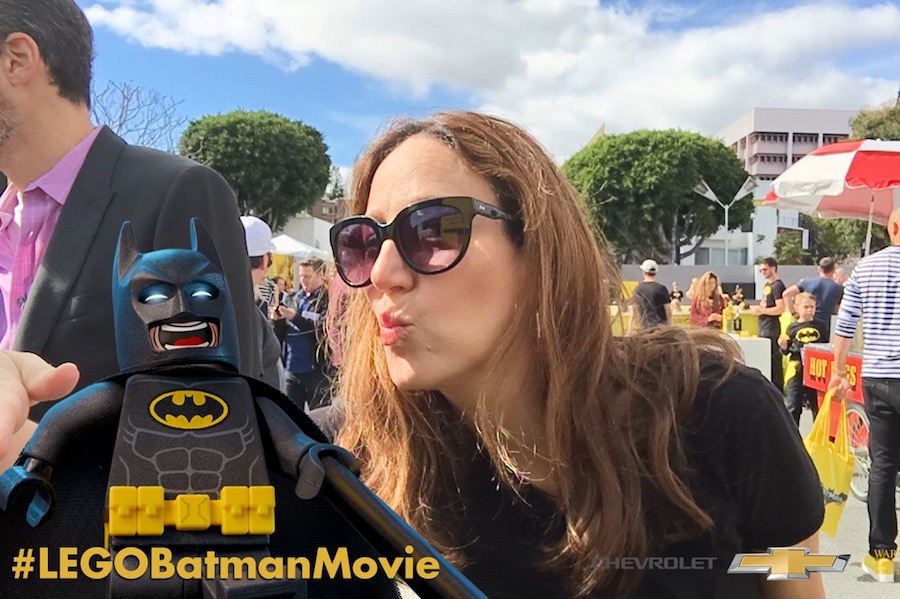 Thanks to our awesome partner Warner Bros. Pictures, I had the opportunity to jet out to LA this past weekend (wow, did I need that) for the launch party and red carpet — okay, black and yellow carpet — premiere of The LEGO Batman Movie.

If you’ve got a kid who’s obsessed — and trust me, after your kids see it, they will be — I gathered some fantastic ideas for throwing a creative, memorable LEGO Batman themed party.

And by gathered, I mean I have shamelessly stolen them from the studio’s brilliant party planners. But you know, I adapted them. Because, presumably none of us have the same budget as Warner Bros. when it comes to our kids’ birthday parties.

Though you’re not going to construct an entire archway out of LEGO bricks (no, not even you, you uber Pinterest moms), you can hang a big The LEGO Batman Movie poster over the front door or print a publicity still from the movie.

Also, roll out a yellow carpet for your guests — extra points for yellow and black.

Pictures or it didn’t happen, amirite? Even at kids’ birthday parties.

If you’re thinking about photo ops or photo booth ideas for a The LEGO Batman Movie themed party, there was no shortage of inspiration at the premiere party:

B. Life-size LEGO Batman model at the party entrance. (Moderately spendy but maybe you can find an inflatable.)

C. A cool forced-perspective iPhone setup which creates the illusion that you’re on the same plane as the little LEGO Batman minifig — even though you’re actually behind him. You can see the setup and result here which is super creative. (Not-so-spendy but requires lots of tech savvy.)

As you can see with my daughter, D works just fine and lets you spend more money on oh…say, cupcakes. But I’ll get to that.

At the party, the walls were made to look like LEGO bricks, with a spray paint–style of illustration for each of the characters.

Alternatively, just hit the official site to download free printable The LEGO Batman Movie posters, which look great and are pretty hilarious. Just print them out large and cover your walls.

You could also tape them all down to a table top, making for a fun, creative, makeshift paper tablecloth.

There are endless ideas when it comes to activities, because you’ve got LEGO to drawn on, you’ve got all the superhero-themed activities, and you’ve got Hollywood. So here are just a few cool ones I saw at the premiere party.

LEGO Bricks to Play With
Each table at the party had a lucite box filled with yellow, black, and gray pieces and I really liked that kids could create whatever they wanted at all — no models, no guides to follow. Just free play, and the kids loved it. Plus, we adore when party crafts and activities double as take-home party favors.

Temporary Tattoos
Tats are always fun for kids of any age. These are modeled by our friend and fellow blogger, Charlie Capen of How to Be a Dad with his son, Finn. Not to be confused with the real tattoo that Charlie’s sporting above the temporary one.

Activity pages are always good to have on hand at any party, especially for younger kids who may need a little settle down time between a rambunctious activity and the cake.

Video Game Contests
There were video game stations everywhere and if you’re down for some screen time at your party, the kids could spend some time playing round robin–style games of the LEGO Batman video game. Nice touch: attaching minifigs to the controllers. However long that lasts.

I absolutely loved the tiered yellow stand holding cupcakes emblazoned with the Batman logo, edible LEGO bricks, and all those fun Blam and Pow comic-style exclamations.

This could also be a great activity, by the way. Consider getting all the decoratifs together without assembling. Then let kids go to town making their own super treats.

Another brilliant idea was a Dylan’s Candy Bar buffet table. There were tons of jars of candy, each one labeled along the lines of the theme.

And you can totally do this with healthier treats too:

But, get creative! I’m sure you can get red pepper strips to somehow correspond to Harley Quinn, right?

And of course…I caught Will Arnett, who voices Batman.

And hey, there he is!

But I have a feeling that your kids and their own best friends, cousins, and siblings will make for the absolute perfect VIP list.

So about The LEGO Batman Movie…

While this is not a movie review, can I just say how awesome it is? And funny? And wry? And clever? And pop culture-y? And how much I can’t wait to see it again with my kids this week? Because it is all that.

Take a sneak peek for yourself here:

Thanks so much to our sponsor Warner Bros. Pictures for sending me to the premiere!