4 times (so far) journalists have been the lifesaving heroes of the Hurricane Harvey flooding. 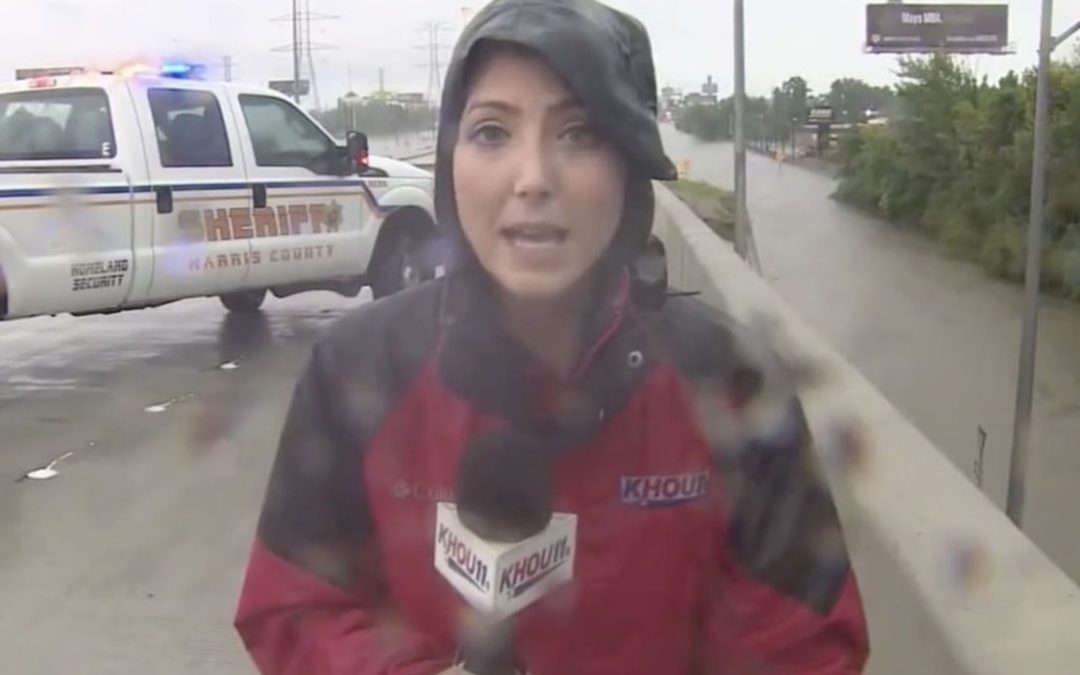 When tragedy strikes, we always try to follow Mr. Roger’s timeless advice to look for the helpers. And as Hurricane Harvey continues to batter Houston, we’ve all been so moved by the efforts of the National Guard, volunteers, emergency services crews, and regular people just doing what they can for friends, neighbors and strangers.

But the past few days we’ve all noticed an unexpected group making a major impact: Journalists.

Our journalists already serve a noble cause — bearing witness to important events,  keeping the world informed and maintaining a free press with respect to the First Amendment. But over the past few days, reporters, photographers, producers, videographers and other news crew have gone above and beyond to help Houston residents in life-saving ways.

These are just four of the stories of heroics that go beyond mere journalism, that have moved us during Hurricane Harvey. No doubt there will be many, many more. And some we may never even hear about.

Related: How to help the Houston flood victims: 20+ organizations that need you now. 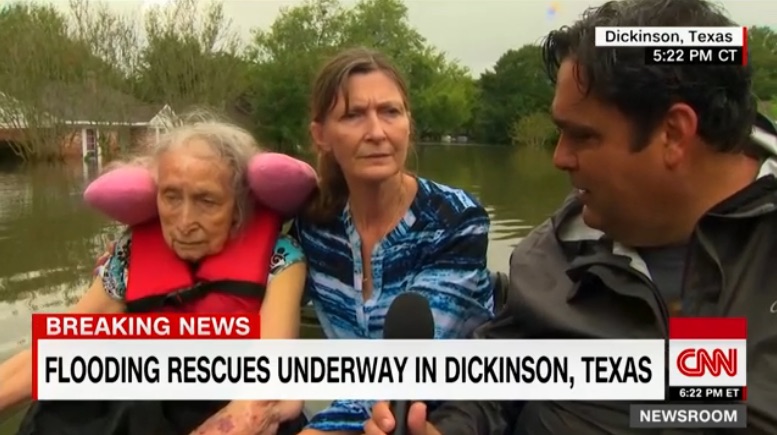 Wow, we’re blown away by the bravery in this dramatic rescue by a local volunteer accompanied by a CNN crew including reporter Ed Lavandera. The team had been searching for survivors in the flooded neighborhood and was on the verge of leaving when they heard the cries of resident Pam Jones. The crew hoisted her family into their boat, one by one, and brought them (and their dog) to safety.

But what really struck us was the poignancy of Lavandera suggesting live, on air, to his production team, that he wanted to be careful about filming Jones’s elderly mother, who was afflicted with alzheimer’s disease. It was clear he didn’t want to exploit her condition for the cameras and his humanity moved us all. 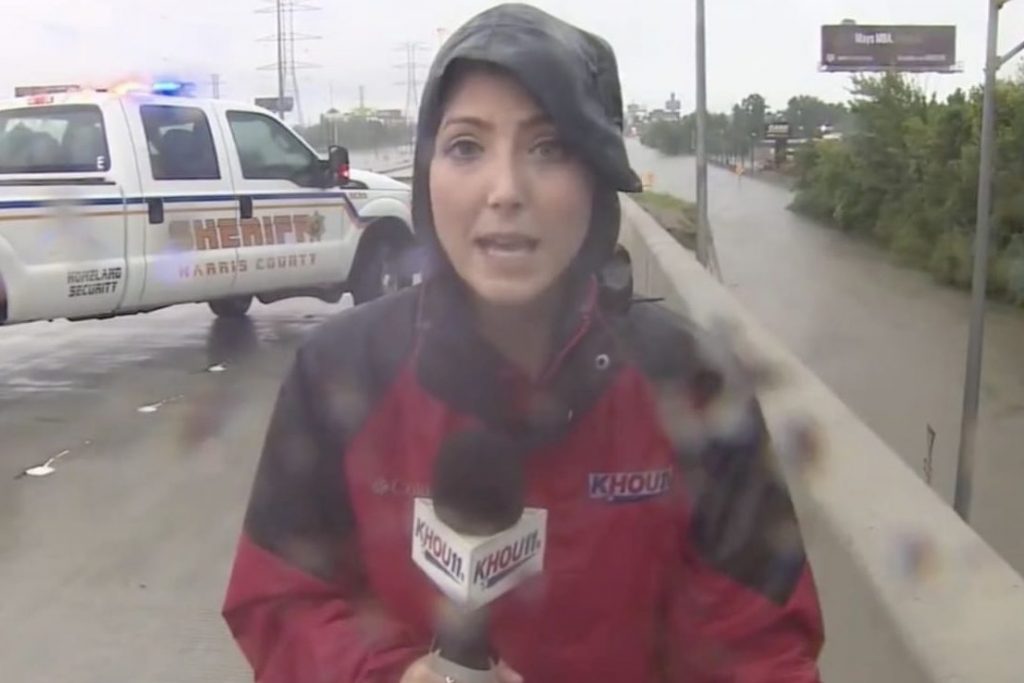 Reporter Brandi Smith’s station, KHOU, had flooded while on air, (see the final video of the station here from anchor Bill Bishop’s Twitter feed) so reporters and crew set up a makeshift set up on the second floor so they could continue to broadcast. Brandi, however, stayed in the city along with photographer Mario Sandoval, to provide coverage, even at great risk to themselves.

While reporting, Smith spotted a stranded semi-truck driver on the flooded underpass below her and waved down a passing sheriff’s vehicle that happened to be hauling a boat. You can watch the entire story including the amazing rescue on the Washington Post website. Or see the video of the truck driver’s rescue from Brandi’s Facebook page. (It’s around the 4:40 mark.) It’s amazing that she could keep her composure.

Oh and speaking the Washington Post, a big shout-out to them for removing their free article limit so that all can have access to their excellent reporting on Harvey during this emergency. Public Good > Profits 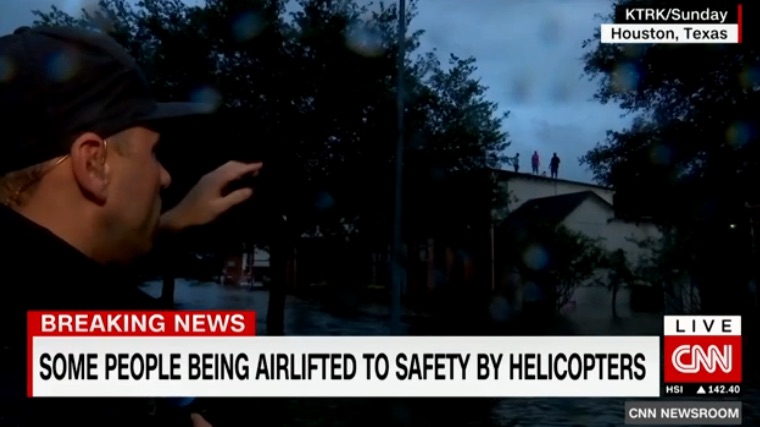 Houston ABC affiliate KTRK reporter Foti Kallergis was broadcasting from a boat when he was signaled by stranded residents from a rooftop. That’s when this incredible rooftop rescue from the Houston floods ensued. The crew helped several elderly relatives, including “two sick and disabled people and two in wheelchairs,” safely onto their boat and into a helicopter.

And not surprisingly, his first professional assignments including storm chasing hurricanes Rita and Katrina. What a pro. 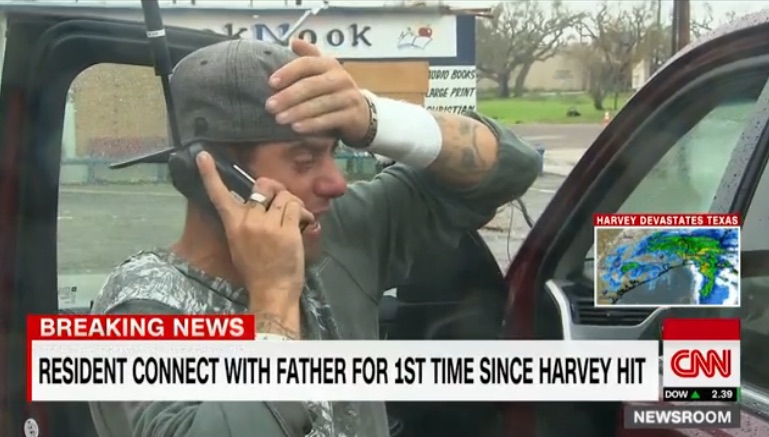 Aransas Pass resident Aaron Mitchell walked 12 miles through the night to try and find his father. He posted an emotional on-air plea to locate his father to let him know he was okay and in Rockport looking for him. Without any cell service available, the CNN crew offered their own satellite phone to help Mitchell reach his dad and form a plan to reunite.

While this reunion may not seem as heroic as a dramatic helicopter rescue, keep in mind that none of this could have happened had these reporters and news crews not been there in the first place, leaving behind their own families and the relative safety of their own homes to perform an invaluable public service.

Journalists: We are moved, and we are grateful.

Please read: How to help the Houston flood victims: 20+ organizations that need you now.