9 life lessons from Melissa McCarthy that all moms can relate to. 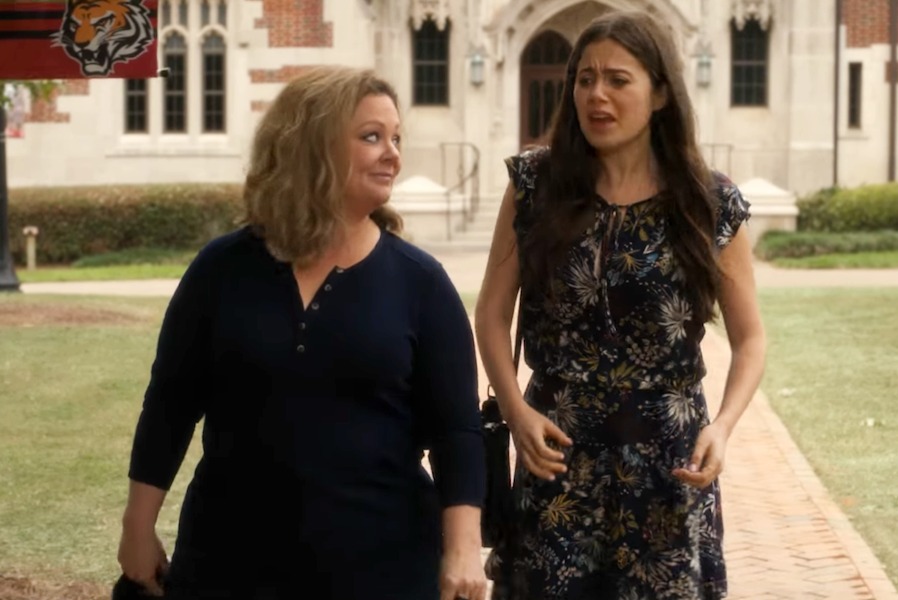 In the upcoming Life of the Party, premiering May 11, my sister from another mister, Melissa McCarthy, plays a mom who goes back to college after getting dumped by her husband. But when she lands at the same school where her daughter is a freshman, she pretty much gets a full life makeover.

Thanks to Warner Bros, Pictures, I had the opportunity to visit the set of Life of the Party last year and sit down with Melissa —  and her 80s wig, which she’s affectionately named Marla. 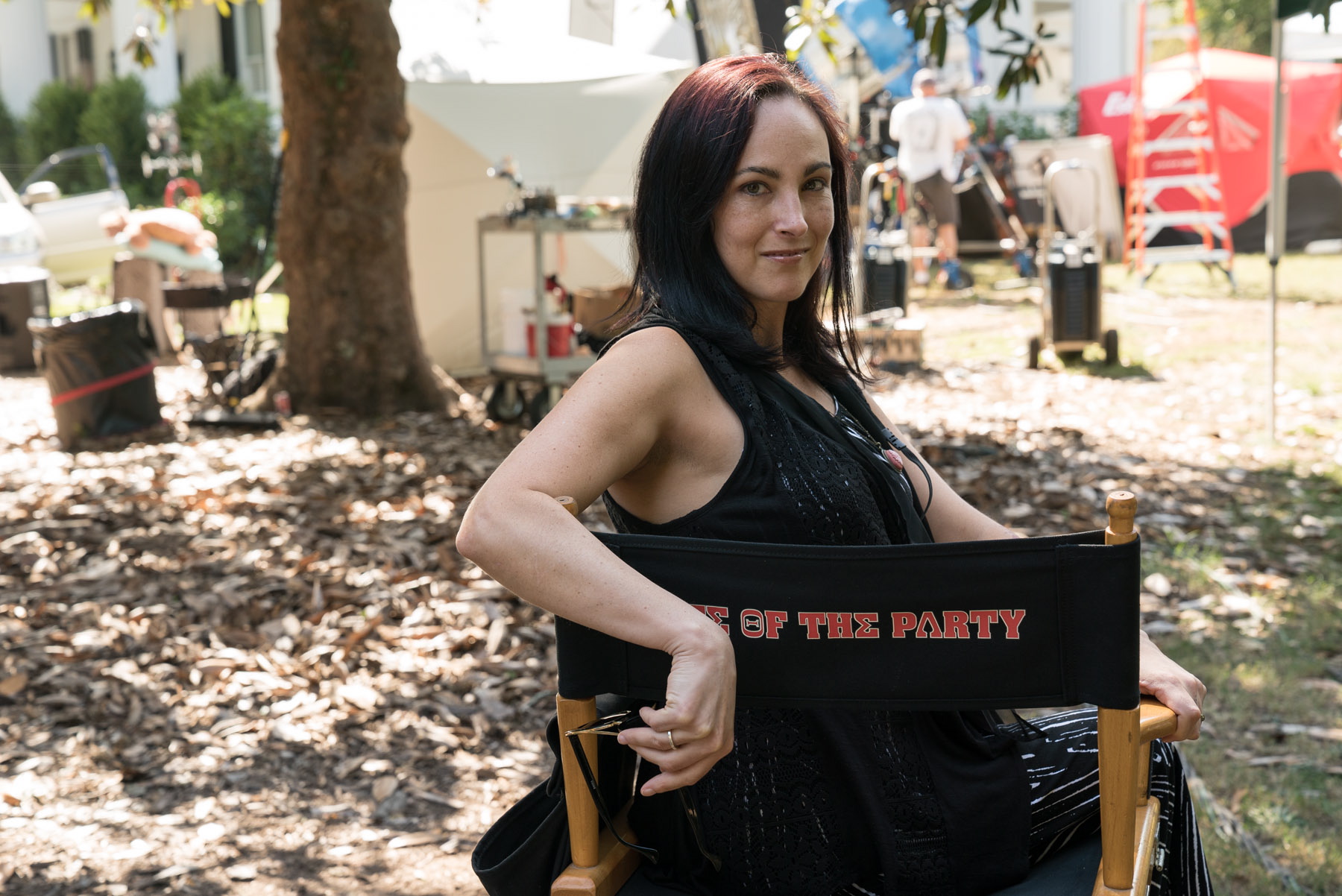 Me on set! Don’t I look fancy?

And yes, she’s just as cool, funny, inspirational, and real as I’d always imagined her to be.

(Melissa, not the Marla. Though Marla has her own special qualities.)

After our chat, I wanted to share 9 things we discussed that I think so many moms can totally relate to, to know we’re all human, we’re all doing the best we can, and we’re all in this crazy parenting thing together, no matter how successful we may become.

1. It’s easy to get stuck in a rut, especially after you have kids.
I know it happened to me — you have kids, and suddenly you’re going to bed at 8pm, not going out to dinner, not seeing movies in the theater anymore. But Melissa, and her character Deanna (who becomes known as Dee Rock once she embraces her new life) believes you should always keep possibilities open.

Life’s not over when you have kids. You’re not done once you’re out of your 20s. ‟You can redefine yourself,” Melissa told me, hinting that she might move to Portugal at age 70 and grow beans.

2. Mom guilt is a waste of time.
Melissa mentioned that her mom worked, as did the mom of her husband, Life of the Party director, and co-writer, Ben Falcone. But back then, moms didn’t seem to have as much guilt around working. They needed money, so they worked, and then they made sure their time with their kids counted.

‟All our modern guilt is crazy,” Melissa said.

3. Melissa’s favorite app as a parent is…Facetime.
It’s not about what friends ate for lunch or filling in “What Gilmore Girl Character Are You?” quizzes. Come on, she’s busy!  What Melissa loves about Facebook is that it helps her keep in contact with her kids while she travels.

She told me, “if I can’t be there, at least I can get their eyes. I can see what they’re doing. I can do homework. I mean, it’s a good thing to fill in the day because they see me watching them.

Then she added that she can be on Facetime just enough to know that she’s boring her kids..and then she feels okay.

4. Sometimes the kids are just not interested in talking to you. Don’t take it personally.
Melissa confessed that sometimes her little one puts the tablet down during a video chat and wanders away, and then Melissa is talking to the ceiling.

Yeah, I feel that.

5. Life isn’t always easy and success can be a long road.
Melissa had to scramble for 20 years to get to where she wanted to be as an actress. She had to work three jobs while still performing theater and taking classes. And so the first time she got to quit a job to be an actress was huge.

In fact, even with the massive success she’s still having, she’s still experiencing some disbelief.  When asked what it’s like to see herself on billboards, she said, ‟Crazy. Crazy. I don’t know if that will ever settle in.” 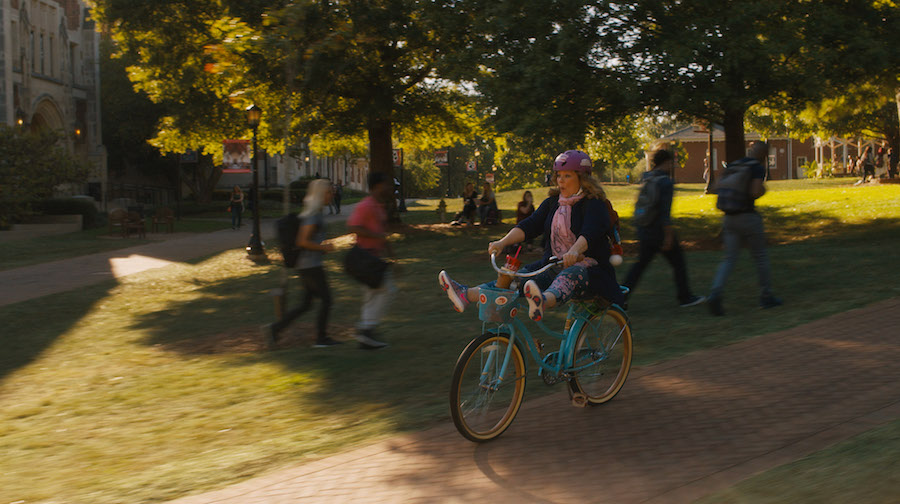 6. It’s important to take a break from work and refuel.
For 16 years, Melissa has been with her husband Ben, who she calls “my favorite person to work with and my favorite person to write with.” (Aw!) They make an effort to take two weeks off to relax and escape every year, and then by the time she’s back, she feels like she’s eager again to get back into a project.

Immediately after, she confessed that “after, like, 45 minutes, I’m, like… I don’t know what to do with someone not in my face!”

A pretty familiar feeling for all busy moms, right? But then, I’m always happy to figure out what to do with myself while “bored” at the beach.

7. It’s okay to work in the car or on the dining room table– and it’s okay to get an office and set up boundaries with your kids.
Melissa and her husband Ben write together whenever they can get a moment. Melissa admitted that she and Ben wrote most of her film Tammy in the car a few blocks down from the house. In the car!  Otherwise, she said, her kids would have been crawling all over while they worked.

‟My little one does not realize you’re not supposed to just, at all times, sit on the [dining room] table,” she told us of their common writing space. Which is why they finally bit the bullet and got a real office out of the house.

Hey, whatever helps you get your work done. It’s all good.

8. It’s important for kids to know the value of hard work.
If her kids ask to get into acting, Melissa insists that she would make them start as production assistants — which is what she did when she was starting out. This way they know what the job really is, and how tough it can be. “They should know how much work. They should know what everybody does. I think that’s a biggie,” Melissa told us.

Tip: When you see Life of the Party, keep an eye out for her daughters, who play flower girls at a wedding. Cute!

9. If you want to find inspiration, just watch the next generation of girls.
I loved hearing Melissa describe how much she adored watching the young actresses who were on set.

“Being around all that energy and watching them be so supportive of everybody, to be so talented and so kind at that age, I think, is really fascinating to watch,” Melissa told us. I think it’s how we all feel as moms, hoping that our daughters will grow up surrounded by even more kindness, support, and love in their lives from other girls, in particular.

Melissa definitely proved this out when I caught her affectionately hug-mauling Molly Gordon, who plays her daughter Maddie in the film.

PS Molly did not seem to mind.

Thanks to Warner Bros. Pictures for covering my travel and accommodations for the Life of the Party set visit, and giving me the chance to interview the wonderful Melissa McCarthy.

Now that I’ve seen her in full-on 80s hair, bedazzled sweatshirt, midwestern mom mode, I can’t wait to see the adventures Dee Rock gets up to in the film, which premieres on May 11, 2018.