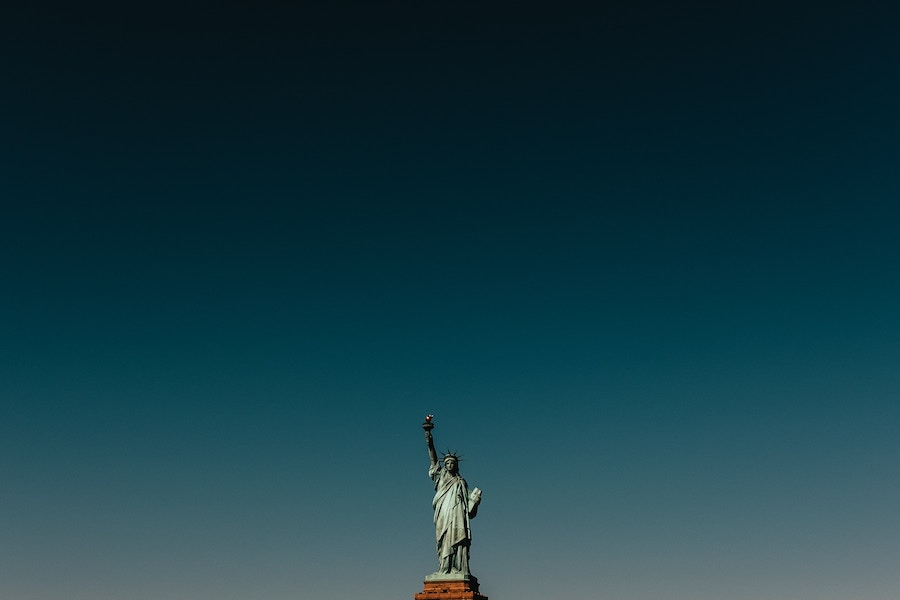 We talk a lot about how to create more kindness and empathy in our kids, when it comes to all sorts of people they encounter in their lives. But top of mind right now for so many of us, are immigrants.

I feel so grateful that my kids are growing up Brooklyn where we hear a chorus of beautiful, diverse accents at every PTA meeting and in the audience at every school performance — Mexican, Greek, Israeli, Irish, Castilian, Eritrean, Albanian, Puerto Rican, Korean, Cuban, Japanese.

(Okay, so we don’t have a second bathroom and it’s not unusual to see a $25 burger. NYC has its trade-offs.)

In our small neighborhood alone, the pet food store owner is Egyptian. The newsstand owner (who always sneaks them free lollipops when I’m not looking) is Indian. Their favorite waiter at the Greek-owned diner is Mexican. The hair salon is staffed with Russians, Israelis, and one hilarious Hungarian who shares my love of 80’s new wave. Taxi drivers, of course, hail from every corner of the earth.

Their stories are so accessible to us — we just have to ask. 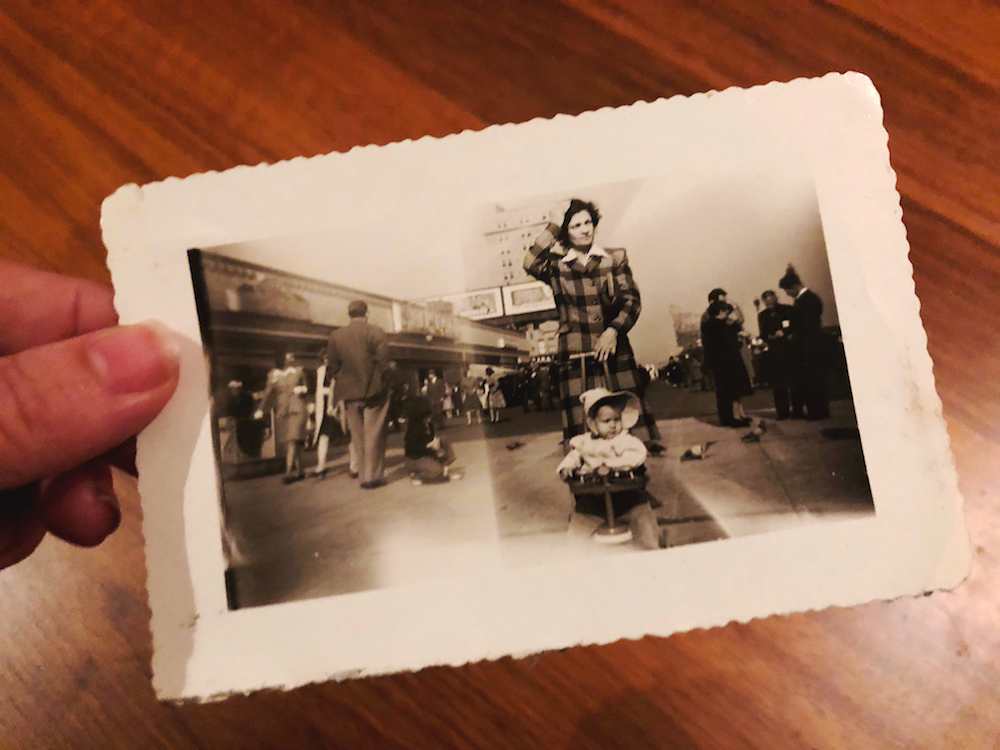 This is my great-grandmother Tillie, who immigrated from Kiev, pushing my mom down the Atlantic City boardwalk, 1943. She was a single working mother who raised three kids in Philadelpia, then later lived with my grandmother and grandfather, and their three kids (including my mom). Tillie was a seamstress and member of the ILGWU, so I  grew up feeling so proud every time we heard the “Look for the Union Label” jingle on TV.

Maybe even from bloggers and parenting writers you’ve known or read for years. 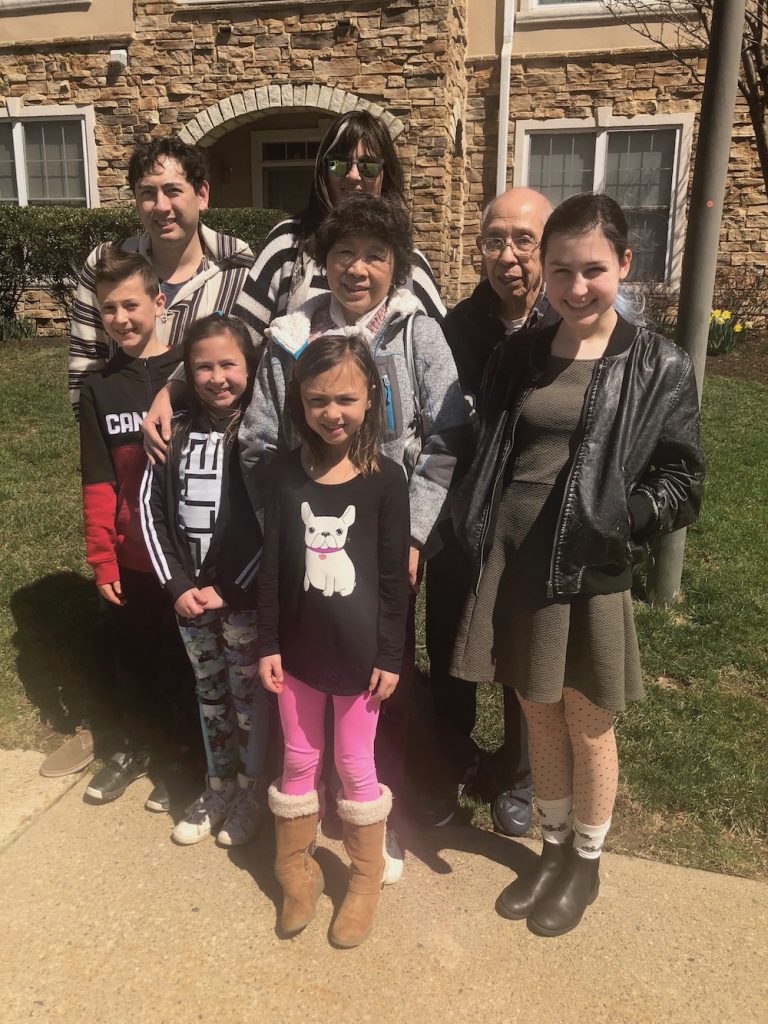 From Cool Mom Picks co-publisher Kristen: This is my family last year with my maternal grandparents. His own father was the first American-born Chinese person in Washington DC, because his grandfather was the first Chinese immigrant in all of DC.  For a long time, they even got birthday cards from the President each year!


I spent much of today seeking out some of the most poignant, the most thoughtful, the most passionate and reflective essays from my parenting writer peers about what it means to be a first or second-generation American right now.

Of course not all immigrants are treated equally here. As my friend, children’s author Amy Ignatow wrote me, I feel like being the daughter of a Dutch immigrant hasn’t given me too many hurdles besides a mild disgust over what Americans think of as “licorice.”

That’s why I love reading these different perspectives from writers whose families hail from Cuba, Vietnam, Poland, Chile, India, South Africa, and beyond. If I had more time, I’d find even more.

It’s worth clicking through to read the full posts; each of these moms and dads are each so generous in sharing such personal, poignant stories with the world, that we might benefit from their experiences — and our kids might benefit too.

From Refugee is Not a Four-Letter Word
by Thien-Kim Lam, blogger, food writer, and publisher of Not the Nanny

In April of 1975, mere days before Saigon fell to North Vietnam’s communist leaders, my grandfather secretly gathered his entire family onto my uncle’s small fishing boat. Thirteen men, women, and children set sail with no set destination. My grandfather only knew that a United States naval ship was somewhere off the coast of South Vietnam. He gambled on a rumor; the equivalent of a stranger pointing, “It’s that way.”

Floating on that small boat meant leaving everything and everyone they knew. My grandfather had witnessed life under communist rule once before and refused to put his family through it. Floating on that boat also meant forsaking their own country. If they were caught by the North Vietnamese, they would be considered traitors. Floating on a fishing boat in a vast ocean meant that possible death would be preferable to living under a communist regime. 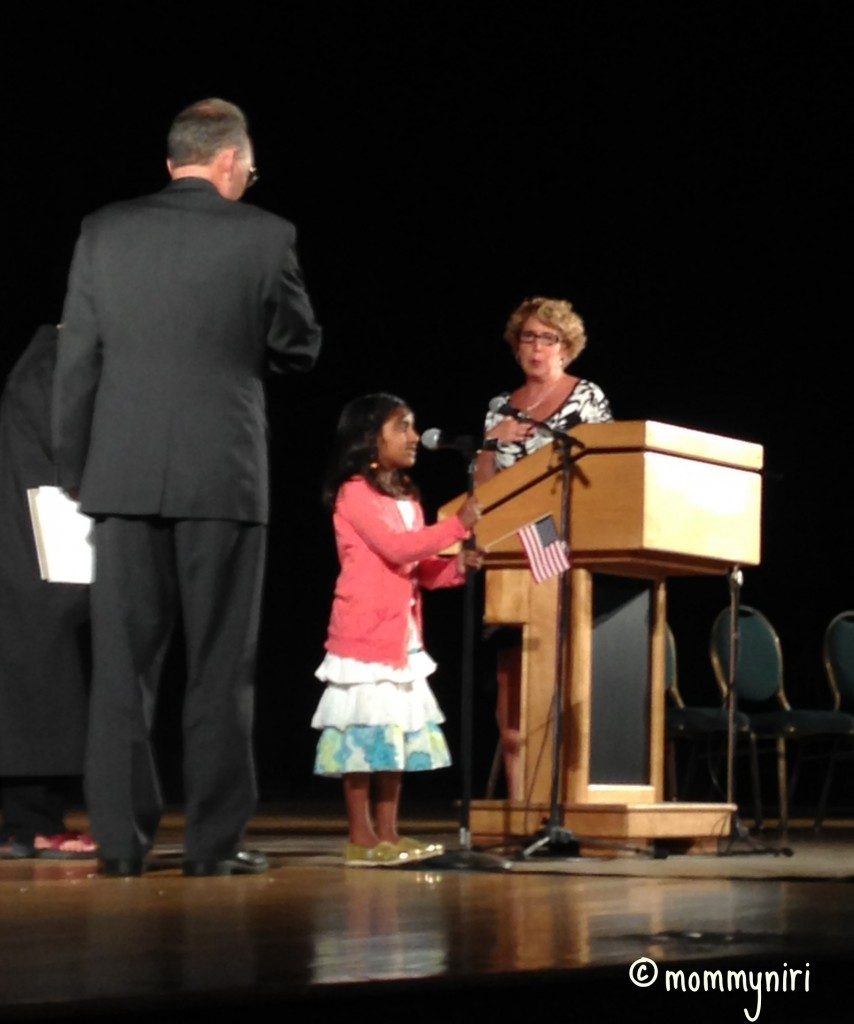 From On Becoming American
by Nirasha Kumar, writer and creator of Mommy Niri

That morning we got the green light and the anxiety of “OMG this is a big day for me” becomes “OMG what if my kiddo forgets it on stage. In front of over 1000 people.”

The judge held her hand. She sat on stage throughout…They announced her name and she said the pledge perfectly. Oh, my heart!!! My daughter stayed on stage until they sang Star Spangled banner when she ran off the stage to me to stand next to me.

I looked at the eyes of the applicants, 92 countries represented, and could see the pride reflected as they shared with me watching my baby. She was one of them. Hope permeated the hall.

From Our Legacy of Immigration and the American Dream
by Vanessa Bell, writer and creator of De Su Mama

For many years, although they spoke Spanish, I fought tooth and nail to be accepted as a Cuban American. According to Papi, I was American only — a birthright that no one could take away from. Cuba had become a part of his identity that only expressed pain, anger, and rejection. But I loved being Cuban. Also, claiming to be Cuban allowed me to explain my heritage in my very white American life; back then, in Southern California, if you were Latino, you were Mexican. Most people had no idea where Cuba was. The confusion of national identity versus cultural reality wreaked havoc on my self esteem. Papi didn’t care though — he wanted my American birthright to overshadow our family legacy of immigration.

He wanted to protect me. I understand that now. 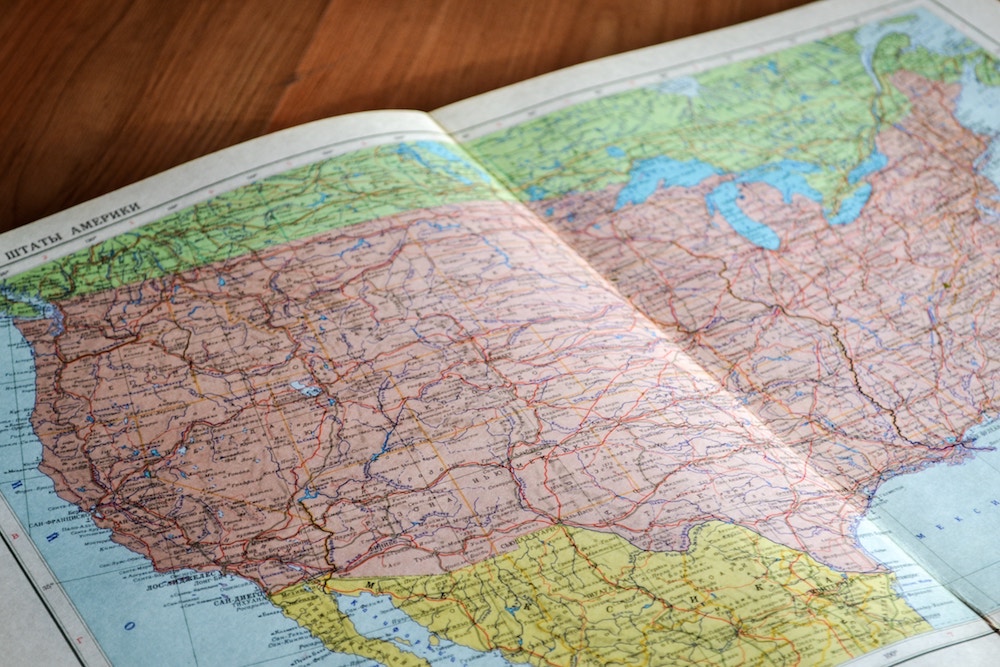 From What Being an Immigrant Means to My Immigrant Family
by Jeanette Kaplun, TV personality, journalist, and founder of Hispana Global

Diversity enriches us, but more and more people seem to disagree with the notion that we can all find a way to respect each other. I can’t wrap my head around half of the things I hear and see on the news and social media. Banning an entire group of people due to their religious beliefs is contrary to what this great country stands for.

Inciting hatred against minorities and immigrants does not make America great. It makes it more violent; it divides us, and therefore weakens us even more.

“There is power in individual voices,” [First Lady Michelle Obama] told us that day. And she is right.

From America the Beautiful?
by Ilina Ewen, activist, mom and writer

My parents immigrated here and no one loves America and fights for her more than my family. We knock on doors and make phone calls for candidates, we write to our legislators, we vote, we welcome newcomers to our table, we volunteer in our communities, we celebrate our country with a deep, earnest passion every July 4th. My parents gave us a life in America where we have wanted for nothing, and we learned to pay it forward in our actions and service.

Yet America is letting me down right now.

Imagine being brown in this country right now. My sons have been taunted and told that Trump will make them leave America. I’ve shielded them from this as much as I can, scurrying in a different direction when such ire is fired. We’ve been followed in stores and treated with distrust. To a kid, this is a palpable sixth sense and they know that something isn’t right. I have been yelled at and told to “go home.” Children dressed as Trump knocked on my door on Halloween reeling off a series of insults. My sons are constantly barraged with the question, “What are you?” Imagine how that would make you feel.

From Why We Need to Be Open to Refugees
by Allison Czarnecki, writer and publisher of Petit Elefant

My husband was young enough when his family escaped from Poland that he doesn’t have an accent.  He doesn’t look that different, unless you get up close and personal.  He seems just like a “regular American guy” because he is….But coworkers and new acquaintances have no problem making racist jokes straight to his face.

“Did you hear the one about The Pole?”

Yes, yes we have heard that one actually.  And every other one too.  Would you like to know where all the Polish jokes come from?  They’re Nazi propaganda started by Hitler.  Because Hitler hated Poles as much as he hated Jews, and did his very best to completely obliterate them as a people.

What do you do when you want to get rid of a population, to turn other people against them?  You start by minimizing their humanity.  Talking about all the ways they’re coming after your money, your homes, your children, your freedom, your religion.  Dehumanize them, and then it isn’t so hard to hate them. 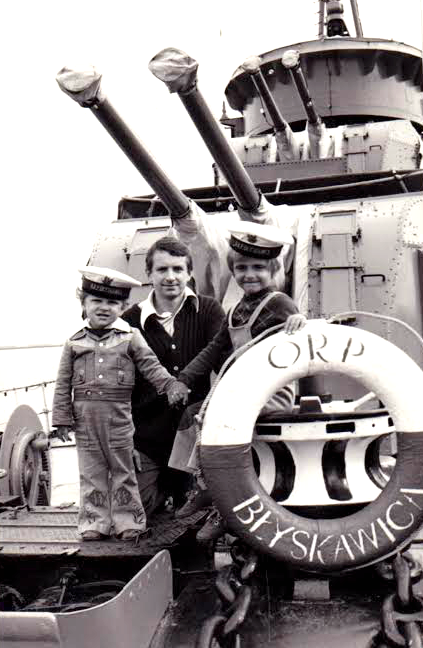 I find today’s atmosphere of fear, isolationism, and nationalism very scary, and very close to my heart.  The United States welcomed us with open arms, regardless of the fact that we came from a communist country. We were welcomed without fear that we were masquerading as refugees whose true goal was to do harm to America, and to subvert the American way of life.

Today people in war-torn countries, such as Syria, are not abandoning their lives, their families, and their homes, just because things are inconvenient. The war in Syria is real, and people are dying each and every day. People are not choosing to climb into overcrowded boats, with their small children in tow, to sail for Cyprus in stormy seas in the middle of the night just because the price of bread is too high. People are choosing to place their own lives, as well as the lives of their children, into the hands of smugglers and war-profiteers, because doing so is safer than what they are leaving behind.