Be More Chill: Your teen’s favorite musical that you’ve never heard of 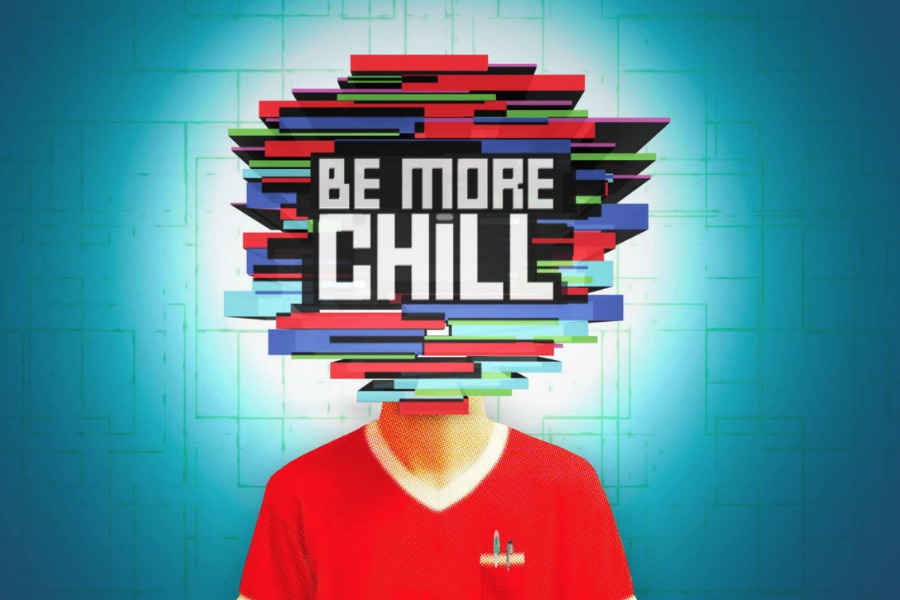 This post has been updated with new information and photos

80’s kids had Fast Times at Ridgemont High and The Breakfast Club. 90’s kids had Clueless. Millennials had Mean Girls and She’s All That.

If you haven’t yet heard of this cult hit musical that’s opening in previews Off-Broadway starting tonight, then clearly you have never been within four feet of my 13-year-old daughter for the past year. Because Be More Chill is, quite literally, all she talks about some days.

And thanks to the brilliance of Lin Manuel-Miranda, who’s gotten a whole new generation of kids excited about musical theater, you may be surprised to learn that your teen loves BMC too. (As the kids call it.)

In fact, if they’ve ever hummed a few bars from Hamilton, Mean Girls: The Musical or Dear Evan Hansen, it’s highly likely.

Update, 9/5/18: The show has been so successful, they’ve just announced that Be More Chill is coming to BROADWAY on February 13, 2019!

Related: Should your kids be watching 13 Reasons Why? 15 must-read articles to help you figure it out. 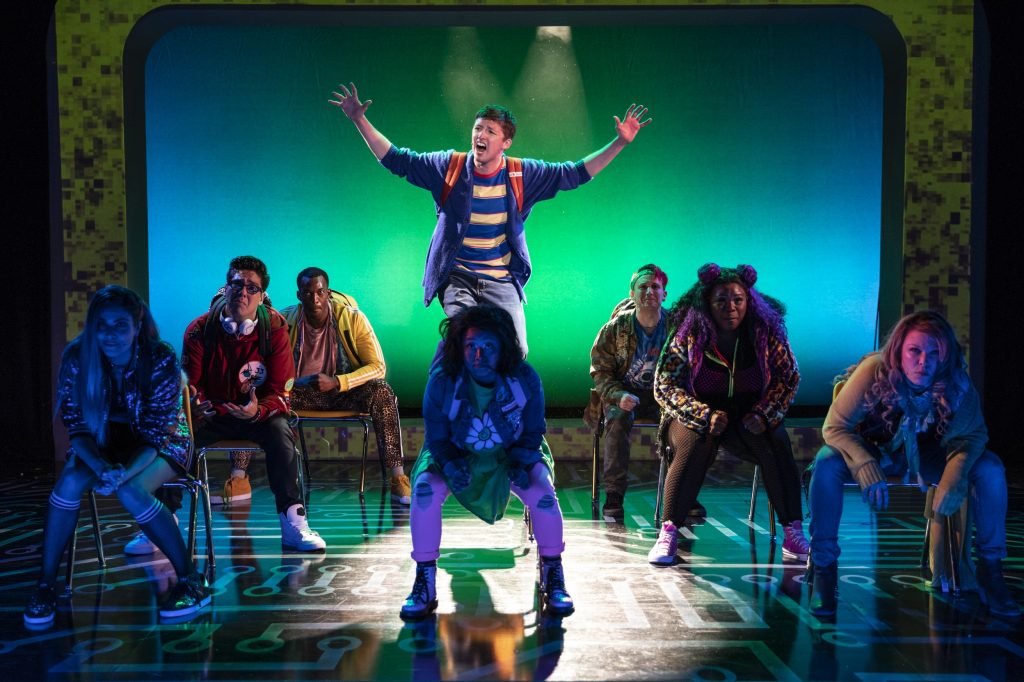 Will Roland, Stephanie Hsu and the cast of Be More Chill © Maria Baranova

While it doesn’t quite (yet) have the reach of a blockbuster film, Be More Chill could easily be this generation’s coming-of-age high school outcast story, complete with romance, rejection, bullying, texting, a boozy house party gone terribly wrong …oh, and a Super Quantum Unit Intel Processor pill that you take with Mountain Dew until it implants in you brain and tells you everything you need to do to be cool and fit in.

Yeah, one of those.

So you can see why kids would love it. But when a theater-loving, adult friend of mine mentioned Be More Chill as “the show that’s getting all the buzz right now,” I knew BMC was about to break out of the realm of online teen fandom and into the big time.

Be More Chill: The Backstory

Originally a popular YA sci-fi novel by Ned Vizzini, Joe Iconis and Joe Tracz adapted the story into an original musical that ran for several weeks in 2015 New Jersey’s Two River Theater. Thanks to some rabid fans, a Broadway-caliber cast, a bootleg video, and the virality of the internet (seriously, check out the #BeMoreChill hashtag on Insta or Tumblr), it blew up. To say the least.

The story is equally hilarious and poignant, relatable and bizarre, irreverent and thoughtful.

Even if you know nothing about the story, just listen to George Salazar sing Michael In the Bathroom and I challenge you not to cry as it brings up every teenage memory you probably want to repress.

I am hanging in the bathroom at the biggest party of the fall
I could stay right here or disappear, and nobody’d even notice at all…

(Listen through to the end. Trust me.) 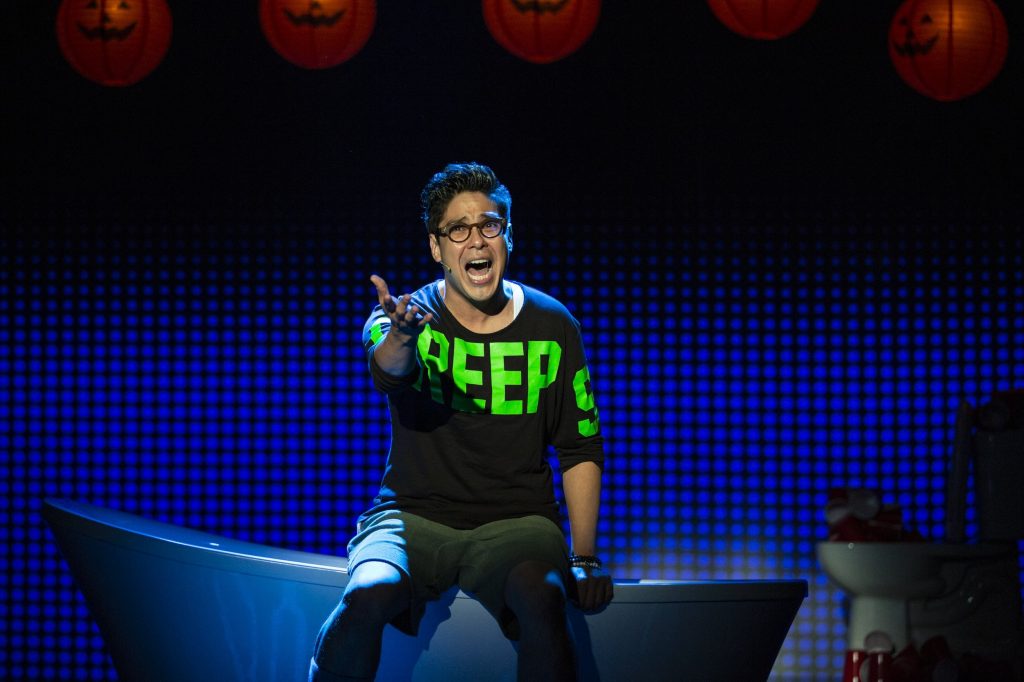 Another hint of what you’re in for comes from The Smartphone Hour, a decidedly NSFW, 21st century update of Bye Bye Birdie‘s The Telephone Hour. Though Hugo and Kim getting pinned have nothing on Rich burning down a house.

A 13-year-old BMC superfan in her own words

Before my teen daughter Thalia headed off to performing arts camp this summer — and she actually had second thoughts about going because OH THE HORRORS OF MISSING OPENING NIGHT —  I talked to her about Be More Chill, including why she thinks it strikes such a chord with other teens, and just what makes it so special and meaningful to her.

Why do you think Be More Chill is so popular with kids your age?

Thalia: Besides all of the fictional supercomputer stuff…it’s really about a kid (Jeremy) who’s a junior in high school, he’s normal, he doesn’t fit in, and doesn’t feel like he’s special and I think lots of teens can relate to that.

Also the music is fantastic, so theater kids really love it.

My favorite songs are The Squip Song [The Super Quantum Unit Intel Processor pill] because Rich is my favorite, and also The Smartphone Hour because it’s so catchy and funny, and it really represents teens today, like how we’re always on our phones and stuff. The texting jokes are hilarious. Christine singing I Love Play Rehearsal is so funny too, and of course I can totally relate to it.

It’s also really popular with LGBTQ kids because it’s so much about not feeling like you fit in. There’s actually a lot of Be More Chill fan art and fan fiction shipping the different characters, like Jeremy and Michael. 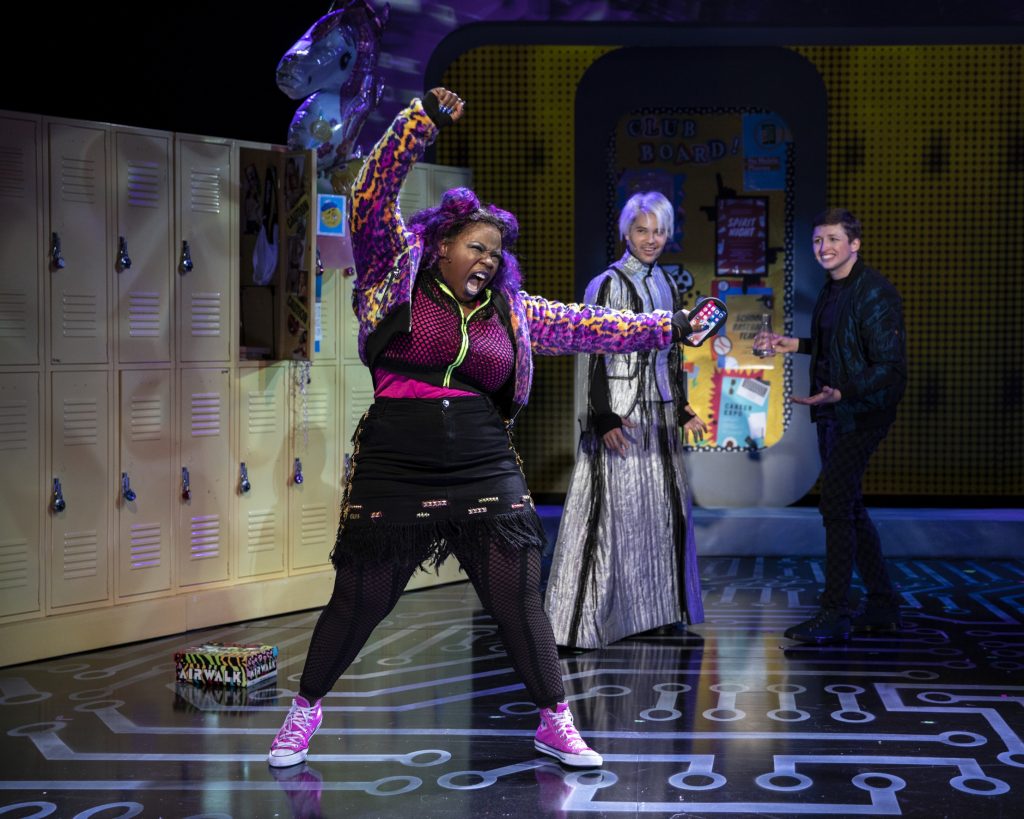 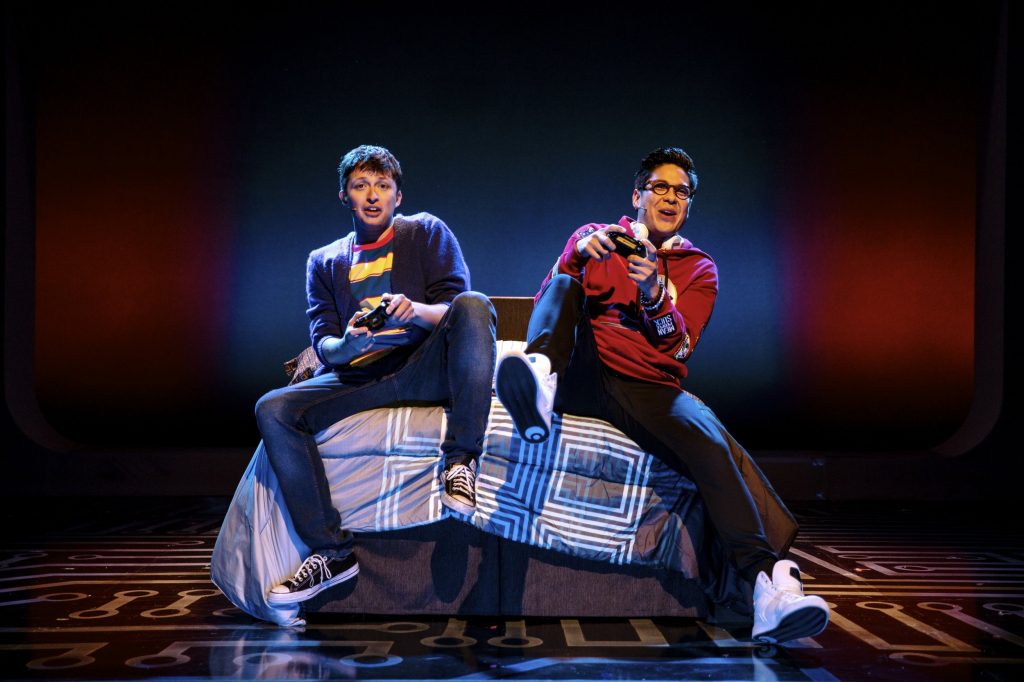 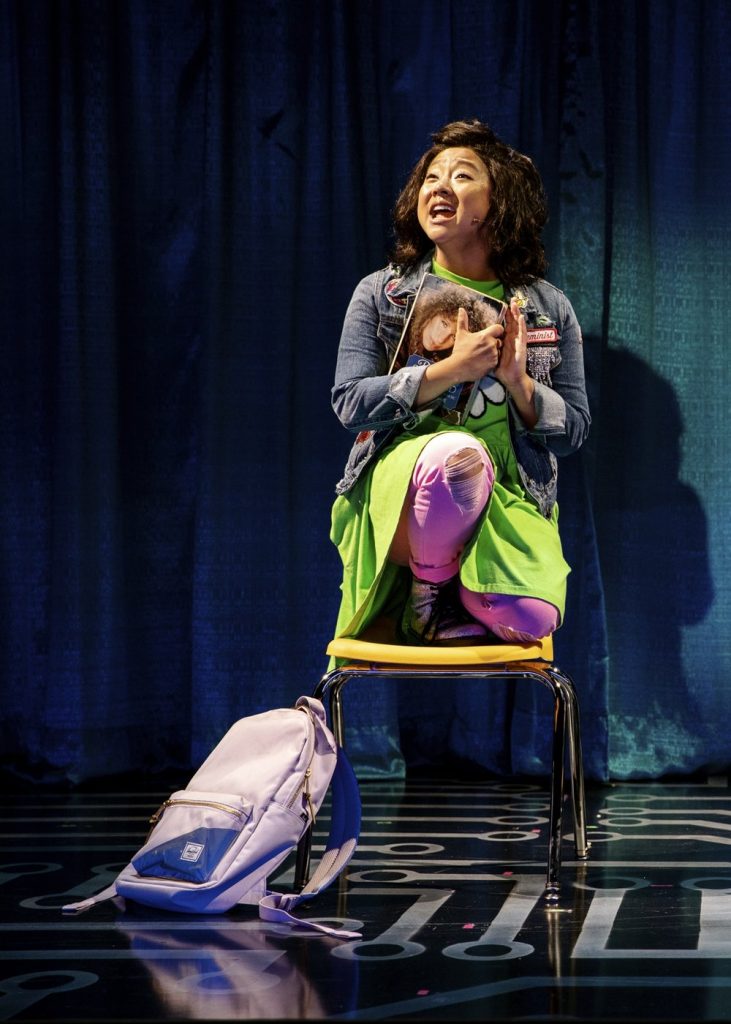 Stephanie Hsu as Christine in Be More Chill © Maria Baranova

Who do you think this musical is for?

Thalia: If you like the musicals Mean Girls or Heathers it’s got that same kind of dark humor. Also, if you want to move on from a Hamilton phase, this is a good way to do it. I think it’s a good way to get kids into theater, who don’t think they like theater, actually.

I actually think the musical is better than the book. I wasn’t that comfortable with the book; there were some intense make-out scenes and drug use and I don’t want to read about that so much. That’s not really in the musical.

Also in the musical, they changed the plot, making The Squip a bad guy, and making all the other characters more likable. That also makes the ending more intense because you really are rooting for all of the characters.

But yeah. you have to be okay with cursing and some dark humor and sex jokes. But that’s kind of everything these days.

How much do you think the cast has to do with the success of the show?

Thalia: They are all so amazing! I love Gerard Canonico as Rich. And Lauren Marcus (Brooke) and Katllyn Carlson (Chloe) are super nice in real life and I love them. And George Salazar (Michael) is really really talented. Michael in the Bathroom makes me cry every time I hear it.

They are so great with engaging with their fans on Instagram and stuff, and I think that really means a lot to the fans because so many of us are just kids. Like they like our posts and they share our fan art!

I basically want to be best friends with all of them.

Just realized I missed #fanartfriday because I was so busy meeting so many of you at the #bemorechill box office opening event on Friday!! And a bunch of you brought your amazing art along to share with us, so it still felt like Fan Art Friday to me ?. It was so awesome meeting you guys. It’s truly inspiring to meet people like Thalia here, who’s a talented artist AND a budding activist- her mom told me Thalia led her school’s walkout for gun control! ✊✊✊So impressed and inspired by you awesome fans. Thanks for coming, those of you who could make it!! Keep kicking ass- we cannot wait to do this show for you all!!! ??? #bemorechillmusical #bemorechillfanart #bmc #fanart #activism #chloe #chloevalentine @bemorechillmusical @bemorechillfansofficial

(Editor’s Note: Katlyn Carlson shared Thalia’s fan art on her Instagram feed and I can safely attest that she’s landed a fan for life.)

What are you most looking forward to about seeing Be More Chill Off-Broadway?

Well, I am so happy that so much of the original cast is coming back. But I’m really happy that the new cast is more diverse than the original run which was all white, except for Stephanie Hsu (Christine). Britton Smith is playing Jake and Jason Tam is The Squip and I can’t wait to see them.

Also Will Roland from Dear Evan Hansen is Jeremy which is amazing! He was so nice when I met him.

It’s going to be amazing! Make sure you them all to break a leg and that I’m sorry I’m at camp but I’ll be there two days after I get home! 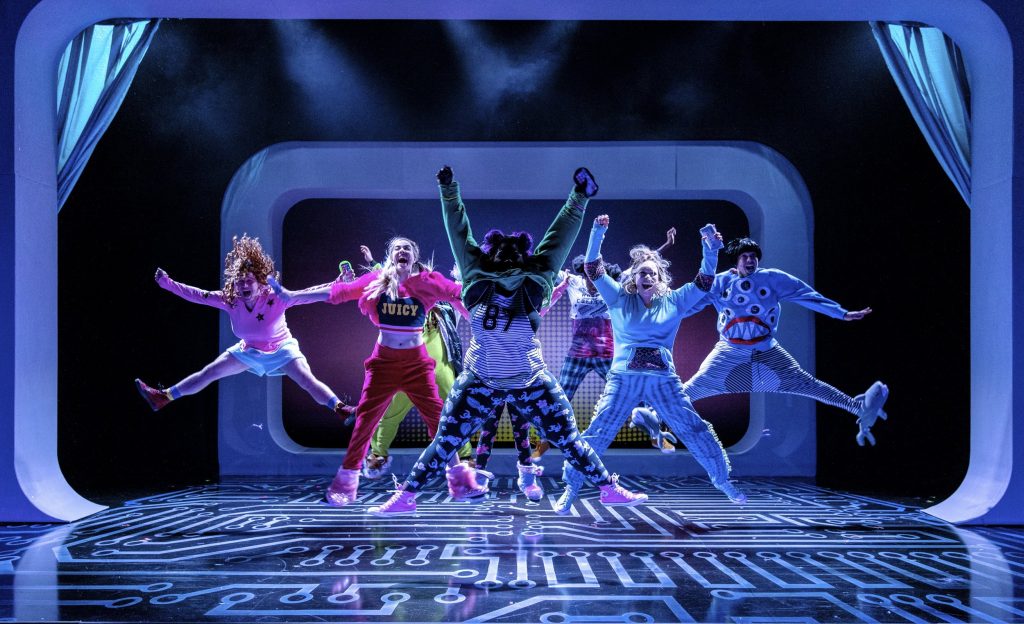 UPDATE:  Be More Chill BROADWAY has already closed, but keep an eye out for touring performances near you now and in the future.

And a personal thanks to the cast for being so incredibly nice to one 13-year-old fan in particular, who shows up at every cast event she can, likes every Instagram post, and is currently writing you all letters from camp.