Awesome action figures for girls that are actually for girls. 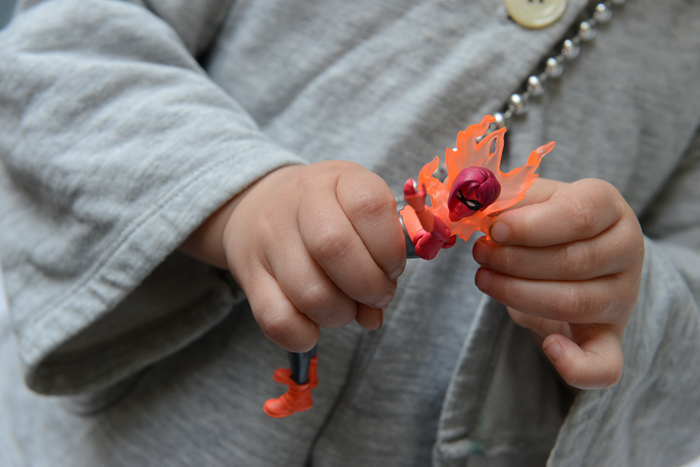 I have always said that I’m not anti-princess, just pro-choice. When it comes to my daughters’ toys, I’ve always wanted them to have a variety, which is why we don’t limit ourselves to “girls’ aisles”  in toy stores. And now IAmElemental comes along and gives us actual action figures for girls–a phenomenal option to inspire creative play right alongside their action movie-themed LEGOs  and rag dolls and American Girl Dolls and everything else in the toy chest.

Still in the midst of a wildly successful Kickstarter campaign, this mom-run company is reinventing the female action figure, with a series made for actual girls to play with–instead of adult collectors to ogle. You know what I’m talking about if you’ve ever looked at other “action figures for girls.”

(Let’s just say it I would find it mighty hard to fight crime with DDDD cups supported only by a one-inch wide elastic band.)

The Elemental figures’ 4-inch tall bodies, while still shapely, are more athletic and healthy. They’re posable and bendable and able to slay dragons and topple evil empires of all kinds from what I can see. And what I really love is the idea that all seven figures are imbued with powers that come inside of her: Bravery, Energy, Enthusiasm, Honesty, Industry, Persistence, and on the darker side, Fear.  There’s a little back story for each, and she comes with her own shield and  a related accessory.

Plus, each one is deliberately ethnically ambiguous which is a great touch. Because traits like honesty and persistence are universal.

Is there some pink? Sure. Also purple, red and turquoise. But while some girls will be more drawn to the look of a particular character, others will be drawn to the character herself and whether she can see herself in her attributes. I know my oldest daughter would go right for Bravery, even though the figure has no long, flowing locks or velvet robes–though she does sport some rockin’ shoulder armour. And the wings on Honest are pretty freaking awesome.

While I would love them to come in larger sizes (Fear might want to sleep in a Dream House too, you know), for now they’re going to be sold in small mystery packs, like LEGO Minifigs are.

I think the best part about IAmElemental action figures is, as with all creative playthings and even Waldorf style dolls, the characters’ backstories are only a  jumping off point. Kids have the beautiful ability to create their own scenarios out of almost nothing, instead of recreating a scene from a movie or comic bookNot that I would mind an IAmElemental movie–I can only imagine who would get to wear those wings.

The Courage series of IAmElemental Action Figures for Girls (and boys) are for kids 4+ and are now available at the IAmElemental website.