Everything is awesome with the new Lego Movie sets 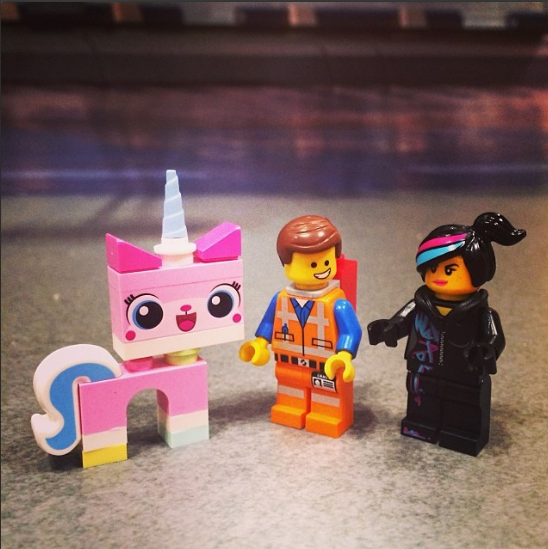 Oh you knew I’d go there with the headline, didn’t you? What can I say, just as I said in my Lego Movie review, the song has been stuck in my head for life. Another thing you probably knew: the Lego Movie sets were not long to follow the huge success of the film.  You’re just that smart, aren’t you.

We gave you a sneak peek of the Lego Movie Minifigures on Instagram, live from Toy Fair last week, and now you can find them all as part of more than a dozen Lego Movie sets which are so imaginative and fun, I kind of want them for me. I think that kids who have seen the movie will especially appreciate them, but if you ever plan on seeing it, I’d say snatch one up now before they’re all in the awful scalpers’ hands. Oh…did I say that? I meant resellers.

A great place to start is Lord Business’ Evil Lair Set–I’d buy it just for the TV studio with the Where Are My Pants sign, though there’s way more to it than that. This is on the pricier side, but you do get more than 700 pieces. Including a toy Kragl which is key. (You don’t want your kids rummaging through your drawers and using the real stuff.) Plus you get to have Will Ferrell’s voice in your head saying BWAHAHAHA , so that’s a bonus, I’d say.

If you gravitate to the heroes over the villains, there’s a 514-piece Lego Movie Super Cycle Chase set which gets you Wyldstyle and Emmet along with two nifty vehicles. It also comes with three menacing Robo SWAT minifigures and a whooooole lot of weaponry. (Fair warning, should that be an issue for you.)

On the softer side, whether your kids have seen the movie or not I’d  imagine they’ll have a fun time with the Lego Movie Cloud Cuckoo Palace Set. It’s under $20 for a 197-piece set which is a great deal and a perfect birthday gift. Plus the flower catapult is a little more cheery as an attack mechanism than what the other sets offer.

For the ultimate Lego Movie sets collector’s splurge, there’s the Metalbeard Sea Cow Pirate Ship Lego Kit–which happens to be about 50% more on Amazon, so we suggest comparing prices at the Lego store first. This is the big ticket item of the lot, and more challenging from a building standpoint. The pirate ship alone rocks, but I love that it comes with five minifigures (Vetruvius! Unikitty!) and Emmet’s double-decker couch.  In fact, you’ll score more than 2700 pieces, which for kids means Yay! For you, it means better have your LEGO storage ducks in a row before you take the the plunge.

For another option in the under $30 range, kids will love the Lego Movie Flying Flusher set, because honestly, bathroom humor never gets old. It comes with a 2-in-1 plumbers van, which you can convert into the Flying Flusher complete with the all-important (and funny to fifth-graders) toilet seat.  Just know this one doesn’t come with any of the main characters, which means you have to hit the minifig packets at your local toy store until you score some, or start with a different set.

Along the same lines is my favorite of the smaller Lego Movie sets: The Lego Movie Ice Cream Machine which lets kids build an ordinary ice cream van with lots of fun gadgets attached, then convert it to a flick-missile-shooting Bondian vehicle. Only with far more fuschia than James ever encountered.

The thing I like best is that, as with all Lego sets, they are designed to work together. It doesn’t matter if you stick Harry Potter into Metalbeard’s ship, or use Emmet to commandeer the Millenium Falcon you already own–or just have them all hang out with the Lego Friends and plant sunflowers. If there’s one thing you take away from the movie it’s that sometimes, you can throw away the instructions, ignore the picture on the box, and just play.

Find all the Lego Movie sets at our affiliate Amazon, at the Lego Store online, or visit your local indie toy store.

In honor of MLK day, we are focusing our energy on